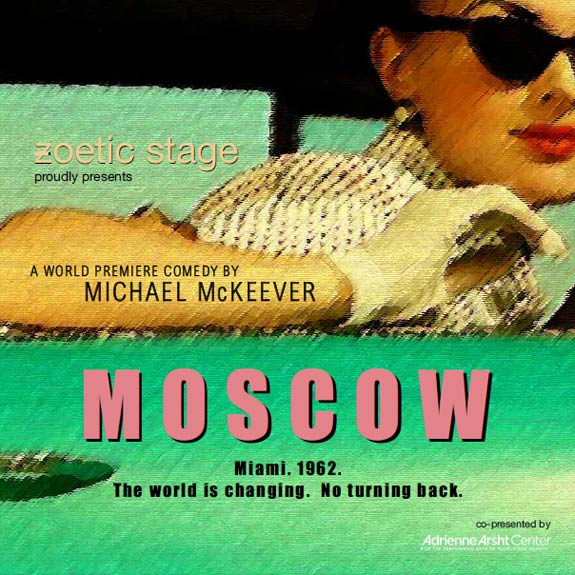 
Miami, 1962. The members of a once prominent South Florida family find their world challenged by the life-changing events of the era. The Kennedy assassination, the Cold War and the sudden influx of Cubans to Miami set the stage for an all out showdown as past, present, east and west all collide in this comic look at how we got to where we are today.


It’s a lot of info to pack into two hours and fifteen minutes, yet McKeever is able to keep his characters interesting enough that you buy in to the neurosis, paranoia and plain old sarcasm they deliver in this slice-of-life look into their daily lives.

Lorelei Montefiore Porter, played with just the right amount of acerbic edge by Irene Adjan, is the modern matriarch of the home...  Lucy Montefiore (Margery Lowe), a singleton who jumps from one artistic endeavor to another, yet never really finds her place...

Both Adjan and Lowe relish the chance to not only use McKeever’s words to entertain, but to convey a deep-seeded sibling rivalry that continues to unravel as the play careens down the track. It’s when McKeever adds layer upon layer to his story that it becomes cumbersome. The introduction of Lorelei’s husband, played by Tom Wahl, while necessary, takes the play into a spiral of Soviet angst and overdrawn political commentary. And while crucial to the family’s relationship, at times, it gets a bit too bulky.

McKeever packs Inez’s toolbox with one-liners, physicality and dry wit. As Inez, Elena Maria Garcia steals the show... Garcia performs some fantastic physical comedy while cursing her fate in Spanish, and it’s one of those great moments in theater when you watch an actress create a character that’s never been played before. In Act II, though, the poignant stories of her Cuban past could resonate more if they weren’t littered with so many heard-before clichés.

Lela Elam has the acting chops to pull off Olivia, who has been given many of the dramatic scenes in the play. Yet, she too, has to carry the weight of an entire culture – in this case the inhabitants of Overtown – on her shoulders.

Director Stuart Meltzer keeps all this action, which is confined to one space throughout, moving swiftly along. His actors have a clear path to follow despite them having so many balls in the air at one time, so to speak...


With its world premiere of Michael McKeever’s rich, rueful comedy Moscow, Miami’s Zoetic Stage stakes a persuasive claim to being the newest gem in South Florida theater. Given the loss of two companies in less than a year, not to mention the precarious state of a few others, Zoetic’s emergence couldn’t come at a better time.

Artistic director Stuart Meltzer has beautifully staged Moscow, as he did Captiva. And once again, Zoetic’s acting company and designers have collaborated to bring a wonderful new Florida story to life.

...McKeever’s 22nd full-length play gets its title from two sources: the early ‘60s segment of the Cold War that made all things Soviet seem evil and ominous, and Anton Chekhov’s classic Three Sisters, in which privileged but dissatisfied women long for the elusive happiness that Moscow represents.

Lorelei passes her time with smoking and cocktails (pregnancy be damned), doling out acid-tinged pronouncements that Adjan somehow manages to make intriguing. Lucy is sleeping with the eccentric Cuban exile who runs her theater company, getting nowhere in romance or life, though Lowe’s luminously played chance encounter with another young exile (Luis Restrepo) will at last jolt Lucy into self-awareness.

That third “sister?” Olivia (an exquisitely moving Lela Elam), the Montefiores’ maid for 24 years...  preparing to leave women who rely on her, grew up with her but will always think of her as the help. So much for sisterhood.

Enter a new maid, Inez (Elena Maria Garcia), newly arrived from Cuba... Despite assurances to the contrary, the formerly wealthy Inez can neither speak English nor clean a house. Oh, she tries, hilariously so. And if the other actors weren’t also so strong, Garcia (here channeling both Lucille Ball and Carol Burnett) would make off with yet another show.

All in all, Moscow is a made-in-South Florida treasure.


Michael McKeever is a brilliantly funny writer and if you doubt that statement just saunter over to the Arsht Center and catch Zoetic's world premiere production of McKeever's Moscow.  You'll know you're getting close to the theatre by the laughter flying around on Biscayne Boulevard.

Hooked to Anton Chekhov's The Three Sisters, Moscow has perfectly acerbic Irene Adjan as Lorelei, the older of two sisters, and, flitting and fluttering from man to man and art to art, Margery Lowe as younger sister Lucy.  And the symbolic third sister?  Devoted, defiant Lela Elam as Olivia, lifetime house maid and baby raiser to Lorelei.

I've got to confess here that no matter how much I was enjoying Adjan, Elam and Lowe I was eagerly waiting for Elena Maria Garcia's entrance as Inez, the replacement maid.   Consummate comedian Garcia made the wait worthwhile.

The second act and it's 1964...  And here, despite director Stuart Meltzer's best efforts, Moscow slows down.   McKeever is a sophisticated humorist but when he leaves the lighthearted, things tend to flat spot.

Moscow is well worth seeing for its pluses:  the acting, the directing and the humor; Sean McClelland's set, Luke Klingberg's lighting, Meltzer's sound and the costumes by Alberto Arroyo are all of the best.

Zoetic Stage presents the world premiere of Moscow at the Adrienne Arsht Center for the Performing Arts through April 15, 2012.
Posted by C.L.J.