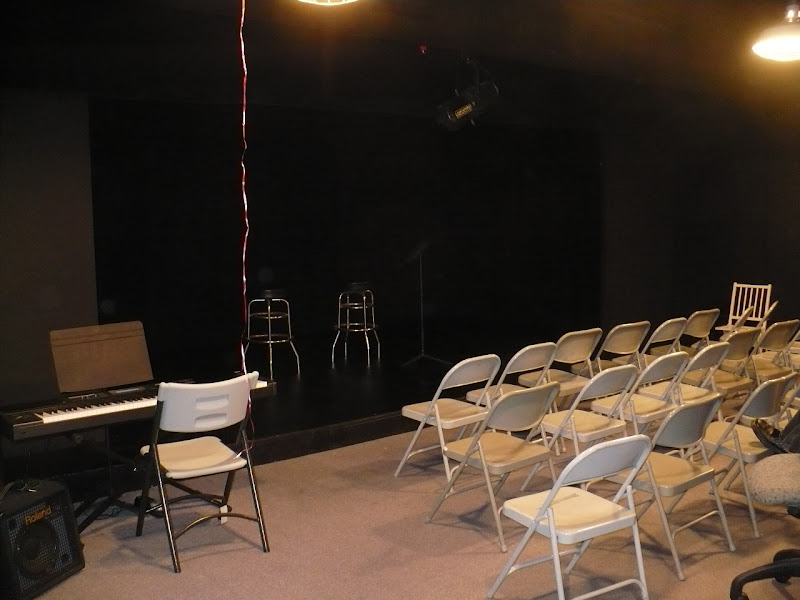 OK, so it's February.  We can deal with the year flying by like this. Well, maybe not, but what choice do we have?  We hear there was a Superbowl over the weekend or something.

Today's "dark" theatre is Andrews Living Arts Studio (ALAS).  Like Actors' Workshop & Repertory Company (AWRC), ALAS strives to educate the next generation of performers while giving them a place to practice their craft as they learn it.  And both companies are run by a man named Bob, but we're sure that's just coincidence.  ALAS will be opening John Patrick Shanley's Doubt later this week.  Maybe it will save you the trip to Jupiter, where the Maltz Jupiter Theatre is also opening Doubt.  (Of course, our advice is to see both productions, to compare and contrast the various choices).

Scoop on Looped
Some of you may recall that Looped, starring Valerie Harper, got its start at the Cuillo Center in West Palm Beach (now home to Palm Beach Dramaworks).  Since then Harper's taken the show to Broadway, and even brought it back to the Parker Playhouse a couple of years ago.  Well, Florida Theater On Stage and The Drama Queen both report that she's bowing out of the tour, owing to illness.  Stephanie Powers will step into the role of Tallulah Bankhead in this not-quite-one-woman show when it stops back at the Parker Playhouse.

"...Or What's A Heaven For?"
The Guardian talks with Marianne Elliott, a director who lives for high-risk projects.

"Theatre is incredibly demanding and you work all the hours – and I'm a mum with a little girl at home – so why bother putting everything into it if you are not producing something that is really worth doing? Something that pushes you and pushes everyone else involved? If it is just another run-of-the-mill show, then what is the point?"

Running with the Pack
The Washington Post, on the other hand, worries that most regional theaters in the U.S. play it too safe, with a tendency to program "the hot new play of the season."

...copycat programming raises some questions about the creative health of the regional theater movement. For a decentralized performing art form that needs to maintain strong community bonds, is lock-step play selection an encouraging trend? ... according to the Theatre Communications Group, the trade organization for America’s nonprofit theaters, nine of the 11 most-produced plays this season opened on Broadway over the past four years. Only “The Whipping Man” (from off-Broadway) and “A Raisin in the Sun” (from 1959) don’t have newly minted Broadway pedigrees.

Among these 11 plays,  Other Desert Cities is playing at Actors' Playhouse, A Raisin in the Sun just opened at Palm Beach DramaWorks  Motherfucker with the Hat played at GableStage a little while back and they'll be opening Good People in July,  The Whipping Man and Clybourne Park were both staged by the late Caldwell Theater Company a couple of years ago.

Healthy trend of sharing good stories, or artistic cowardice banking on a sure thing?  We'd love to hear what you think.

On A Related Note..
... the LA Times asks "what should Broadway be?" and the second TEDx Broadway conference tries to answer:

Man, you won't believe some of the crap the "experts" were tossing around. Not one of them came up with "cheaper."  Which is what Broadway really needs to be; more affordable.  Time was, tickets cost the equivalent of a really nice dinner out. Now tickets cost about as much as two week's groceries.  We can all skip a meal; few can skip eating for a week.

Speaking of Bold Choices
Palm Beach ArtsPaper spoke with Slow Burn Theatre Company, which opened Side Show over the weekend;

The 1997 musical Side Show, about Daisy and Violet Hilton, real-life conjoined twins who exploited their congenital oddity in circuses of the 1930s, was either ahead of its time or simply too weird for a mainstream Broadway audience. It lasted a mere 91 performances in New York, losing its entire investment... All in all, it is an ideal show for Slow Burn Theatre Company, which enjoys not playing it safe.

Working out of a high school auditorium, Slow Burn's production have generally delighted critics and patrons alike, due in no small part to their bold choices in shows.  And they're affordable.

Supporting the Art(ist)s
The Shiny Sheet reports that Palm Beach Dramaworks is taking a stand as South Florida's first regional ambassador for The Actors Fund.

Starting Friday with the opening of Palm Beach Dramaworks’ production of A Raisin in the Sun, cast members will solicit donations for the fund after every performance. Also Friday, Dramaworks will hold a meeting at the theater to inform local entertainment professionals about the fund’s services. A private party for Dramaworks and fund supporters will be held Saturday night at the Palm Beach home of Lisbeth Barron, an investment banker who specializes in the entertainment and media industry.

Dramaworks plans to select one production annually to raise money for the fund. Benincasa hopes to encourage other regional theaters to start similar initiatives.

Speaking of Fundraising
Stage Directions reports that Samuel French is offering an interesting product to offer your patrons.

They now offer customized scripts filled with information about a theatre’s production, including cast and crew lists (and photos), production photos, and Production Pages with space for production team info and special thanks. The books are offered at an introductory price of $9.99, and can be sold at a markup in the lobby at shows or before a show has started to raise funds for a production.

In Wednesday's Off Stage Conversations, Andi Arthur posted a link to Big Whiz Bang, where Phil Johnson gives advice on selling merch in the lobby.  Apparently, people are more interested in t-shirts that read "If All The World's A Stage, Why Can't I get Better Lighting?" than shirts with a show logo on them.

Well, They Say Video Killed The Radio Store
The Windsor Star reports that Theatre Windsor was closed down by.. well, you have to read it to believe it:

...Theatre Windsor’s media manager, said declining membership and audiences can be traced to increased use of personal communication devices such as smartphones and tablets.

“Who wants to go out to a theatre when you can call up anything on your smartphone?”

Doesn't seem likely, does it?  Well, it seems that either the reporter left some stuff out, or his editor screwed him over:

"As a current Board Member of Theatre Windsor I would like to say that this article does not properly reflect the conversation that Mr. Ireland had with Mr. Shaw. This reporter took a single point of MANY given to use as the title and gist of his entire article. Our Board and Membership do not believe smartphones are responsible for not being able to continue making our recently increased rent."
-- Niki Korda

Of course, it's possible that the report is accurate, and no one wants to admit it. Because man, how awful would your programming have to be to be beaten by Angry Birds?

Meanwhile...
...in Coconut Grove, the Playhouse is still closed, but Florida Theater On Stage reports that Actors' Playhouse and the University of Miami made the effort to salvage whatever was left to rot in the building when the board locked the doors.

The librarians salvaged paper records that will be open to the public after a three-year restoration project that could cost more than $100,000, both figures only rough estimates. Actors’ Playhouse may reuse the costumes, a few props and a few pieces of equipment in local productions, said Executive Producing Director Barbara Stein.

We've heard nothing about the other two Playhouses at this time.
Posted by C.L.J.