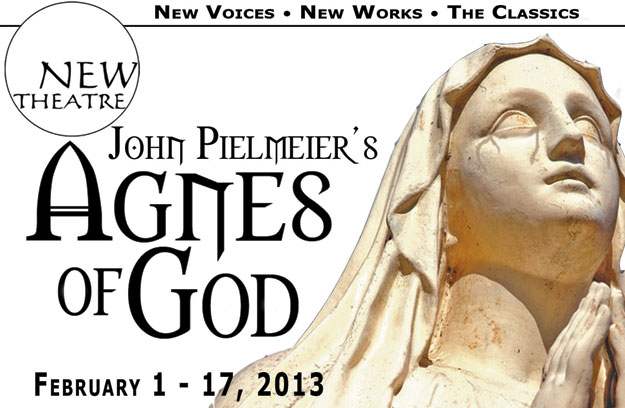 New Theatre opened its production of Agnes of God at the Roxy Performing Arts Center on February 1, 2013.


A riveting classic psychological drama about morals and faith where a young nun, accused of killing her newborn baby, declares the child is the result of a virgin conception.


...for a bare-knuckled battle between the forces of God and the forces of ratiocination, no script is as much an intellectual slugfest as John Pielmeier’s Agnes of God, now getting a consistently intriguing, occasionally engrossing and, in its final scenes, riveting production at New Theatre.

If the chemistry among Christina Groom, Pamela Roza and Barbara Sloan isn’t as electrifying as it could be, all three actresses individually create vigorous and robust characters under Ricky J. Martinez’s direction to deliver one of the stronger offerings that New Theatre has produced in the past couple of seasons.

What this production is missing is the flinty antagonism needed between the psychiatrist and Mother Superior. We’re supposed to sense that each sees this as a very personal life and death struggle; each sees the other woman as threat to something precious in the way each views the world. Instead, we feel each woman only resents the other.

Groom succeeds completely with the toughest job — making credible Agnes’ naiveté that makes the audience vacillate between thinking one moment that she is genuinely touched by God and the next convinced that she is just certifiably psychotic. The looming abyss ofoverplaying both extremes is huge, but Groom deftly sidesteps the danger.

Sloan has proven herself year in and year out as one of New Theatre’s most skilled leading ladies, often putting together a performance that supersedes the material she’s been handed. With a bit of hard-edged sass to her voice, she’s perfectly cast here for her ability to make Mother Miriam Ruth someone with a pragmatic past, thereby investing her spiritual yearnings with integrity. And welcome back, Pamela Roza. Time was when Roza’s presence was enough by itself to make a play worth going to see... Roza smoothly slips on the persona of a haunted woman whose ghosts are just out of sight but never out of mind. Her doctor is suffused with both genuine caring for Agnes and an almost physical need to find a temporal explanation at all costs. She’s especially effective in her monologues to the audience, savoring the precise phrasing of the words.

Martinez gets solid performances from all three women, but Roza has a tough time making Dr. Livingstone s back story compelling, Sloan can t disguise the ridiculous nature of some of the older nun s pronouncements, and Groom (who is clearly not the kid Agnes is meant to be) has a rough time with Agnes more unhinged speeches. She does, however, have a lovely singing voice that adds immeasurably to the production.


...you're going to see the soul of the writer and the actors and the essence of a well-written, well staged deeply moving performance.

Raise your arms high and give thanks to Ricky J. Martinez for casting Christina Groom, Pamela Roza and Barbara Sloan. These three pin you in your seat from lights up to lights down... John Pielmeier's script is tight and suspenseful, posing mystery after mystery in an ever building arc that gives Groom, Rosa and Sloan everything they need to remind us once again why we go to the theatre.

Pamela Rosa as the psychiatrist, Dr Livingstone, carries the bulk of the play. A world weary cynic whose life is changed forever by Agnes and the Mother Superior...

...Groom's Agnes, from innocent angel to raging, instantly aged depraved devil, is a woman of secrets, a sly manipulator and victim in more ways than one should imagine. All three actresses demonstrate great talent, range and stamina during the two hour evening. The scene where Agnes relives the birth of her child reaches a completely unexpected level of intensity and yet, somehow, that intensity is always there, start to finish throughout the play. Director Rick J. Martinez has excelled himself here.

If someone trots up to you in the next three weeks and asks where to find good theatre just point them over to New Theatre and their presentation of Agnes of God.

New Theatre's production of Agnes of God plays at The Roxy Performing Arts Center through February 17, 2013.
Posted by C.L.J.