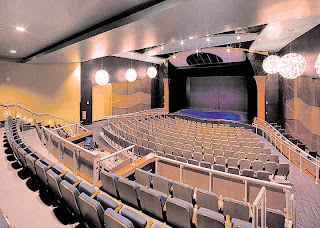 Today's "dark" theater is the Aventura Arts and Cultural Center.  This intimate three year old venue is tucked away along the waterfront in Aventura.  The 326 seat theater is managed by The Broward Center for the Performing Arts, and has hosted off-Broadway plays such as Jim Brocchu's Zero Hour.  And it has the best view from its green room of any theater in South Florida, bar none.

As you sort through your Monday reading list, the reason for its inclusion today will be revealed.

Up Close at the Arsht
The Adrienne Arsht Center for the Performing Arts has announced its line for next year's Theater Up Close program.  This year's line up included Chicago's House Theater, resident company Zoetic Stage's season, and Alliance Theatre Lab's Brothers Beckett re-mount.

Florida Theater On Stage sums up the Arsht's program best:


Theater Up Close is a rarity in South Florida – an ongoing cooperative effort between a major facility focused primarily on presenting visiting productions and mostly local companies that otherwise would not have access to such sophisticated resources.

Of course, The Miami Herald also takes a look at next season's program line-up:


“All of the shows center on the same theme,” says Scott Shiller, the Arsht’s executive vice president and the driving force behind the series. “It’s the theme of history and mythology, and the thin line between them. Our histories change, depending on who’s telling the story.”

Of course, The House Theater, the UM Theater Department, and Zoetic Stage are all back on board.

Speaking of Partnerships
The Aventura Arts and Cultural Center has worked an arrangement with Slow Burn Theatre Company to bring its shows to Aventura once they close in West Boca Raton.  The Drama Queen broke the story:


In rehearsal for their April 12-21 of Stephen Sondheim's Sweeney Todd (their third Sondheim, after 2010's Assassins and 2012's Into the Woods), Fitzwater and Korinko are unveiling their first expansion plans.  Next season, two of their productions will open in West Boca, then play the Aventura Arts & Cultural Center.

The risk-taking Slow Burn hasn't been eligible for South Florida theater's highest honor so far.  That's not because of the quality of the company's work (the region's critics have been and continue to be impressed) but because the founding duo's fiscally conservative strategy means their shows don't run long enough to be given consideration. With the additional Aventura performances, that may change, at least for Next to Normal and Chess.

Florida Theater On Stage weighed in on the announcement:


Slow Burn’s founders have been very careful during its three seasons not to overextend itself financially, especially in scheduling only two weekends to ensure  that ticket sales could support the run... So to extend the run to another county for a third weekend is a major step in its growth.

One encouraging sign of Slow Burn’s success is that the size of its audiences in the cavernous theater inside a high school has steadily grown show after show due to rapturous reviews and word of mouth about the quality of the work.

Dramaworks Comes Through
The Shiny Sheet reports that Palm Beach Dramaworks managed to raise $18,000 for The Actors' Fund during Dramaworks' run of A Raisin In The Sun, racking up another noteworthy accomplishment for the company:


Broadway shows and tours routinely add a performance to their runs to benefit the fund. But Dramaworks is the first regional theater to mount a sustained drive. Producing Artistic Director William Hayes and Managing Director Sue Ellen Beryl signed on as national ambassadors to spread the word about the organization’s services and raise money.

Speaking of Dramaworks...
Florida Theater On Stage reports that they've announced their next season.  Among the offerings: The Lion In Winter.

While the last regional production was at Caldwell in 2007, the play was staged on the Dramaworks' site in 1981.  The Stage Company production was directed by Joe Conaway, and starred David Holliday, Ruth Clark-Everitt, David Haller, Tom Nowicki, Rob Ferguson, Carol Clark, and Mitch Danilo Susnar.

The Stars Came Out
BroadwayWorld notes that Lin-Manuel Miranda, creator of In The Heights, was due to see the show this weekend at Actors' Playhouse.  But they missed the fact the cast of The Glades came out; Matt Passmore, Carlos Gomez, Michelle Hurd, and guest star Corbin Bernsen were there, as was Judge Marilyn Milian of The People's Court.


It's no mystery to us why the TV folk were there; The Glades employs a larger number of South Florida actors, some of whom were in In The Heights. It's only natural to see what your co-workers are up to. Oh, and it was an excellent production.  We know that cast members of Burn Notice also show up at local theaters from time to time.

So see a play, and you may see a star.  We're getting to be that kind of a theatre scene.

Speaking of Judges
While Judge Milian is a judge who plays a judge on TV, The Miami Herald tells us about a Judge who performs in musicals on the stage.  You missed his honor William Altfield in Miami Acting Company's Man of La Mancha, but keep an eye out; he'll be back on the boards again.

Not Dead Yet
Florida Theater On Stage reports that the American Theater Critics Association honored some plays over the weekend.


Hirschman said this year’s entries validated the future of a vibrant 21st Century theater. “Despite renewed concerns about the prognosis for theater as a relevant and popularly embraced art form, the stunning array and high quality of scripts we read confirmed the enduring commitment of regional theaters and a dazzling diversity of playwrights to be the primary standard-bearers for new works,” he said. “Far from disconnected and elitist, the plays reflected themes and settings ranging from the economic challenges faced by real people in this country to the moral questions created by American involvement on the world stage.”

So it looks like theater will be with us awhile longer.  Whew.
Posted by C.L.J.