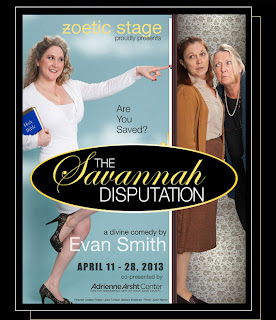 .Zoetic Stage opened its production of Evan Smith's The Savannah Disputation at the Adrienne Arsht Center for the Performing Arts on April 11, 2013.


The Savannah Disputation is a heaven-sent comedy drenched in southern charm, infused with a pinch of hellfire and a dollop of damnation. Two daffy Catholic sisters find themselves in a verbal smack down with a door-to-door evangelist in their own home. Crackling with wit and brimming with emotion, what unfolds is an up-to-the-minute comedy about organized religion, faith and morals in the not-so-United States.


That Zoetic succeeds in producing an entertaining evening doesn’t paper over the fact that the script becomes intellectually fuzzy and slowly disintegrates over the last third of the show, ironic since Smith attempts to delve more deeply into issues. Credit the first-rate cast and Meltzer for nimbly and persuasively negotiating Smith’s wild tonal changes from farce to domestic strife to pathos and back again that would otherwise seem like at least two if not three different plays.

The headline here should be Forgey... Many of her characterizations are similar – a slightly daffy, not terribly sophisticated, but undeniably earnest young woman. But within what she is being cast in, she is honing her comic timing to a keen edge. Further, Forgey somehow manages to keep Melissa from being completely obnoxious despite her genial arrogance.

Whatever the female equivalent of dean is, Bradshaw is the undisputed dean-ess of South Florida actresses. So it goes without saying that she adds another well-executed portrait to her gallery. She, more than anyone, is battling Smith’s cartoonish characterization... The few times that Smith gives her some meat, Bradshaw makes the most of it.

Turnbull long ago proved herself one of the region’s finest actresses. But Smith has only given her two colors to play with – timidity and drabness – and neither she nor Meltzer has gone much beyond that.

Felix gives the most nuanced performance because his character is so level-headed and even-tempered despite Melissa’s outrageous declarations and Mary’s egging on.

This all take place in Jodi Dellaventura’s note-perfect set... Dellaventura has made an enviable reputation working for several smaller theaters in the region... Like her work on Brothers Beckett at the Arsht this spring, this design reaffirms her as a talent to be encouraged.

Mention is also due Luke Klingberg’s subtle lighting shifts and Alberto Arroyo’s dead on costuming. A special nod is needed for Meltzer’s sound design... he has what must be an encyclopedic Ipod of offbeat but perfectly
appropriate music to accompany scene changes for all of his shows.


...the acting, direction and production values are all of the high quality
that helped Zoetic win a trio of Carbonell Awards earlier this month
(though a couple of the performers distractingly botched character names
on opening night). But the play itself could use a dramaturg, a rewrite
or both.

What makes The Savannah Disputation watchable for its two-hour, intermission-free running time are unexpected bits of wit (Meltzer, doubling as sound designer, gives us a country version of the Rolling Stones’ Sympathy for the Devil), the lived-in and just-right look of set designer Jodi Dellaventura’s version of the sisters’ home, and (those blown names notwithstanding) the actors’ strong work.

Bradshaw gets the juiciest role, playing the domineering and mean-spirited Mary for laughs until it’s time to burrow down to the reasons for her behavior, which the actress does with moving power. Though Turnbull is stuck in a part with less potential, she burnishes mousy Margaret with subtle comic touches as she communicates unwavering sweetness and loyalty. Felix gets to display Father Murphy’s laid-back, intellectual and judgmental qualities, and he navigates all of them convincingly. Forgey plays Melissa as earnest but flawed, a luminous gal whose Jesus-loves-you platitudes eventually give way to her ugly hellfire take on Catholicism.


...Evan Smith's The Savannah Disputation is a holy war in microcosm - an acerbic verbal brawl on a single suburban property, currently receiving an exceptional production from Zoetic Stage at the Arsht Center.

Director Stuart Meltzer cast a complex and perfectly believable foursome; nobody's a rube, they're all admirable in one way or another, and they become harder to pigeonhole as the play progresses.

Bradshaw brings a righteous ferocity to her Mary... It's a domineering, scenery-chewing part, but I'd be happy to see Bradshaw digest an entire set.

Turnbull's monochrome Margaret is something else entirely, in a wholly different role than anything I've ever seen from her. She slavishly trudges through the house with the stooped posture of a battered wife, burying her emotions in a contained, sad performance of calibrated poise. It's difficult to remain compelling while invisibly bleeding into the background, but Turnbull accomplishes this in her heartbreaking words and movements.

But the fact is, this is Lindsey Forgey's moment. Stealing a show from Bradshaw and Turnbull is akin to stealing gold from Fort Knox, but Forgey.. pulls it off in a genuine star-making turn... Smith's words never sound funnier than when Forgey is speaking them.

Meltzer, a gifted director of comedies, contributes some wry and funny choices to break up the inherent talkiness of Smith's intermission-free, somewhat static material.

Zoetic Stage presents its production of Evan Smith's The Savannah Disputation at the Arsht Center through April 18, 2013.
Posted by C.L.J.