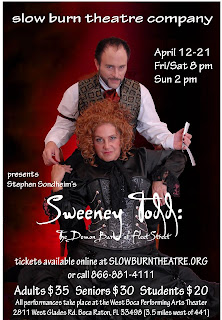 The rare instance of a musical thriller, Stephen Sondheim and Hugh Wheeler’s chilling, suspenseful, heart-pounding masterpiece of murderous barber-ism and culinary crime tells the infamous tale of the unjustly exiled barber who returns to 19th century London seeking revenge against the lecherous judge who framed him and ravaged his young wife. His thirst for blood soon expands to include his unfortunate customers, and the resourceful proprietress of the pie shop downstairs soon has the people of London lining up in droves with her mysterious new meat pie recipe!


It was probably inevitable that Slow Burn’s resident director-choreographer Patrick Fitzwater would produce Sweeney Todd, and he delivers it with all of the show’s full-throttle intensity, even if it is arguably the most mainstream musical from the non-union, low-budget, but wildly talented troupe.

He did not have to go far to find his Sweeney, the unjustly convicted barber who returns to London after serving time in Australia, obsessed with revenge against the crooked, lecherous Judge Turpin. Here he is played by co-artistic director Matthew Korinko, a strong brooding presence in good, deep voice, giving his best Slow Burn performance yet.

The entire score ― and Slow Burn performs the entire score, including a couple of numbers often excised for time or taste ― is rendered deftly by conductor-keyboardist Manny Schvartzman and his six-man band.

The Broadway Sweeney Todd and all subsequent productions had minimal choreography, but Fitzwater has found ways to inject a bit more into the show with the music hall ensemble. Without shortchanging the show’s macabre aspects, this is an audience-friendly take on the material, and one more reason why you really need to head to far west Boca and get to know Slow Burn Theatre Company

So much is right about Slow Burn Theatre Company’s scaling of that Everest of musical theater, Sweeney Todd, that there’s no shame to acknowledge that it’s a competent not a transporting production.

So many aspects of Slow Burn’s rendition work so well under the leadership of director Patrick Fitzwater that it’s difficult to pinpoint where it falls short. It’s missing the ambiance of a corrupt dog-eat-dog society perverted by a menacing evil. Almost everyone on stage lacks that deeply-buried dementia that makes you fear that blood could be shed at any moment. There is a sense of rage – certainly in Matthew Korinko’s Sweeney – but no sense that he or anyone else might suddenly come unhinged to snap the neck of a songbird or slit your throat.

That said, celebrate virtues like the freshness that Korinko and Karen Chandler’s Mrs. Lovett bring to the glorious English music hall pun-fest “A Little Priest.” Working with Fitzwater, they sidestep earlier incarnations of this waltz of Brechtian pragmatism and therefore make it a real scene of musical theater...

Or savor Korinko and Shawn Wayne King as the venal judge singing a soaring duet literally on the razor’s edge of bloody murder in “Pretty Women.”

Or enjoy how Fitzwater has deftly infused choreography (for the first time we’ve ever seen) in appropriate places such as a busker-inspired outburst among the customers in the second-act opener “God, That’s Good.”

And be grateful that Slow Burn has once again cast a cadre of darn good non-Equity singers and band musicians who do justice most of the time to Sondheim’s log flume ride of changes in tempi, meter, keys and his brilliant but sadistically difficult lyrics, thanks to the musical direction of Manny Schvartzman.

... for a show that’s being mounted literally 50 times around the world over the next four months, Sweeney is almost never done in South Florida. It may have been done by Florida Atlantic University and Pembroke Pines Theater of the Performing Arts, but that’s about it. So honor Slow Burn, who also did Sondheim’s Assassins, for resurrecting Sweeney from his grave with passion and commitment.

Since its birth with Bat Boy in 2010, Slow Burn Theatre has been quick to embrace some of musical theater’s most challenging works. Its second show, for instance, was Stephen Sondheim’s Assassins, and in 2012 the company returned to Sondheim’s influential body of work for a production of Into the Woods. But those two were mere warm-ups for Slow Burn’s new production of Sweeney Todd.

A strong actor with a supple baritone voice, Korinko often plays leads in Slow Burn shows, but that’s not favoritism at work — it’s talent. More than once, Korinko has been the standard-setter in Slow Burn productions, and so it is with Sweeney Todd. The actor plays the mad, tragic, vengeful barber with a mixture of fury and, when needed, a forced charm to disarm his soon-to-be victims. The way he lays out the reason for his character’s descent into madness, singing The Barber and His Wife, is haunting.

As Sweeney’s landlady, cohort and would-be Mrs., Karen Chandler doesn’t rise to Korinko’s level. She gets the crazy-funny part — after all, it’s Mrs. Lovett who dreams up the utilitarian idea of using Sweeney’s victims as filling for her substandard meat pies — but her voice is somewhat strident, except when she’s crooning Not While I’m Around to her slow but dangerous young helper...

...Vandepas has trouble with that difficult vocal leap at the beginning of Johanna, but he plays the smitten suitor well, and Antolino is a persuasive damsel in distress.

All told, Sweeney Todd, which runs just one more weekend, is another impressive effort from Slow Burn.

Editor's note:
We were sent a link to a psuedo-review in the South Florida Gay News, but determined that it was too amateurish an effort to include in our round-up.  Polling the audience is no way to structure a proper review; we expect the critic to use their own standards, not those of random people standing around them.Write the review, and let the random people comment on it.