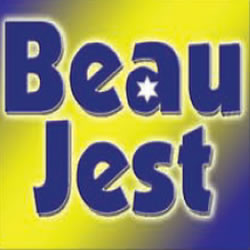 . The Stage Door Theater opened its production of Beau Jest on April 5, 2013.

When Sarah Goldman, a lovely young school teacher in Chicago, wants to please her parents, she invents a boyfriend whom she believes will be the man of her mother's dreams.

When her parents insist on meeting the man, Sarah hires Bob, an actor, to pretend to be her "beau". The masquerade works flawlessly for a time and brings comic situations, but in the end, their lives are irrevocably changed.

... Beau Jest simply resonates in South Florida. So reviving it — particularly if the revival works as well as the Michael Leeds-directed one at Stage Door — makes sense.

Chizever does most of the comedic heavy lifting as Bob, an actor who gained most of his insights into Judaism from being in productions of Fiddler on the Roof and Cabaret.. His Bob is always one blown line away from wrecking Sarah’s fiction, so Chizever makes the actor energized, nervous and very funny.

Fetgatter is a sweet and pretty Sarah... Bondi and Bramble are saddled with stereotypical characters... but the actors bring plenty of warmth to the senior Goldmans. Both Lawrence and Levy are effective in their far smaller roles.

Director Leeds keeps the comedy breezy and affectionate. Characters come into conflict, get hurt and come out the other side OK. Beau Jest is neither deep nor great, but Leeds and his cast explore and deliver its modest pleasures.

Beau Jest has been around so long that... The uber-Jewish farce may have been the first show Ponce de Leon saw on his first visit to these shores at the Fountain Dinner Theater.


But there’s a reason, as seen in Broward Stage Door’s revival.  Despite a sentimental mechanical finale and humor so vaudevillian you can hear the rim shots, James Sherman’s may be script may be formulaic but it’s also truly funny, especially when enhanced by the skills of star Matthew William Chizever and director Michael Leeds.


Chizever, who nailed his dramatic roles last season in GableStage’s Venus In Fur and Naked Stage’s The Turn of the Screw, is emerging as a first-rate light comedian. He hasn’t always scored in some shows, but it’s becoming clear that when he has the right director, he has an easy charm that cloaks a gently subversive wit and a wicked sense of comic timing.

(ed. note - Bill obviously never saw Laffing Matterz when Chizever was a cast member; he was a practiced comic actor before striking out to land the dramatic roles)

The rest of the cast is pretty solid with troupers like Bondi and Bramble knowing exactly how to deliver dialogue so predictable that the audience knows what’s coming. Fetgatter is also a nice addition, investing a lovably hapless anxiety to the gatherings that seem to teeter on the brink of disaster.


But the real star is Leeds who keeps the farcical proceedings humming without seeming forced or rushed... He invents or allows his cast to inject scores of clever grace notes.