Island City Stage: Have I Got A Girl For You (reviews) 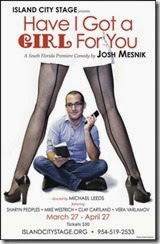 The Carbonell Award winning  Island City Stage opened its production of Have I Got A Girl For You on March 27, 2014.

How does a newly sober, gay musical theatre actor get his life back on track?  By running the largest female escort agency on the East Coast!  Have I Got A Girl For You tells the hilarious true story of Josh, the newest member of the oldest profession.

After a sold out run and extenstion in the New York International Fringe Festival, as well as winning the coveted TheatreMania Audience Favorite Award out of 189 shows, this comedy is making its world premiere right where the true story happened.

Island City Stage may be a relative newcomer on the South Florida theater scene, but the artists at a company that isn’t quite two years old know what they’re doing.

Josh Mesnik’s Have I Got a Girl for You is as riotously funny as The Timekeepers was moving and serious. Star Mike Westrich, director Michael Leeds and sound designer David Hart were involved in both, but their work on each bears no resemblance, except for its high quality.

Mesnik’s writing is sharp, funny and loaded with musical theater references that provide an extra layer of laughs for those who know the genre.

Leeds keeps the pace flying through 90 intermission-free minutes, which means quite a workout for Groom (who plays all the working girls) and Larry Buzzeo (he portrays the johns and Gina’s cheated-on hubby). Both actors use Peter A. Lovello’s costumes, different accents and changes in their physicality to create an amusing array of characters.

The tall, curvy Peoples, dressed by Lovello in a kind of trashy-chic style, makes Gina the sort of egocentric comic monster who happily crushes the weak. Westrich’s Josh, however, is anything but weak.

The actor nails the character’s withering wit, take-charge calmness and engaging charm. It’s an irresistibly juicy role, one that Mesnik originated in the play’s only previous production at the New York International Fringe Festival. Under Leeds’ direction, Westrich makes a man with a unique post-rehab story thoroughly appealing.

“Have I Got a Girl for You,” currently playing at Island City Stage, is simply one of the funniest shows I’ve seen in years.

Under Michael Leed’s fast-paced direction, the one-liners and witty repartee hit the audience like well-placed gut punches, eliciting endless cackles and screams throughout. One woman was brought to tears on opening night.

Mike Westrich is likeable as Josh and Sharyn Peoples is a hot mess as the manic madam, but Christina Groom and Larry Buzzeo steal the show playing a range of wacky whores and the jerky johns. Some of the funniest moments come as Groom is forced to instantly transform from one girl to the next.

Mike Westrich plays Josh and if you’ve seen any of Westrich’s work in the last couple of years you know he’s got the magic touch. He’s a fast, funny and endearing schemer you shouldn’t trust with your grandma if you don’t want her on the streets at night.

Josh works for Gina, the agency owner, the blow-you-off-the-stage Sharyn Peoples. She’s big, brassy and delivers a line like she’s biting the heads off chickens.

Christina Groom plays hookers perfectly and that’s better than it sounds: Nine different obtainable girls in all stages of undress and wiggery and with the facility to switch from innocent to whore in a broken heart beat.

A great comic touch from Buzzeo wraps up an ensemble that had the house locked in laughter for the ninety minute one act.

Big cheers for director Michael Leeds. Have I Got a Girl For You rockets along, not a missed beat in the stream of gags, visual and verbal, making this a memorably satisfying and fun evening.

Larry Buzzeo, who has performed for 20 years, was featured in four plays reviewed in this newspaper, and Mike Westrich appeared in another one, The Timekeepers.  These excellent male actors are joined in the play by two talented ladies of the stage, Christina Groom and Sharyn Peoples.

Two of the actors, Buzzeo and Groom, are called upon to portray a variety of characters… Both actors rise to the demanding challenges required to display a cast of characters with different accents (including Russian and French) and mannerisms. Buzzeo delivered a show-stopping performance as a guy reliving a wild sexual encounter with a prostitute.

Fresh from a bundle of wins at the Carbonnell Awards a few days ago, Island City Stage has another winner on its hands with this production.

Rod Stafford Hagwood wrote for  was sent by The Stunned-Senseless:

The show is a real audience-pleaser, super smart with humor laced with venom. And the quick-change/persona-morphing is virtuoso-level stuff. The story is based on the real-life experiences of Palm Aire-based playwright Josh Mesnik. It’s directed here with focus and discipline by Michael Leeds.

The Island City Stage production of Have I Got A Girl For You runs through April 21, 2014.