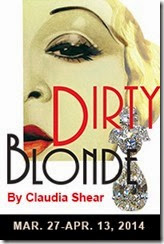 The Plaza Theatre opened its production of Dirty Blonde on March 27, 2014.

A funny, bawdy hit in New York that combines transformations and drama with a fabulous dollop of show biz magic. Dirty Blonde is a multi-layered study of the nature of stardom, as experienced by one of its avatars and two adoring fans. Dirty Blonde finds the enduring substance in the smoke and mirrors of one actress’s stardom, allowing Mae West to shock and delight once again.

…Claudia Shear’s 2000 play Dirty Blonde about provocateur Mae West and her fans sees celebrity as a more complex symbiosis. It traps a star as much as it rewards her, and yet their manufactured personas can still inspire adoring acolytes to change their own lives.

The Plaza Theatre’s production is similarly a conundrum of contradiction – the cast delivers appealing performances, but the play never captures the sex symbol’s blissful bawdiness and nova-like life-force that has invigorated other editions.

The effort led by director Beverly Blanchette isn’t poorly executed, but the vicarious thrill of being in the presence of a truly uninhibited, nose-thumbing iconoclast is simply missing.

This is strange since the dual role of Mae West and one of her present day fans are portrayed by the wonderful Margot Moreland who, indeed, played the role to critical and popular acclaim in GableStage’s production in 2003. And she is ably supported by Ken Clement as another West fan (among other roles) and Terry M. Cain in a gallery of parts such as West’s jettisoned husband.

Still, Moreland deftly slips on West like a second skin without trying to do a drag show impersonation. She wriggles and coos and dances and sings a few songs. One strength of her performance is that her Mae West always comes across as a real person, even when Mae West is portraying “Mae West.”

You’ve got to pay attention to this play; Shear doesn’t write the obvious and the piece doesn’t really jump off the stage at first sight, but if you do follow all the time shifts and character changes you’re going to see some mighty fine performances from Margot Moreland, Ken Clement and Terry M. Cain.

Moreland has Mae West cold; she’s red hot and steaming with sex. She looks like her, moves like her and sounds and sings like her so frankly there’s much more to like when she and Clement and Cain are playing the bio bits. There are five song and dance numbers and I’d have loved to see more.

Dirty Blonde plays at The Plaza Theatre through April 13, 2014.