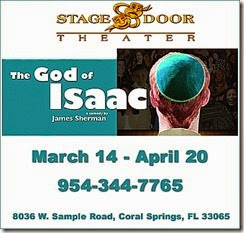 The Broward Stage Door Theater Company opened its production of God of Isaac on March 14, 2014.

"The God of Isaac" is at turns entertaining, hilarious, and ultimately thought-provoking. The comedy concerns the identity crisis of Isaac Adams, a young Jewish man attempting to find out what it means to be a Jew. From the author of "Beau Jest", the play deftly addresses issues of faith, commitment, and truth.
It is the longest running play in the history of Chicago's Victory Gardens, one of the most respected theatres in the country.

…Isaac offers wry lampoons of pop culture to rib Judaism such as the backseat scene in the film of On The Waterfront in which the Brando character bemoans not pursuing his bar mitzvah: “I could have been a mensch instead of a goy, which is what I am.“ None of them are especially meaningful, but all are droll like an early Saturday Night Live skit.

The final lesson for Isaac is not especially shattering: Each person finds their own definition of being a Jew, and the object of life may be the questioning itself and the journey, not the arrival in the Promised Land…

Much of this works because director Dan Kelley, best known for outright comedies, has found Sherman’s difficult meld of humor and poignancy.

Kelley’s casting is especially solid, mostly newcomers to South Florida theater. Patrick A. Wilkinson plays Isaac with a stand-up comic’s attitude, a kind of Seinfeld vibe, but it doesn’t quite hide Isaac’s growing anxiety as the search takes over his life, even driving a wedge in his marriage. He exudes an energy and amiability that wins over the audience instantly and drives the play forward… He’s well-supported by Stage Door veteran Phyllis Spear as Isaac’s mother who sits in the audience, kvetching and kibitzing through her son’s play.

The God of Isaac intentionally indulges almost every cliché and meme of modern American Judaism, but Stage Door’s mounting delivers a production that also manages be thoughtful while entertaining.

Wilkinson acts as both narrator and performer, focusing the audience’s attention on the story while guiding them through the religious dearth that has muddied his life to date. It is a confident performance that rarely strays from the subject, even as Isaac deals with a series of interruptions from his meddlesome but loving mother, portrayed with much maternal panache by Phyllis Spear, who is sitting in the front row with the audience.

Among cast members, Spear is a seasoned pro who can deliver the goods from the stage or audience. Bengston, Diaz, Mohrbacher and Vandepas are top-drawer, well suited to their many roles.

Director Dan Kelley does yeoman duty keeping the action from spilling too far off the stage… The play is wonderfully entertaining, though a few segments are a bit sad. Overall, though, it’s a howl.

You sit there, enjoying the heck out of a breezy production of “The God of Isaac,” but wondering when the pot will boil.  That’s the neat thing about this production at Coral Springs’ Broward Stage Door Theatre: it’s a quick-witted and clever comedy that puts its seriousness on such a slow, but steady, burn that you’re unaware of exactly when you began to feel the prickly heat.

It must help having such a strong script from James Sherman (“Beau Jest”) and such comedic-timing proficient direction from Dan Kelley.

God of Isaac plays at The Broward Stage Door Theater through April 20, 2014.