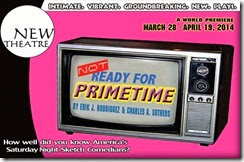 New Theatre opened its production of Not Ready for Prime Time on March 28, 2014.

Fall down this comedic "Sex, Drugs, and Rock 'n Roll" anthemed rabbit's hole, back to the first five tumultuous years of America's funniest and most popular TV show - Saturday Night Live. Penned by the young and sexy local playwrighting team of Charles A. Sothers and Erik J. Rodriguez. Not Ready for Primetime bites into the twisted off-stage personalities, the steamy love affairs, the fights that fueled the Emmy Award-winning, funniest, and most dysfunctional late-night ensemble of Newman, Belushi, Curtin, Radner, Aykroyd, Murray, Morris, Chase and their ringmaster, creator Lorne Michaels.

New Theatre’s debut of the new, locally written work, Not Ready for Prime Time, has a way to go before it is actually ready for prime time. Kudos, however, to this theater company who has built a reputation on embracing new plays and playwrights. With a few more tweaks and an injection of depth, Not Ready for Prime Time could be a hit that has legs beyond South Florida.

The play, written by Erik J. Rodriguez, a student at Florida International University, and Charles A. Sothers, who has appeared as an actor at New Theatre, and debuts his first play, was embraced by New Theatre’s talented artistic director Ricky J. Martinez, who also directed Not Ready for Prime Time.  Martinez’s hand is evident in how the show moves in and out of the lives of the players, and to the on-stage dichotomy of the comedy troupe and their producer writing and starring in the demanding on-stage sketch comedy of SNL.

What’s missing from Not Ready lies in the writing — that three-dimensional, behind–the-scenes bio grit that this attempt calls for, but is lacking. The characters conjured by Rodriguez and Sothers never really feel the pain of drug abuse, the real angst of show biz backstabbing, divorce, sex addiction, women’s rights, getting-too-famous-too-fast — they merely talk about it.

The show does have some interesting bells and whistles built in. Michaels’ conveys the story from his P.O.V, however, in the second act, that’s stripped away from him and the cast has their turn to “tell it like it is” — this is a nice device. Studio Monitors Clara Hernandez, Erica Herrera, Christian Benabe, Wykeem and Randy Prophete appear every once in a while holding cardboard placards that signal the audience for “applause” or “ooos,” a nice touch that keeps the live studio audience ambience intact.

The vibe radiating from New Theatre’s Not Ready for Primetime is a spirit of anarchic fun, a scrappy let’s-put-on-a-show aesthetic appropriate for a play about the early days of NBC’s late-night staple Saturday Night Live.

Not Ready for Primetime marks Samson’s stage debut in a full-length play...  As the sometime narrator and a driving character, Samson radiates a presence and confidence undoubtedly accrued from his day job. His speaking voice has a bit of a Michael Douglas timbre to it, and if his Lorne gets mired in repeated instances of ranting then relenting, that’s the writing, not the actor.

Director Ricky J. Martinez helped Rodriguez and Sothers transform their script from a collection of sketches into a full-fledged, behind-the-scenes play about how hungry young performers coped with the sudden fame that the 1975 show brought them. Carefully researched, Primetime explores backstage rivalries, hookups, drug use and, briefly, the frustration of the cast’s women at not getting a bigger piece of the writer-performer pie.

The playwrights and actors do get certain qualities of the originals... But audience members who watched Saturday Night Live in its first five years will have a harder time buying actors who feel like vaguely similar stand-ins for comedy legends.

It is an intriguing look at the Herculean effort it takes to get a live variety show on the air week after week while trying to balance egos, petty jealousies, drug addiction, and the monster that is fame. This ’behind the scenes’ look at what was to become one of the longest running shows in television history does have both its hits and its misses.

With one exception, the production features an incredibly talented cast that has no trouble whatsoever keeping up with the many characters and profound complexities required when portraying recognizable public figures (most of whom are considered comedy legends).

While his is a valiant effort, Samson is not a Thespian, and it shows. His delivery is forced and slow (the other actors seem to be waiting for him to deliver his lines) and his reactions are overly animated, formulaic, and child-like.

The rest of the cast is solid. Zack Myers brings John Belushi to life with both his physicality and the infamous raw emotion of the troubled but brilliant comedian who left us way too soon. Ivan Lopez…does Aykroyd justice; his accent, delivery and subtle comedic intellect are palpable throughout his performance.

Jennifer Jill Lehr bares an eerie resemblance to Radner but her performance does not simply rely on her physical likeness; Lehr perfectly depicts Radner’s legendary characters…

Susie Taylor’s portrayal of Laraine Newman… is riveting and real in every sense of the term. Melissa Ann Hubicsak plays the much more practical Jane Curtin. Hubicsak had the least challenging of the roles, but she does bring an authenticity to Curtin that does not go unnoticed.

Despite the noticeably unpolished script and shaky performance by the main guest actor, it is still worth seeing. Strong performances by the ensemble cast, a little levity, and a little heartache, with a heavy dose of nostalgia, all somehow come together to form a relatively entertaining evening of theatre.

The New Theatre production of Not Ready for Prime Time plays through April 19, 2014.