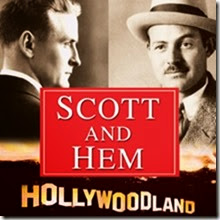 Actors’ Playhouse opened its production of Mark St. Germain’s Scott and Hem and the Miracle Theater on May 14, 2014.

F. Scott Fitzgerald and Ernest Hemingway wrestle with the sparks of art and the perils of creativity - and the personal destruction they can reap - in this combative new play set amidst Hollywood's glittery backdrop. Fueled by friendship and rivalry, two literary heavyweights reunite in 1937 for a final night at the Los Angeles resort villa, the Garden of Allah. This smart and powerful new drama by Mark St. Germain explores the cost of love and friendship, along with the personal and professional price of being a writer.

A talented cast and director struggle to make the play at Actors Playhouse land solidly, and sometimes they succeed in this fictionalized encounter between writers trying to help and/or sabotage each other at low points in their careers.

But the actors cannot triumph for long when St. Germain keeps ripping loose every 25 seconds with some clumsily manufactured allusion like, “Hey, you remember the time we all got blotto in Paris and you screwed Picasso’s wife while Zelda played the trumpet and Faulkner had a three-way with Harpo Marx and a matador which is why Zelda’s now locked in an asylum and Stein is spreading gossip that I’m a homosexual.”

I’m only exaggerating a little..

As good as the cast is – Tom Wahl and Gregg Weiner are among the best actors in the region – it would take Ian McKellen and Judi Dench to make this dialogue sound natural.

Wahl makes a believably urbane but haunted Fitzgerald and Weiner is equally persuasive as the blunt, hard-living Hemingway. They embrace the admiration and jealousy each character feels toward the other. Jennifer Christa Palmer is an intelligent, no-nonsense assistant to MGM’s chief who is tasked with babysitting Fitzgerald and trying to keep him sober enough to finish the assignment.

In bringing the play to life, director David Arisco has cast a pair of impressive Carbonell Award-winning actors as the literary giants.

Wahl, sporting Fitzgerald-styled hair and a smoking jacket (the artful costumes are by Ellis Tillman, the wigs by Gerard Kelly), is handsome and patrician, believable as the Jazz Age great who gave the world The Great Gatsby, Tender Is the Night and so much more. Weiner’s Hemingway is crude, lascivious toward Eve and, underneath his cocky veneer, awash in the depression that would eventually lead to his tragic suicide. Palmer’s Eve is a type, a smart gal trying to keep Fitzgerald and her own career from derailing. But the play’s juice comes from the back-and-forth of Wahl and Weiner.

Scott and Hem features a handsome period set by Gene Seyffer and Mitch Furman, and lighting design by Luke Klingberg that ranges from a mood-setting sunset to a jarring wash of green as Hemingway exits reciting words from The Great Gatsby. The play itself is a minor look at major figures, but Wahl and Weiner keep the clash of two troubled titans intriguing.

If you’re of that certain age where you can recall the 1930s and you’re of that certain bent where you read the novelists of the time, and I don’t mean as a high school assignment, you’re going to enjoy the hell out of Scott and Hem now playing at Actors’ Playhouse. And of course, if you’re a little young for the ’30s, ’40s, ’50s, and even ’60s, but you can appreciate good theatre, you’re going to enjoy the hell out of it too. It’s that kind of show…

This is all great fun and fascinating to watch and director David Arisco made it doubly so by casting Tom Wahl as Scott Fitzgerald and Gregg Weiner as Hemingway. These two play off each other in grand fashion, Wahl as the slim, almost effete chronicler of the wealthy and Weiner as the burly, heavy drinking all he-man ("my mother sent me the gun my father used to kill himself").

The Actors’ Playhouse production of Mark St. Germain’s Scott and Hem plays at the Miracle Theater through June 8, 2014.