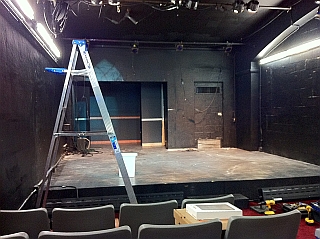 Today’s dark theater is Barry Univerity’s Pelican Theater, the home of The Naked Stage.  It’s a tiny little afterthought tucked away in a corner of the campus, but TNS always manages to give flight to your imagination so you don’t notice the cramped quarters.  Or, they so tailor the production that you can’t imagine it being done in a larger hall.  Either way, it’s a gift.


The Naked Stage is now in rehearsals for August Strindberg’s Miss Julie, which will open May 23, 2014.  We can’t wait to see what they’ll come up with this time, but we’re sure it will be ingenious.

James Roos was a classical music critic, but an excerpt from his memoire published in Thursday’s Miami Herald illustrates the role a critic is supposed to fill in the arts community.

Florida Theater On Stage reports that Kim Ehly’s Baby Girl will be performed at this year’s New York Fringe Festival.


The world premiere directed by Ehly was the inaugural offering of her troupe Kutumba Theatre Company in July 2012. Word of mouth from audiences in the tiny Empire Theater in Fort Lauderdale was so overwhelming that performances often sold out and the work received a Carbonell nomination for best new work.

Arts for the Future

Got kids?  Got kids who like to do plays?  The Sun-Sentinel has a comprehensive list of theatre summer camps across South Florida for your perusal.

A Boost in a Rough Economy

It’s no surprise that people attend theatre because they enjoy it, but The Stage finds a study that says that it feels better than you might have thought.


People who attend plays have a level of wellbeing equivalent to the amount of happiness derived from a £1,000 annual income increase, new research on the social impacts of culture has found.

But it won’t help you pay off your mortgage or credit card debt.  Dammit.

A Gathering of Playwrights

Florida Theater On Stage fills us in on CityWrights, a weekend of workshops for playwrights hosted by City Theatre in June.


Now in its fourth year, CityWrights Professional Weekend for Playwrights gives writers a unique opportunity to meet, take workshops from and connect with a variety of creative professionals, from playwrights and publishers to agents and directors, said Susan Westfall, City Theatre’s co-founder and literary director.

It Ain’t The Blues

Broadway World reports that Blue Man Group will be playing The Adrienne Arsht Center this week.

The Dreams of Space

The Minnesota Playlist notes the passing of an abandoned movie theatre into the hands of a developer, and ruminates on the many theatre companies looking for homes but failing to revive existing spaces.  It’s certainly a familiar story here, as we watch The Coconut Grove Playhouse wander in and out of the news while the Hollywood Playhouse just sits and rots, all but forgotten.  And The Royal Poinciana Playhouse?  Haven’t heard a thing since it was announced that a lease was issued.
So why do they molder away?  Because maintaining and running them costs more than most people realize.  Like the Grove; there’s a small bunch of radicals who want to use the $20 million held in escrow to fix the existing structure and start it running as a theater again.  But the fact is that because the structure is so bad, $20 million isn’t anywhere near enough to fix the building to the point of occupancy, let alone outfit it as a contemporary theater.
Posted by C.L.J.