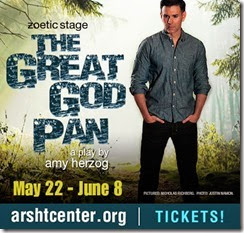 Zoetic Stage opened its production of Amy Herzog’s The Great God Pan at the Adrienne Arsht Center for the Performing Arts on May 22, 2014.

Jamie's life in Brooklyn seems just fine: a beautiful girlfriend, a budding journalism career, and parents who live just far enough away. But when a possible childhood trauma comes to light, lives are thrown into a tailspin. Unsettling and deeply compassionate, The Great God Pan tells the intimate tale of what is lost and won when a hidden truth is revealed to the world.

The unalloyed success of this production can be traced to the sensitive, subtle performances and Stuart Meltzer’s carefully-paced direction that helps the actors excavate deeply into their characters’ angst.

This is a quiet play in which the characters are not especially conscious that a toxic river flows under the surface that they have submerged for decades and then they fight off acknowledging it for most of the show.

No one succeeds with this as well as Richberg, fresh off Zoetic productions of Assassins and All New People and GableStage’s Cock. He starts out so normal, so recognizable as the guy in the next cubicle. He and Meltzer calibrate in millimeters the insidious progress of the poison, making his transformation totally credible.

Most of the rest of the cast is on the same level. You don’t realize just how good Stabile is until you remember his completely different personas in The Timekeepers, The Last Schwartz and The Beebo Brinker Chronicles. But if you’re an acting student, study Bradshaw and Radosh who find tiny inflections that bring a verisimilitude to their characters.

The uniform quality of these performances likely reflect on Meltzer’s guiding hand. It’s his pacing that is remarkable and his forcing the actors to dig deep into the characters’ complex psyches, requiring that the actors have a clear understanding of how every uncompleted sentence would have ended.

His physical staging of the first show in the round for Zoetic is flawless.

Amy Herzog is one of the country’s hot young playwrights, a Pulitzer Prize finalist whose plays 4000 Miles and After the Revolution have already been produced in South Florida.

That’s half of her small body of work. Now Zoetic Stage is closing out its season at the Adrienne Arsht Center’s Carnival Studio Theater with an intense, exquisite production of a third Herzog play, The Great God Pan.

Director Stuart Meltzer gives the play a spare but powerful Brechtian staging, having the “offstage” actors stay on the sidelines to watch the in-the-round action along with the audience.

…to a man and woman, the cast delivers thoroughly engrossing performances, finely calibrated and rich with detail. Herzog’s play doesn’t neatly answer each question it raises. But it rivets the audience, thanks not just to provocative writing but to Zoetic’s exemplary production.

…for eighty minutes we watch an excellent Nicholas Richberg torture himself over whether or not he was abused. Twenty-seven years previously. The urge to scream: get over it, if it happened it’s gone, get on with your life. Don’t be so damned selfish.

These are good actors working here, but the characters are drawn sparsely. Having the actors sit on benches around the playing area heightens the effect of the scenes being presented by rote. (The cellist plays during the scene changes.)

It’s an impressively simple set by Jodi Dellaventura. In the round with a forest glade centered. Bird noises abound. A creek chuckles off stage. The floor is covered with wood chips and four tree stumps, one in each corner delineate the playing area.

…The Great God Pan is about the unreliability of memory and the emotional cost — or potential gain — of exploring its darker recesses. Enjoying a pleasingly abstract if not fully connecting production from Zoetic Stage, it's a difficult piece with more moving parts than it initially seems.

…Meltzer has assembled a superb cast. Radosh brings both observant humor and touching melancholy to Jamie's mother, Cathy, embodying a woman caught adrift by Frank's allegations, which conjure the bleakest time in her life. There is much warmth and vitality in Kwiat, who brings intuition and actorly curiosity to the role of Doug, Jamie's father. Stabile's pain and discomfort in discussing his character's tragic past is palpable, and Richberg is the production's steadfast anchor, delivering a profoundly identifiable, no-frills performance.

The Great God Pan is staged in the round, a first for Zoetic. Jodi Dellaventura's minimalist scenic design consists of amber bulbs dangling from a suspended wooden beam, illuminating a field of wood chips punctuated on four sides by shaved tree trunks, which act as the characters' chairs. A cellist, Aaron Merritt, sits off in a corner, his performances of famous Bach and Benjamin Britten suites adding ­instrumental flavor between scenes. There are no props and very little extroversion in the performances, but the actors step in and out of the field when necessary; in general, it seems Meltzer has smartly integrated more movement than in previous productions of this play.

The  Zoetic Stage production of Amy Herzog’s The Great God Pan plays at the Adrienne Arsht Center for the Performing Arts on June 8, 2014