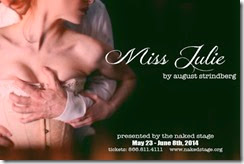 The Naked Stage opened its production of August Strindberg’s Miss Julie at Barry University’s Pelican Theater on May 23, 2014.

The year is 1894. Midsummer night’s celebrations are in full swing, but the Count’s daughter, the beautiful and imperious Miss Julie, feels trapped and alone. Downstairs in the servants kitchen, handsome and rebellious footman, Jean, is feeling restless. When they meet, a passion is ignited that soon spirals out of control. Strindberg’s masterpiece caused a scandal when first produced -- and has been hugely popular ever since -- for its searingly honest portrait of the class system and human sexuality.

For a century, August Strindberg’s tragedy Miss Julie has been interpreted as a seesaw of power exercised through class and sexual politics. But in Naked Stage’s production, as lives lie in ruins, everyone ultimately is revealed a slave, never a master, when they toy with those three elements. Any impression of dominance is self-delusional.

...Naked Stage’s production is a satisfying, intriguing rendition deftly directed by Margaret M. Ledford and acted at full throttle by Matthew William Chizever, Deborah L. Sherman and Katherine Amadeo, the company’s co-founder who has longed to play the title role for some time.

Amadeo succeeds in the seemingly impossible task of making credible the passive-aggressive Julie whose borderline psychosis and extreme mood swings would challenge any actress… Even more difficult – thank you Strindberg — is making plausible how Julie can be imbued with unquestioning knowledge of her superiority as the entitled one percent and then to see her weepily reliant on someone who shines her father’s boots. Somehow Amadeo pulls it off…

Chizever… conquers his similar challenge. Jean has ambitions of reinventing himself as the owner/operator of a hotel in Italy… yet (he) makes completely believable that Jean is in thrall to the class system: genuinely admiring his master, well-versed in the protocols and pitfalls, and perfectly aware how disastrous a liaison with Julie could be.

Sherman has the challenge of Strindberg’s least defined role... But Sherman makes Christine’s single-minded devotion to the order of things the only fully admirable person in the play.

Ledford is one of the region’s best directors – we’ve used that phrase several times before. This show seems a little out of her wheelhouse, but she is more than capable of leading us through the intimate eavesdropping and the serpentine changes.

Directed with exquisite attention to detail by Margaret M. Ledford, Miss Julie reunites Naked Stage artistic director Katherine Amadeo and Matthew William Chizever, last paired in the company’s powerful Turn of the Screw. The two have a fiery dramatic chemistry, one that deepens the impact of the power shifts and sexual gamesmanship inherent in Miss Julie.

Vocally and physically, the commanding Chizever is an imposing presence as Jean squares off against Amadeo’s slender, luminous Miss Julie. Yet the actors and director Ledford keep the sadomasochistic sexual tension crackling

The production values are of a piece with the direction and acting. Antonio Amadeo has designed a gray period kitchen with servant-summoning bells in a high and dominant position (more symbolism). Doing double duty as costume designer, Sherman gives Christine and Miss Julie clothing that underscores class differences, and she dresses Chizever as an elegant gentleman-servant. Doubling as lighting designer, Ledford subtly underscores mood with light and shadow. And Mitch Furman’s sound design, signaling a brewing scandal and the count’s return, sets the stage for tragedy.

Join me, friends, in snapping off a salute to the bravest little theatre in town, Naked Stage. They’ve just opened August Strindberg’s classic Miss Julie, first performed in 1906, that has all the psychoses of the morning-after banter between Doctors Ruth and Phil should they have stopped talking long enough to get it on, intimately.

Katherine Amadeo as Miss Julie brings a raging conviction to the 25-year-old woman dissatisfied with her boring life… Amadeo brings wilfulness to a monstrous height, her downfall all the more harrowing. Chizever, his voice, his sophistication, his guile, brutality, his very self satisfaction and his fear are worth seeing over and over again.

Deborah L. Sherman plays, Christine, the cook, and unfortunately it’s a minor role, for Sherman is a fascinating actress and she makes the most of every moment as Jean’s fiancée.

Margaret M. Ledford’s direction and Naked Stage’s production shoot the piece along so there’s never a need to check one’s watch. Naked Stage overcomes today’s “What me? See a classic? Nah.” So congratulations to them all. Bravery, indeed.

This bracing and urgent production from the Naked Stage proves that Miss Julie is as relevant now as it was more than a century ago.

Amadeo is irrepressible and coquettish, both the architect of her own demise and the play's most tragic victim, while Chizever is a fount of repressed animalism regularly — and convincingly — surprised by his own outbursts. Their chemistry smolders, with director Margaret Ledford eliminating as much space between them as possible and using nocturnal blue lighting to artfully conceal one of the most suggestive onstage sex scenes in recent memory.

Deborah L. Sherman provides eviscerating support as Jean's fiancée Christine, enlivening a secondary part with the nuance of a lead…

Rich enough to benefit from multiple viewings, this is quite simply one of the year's best productions.