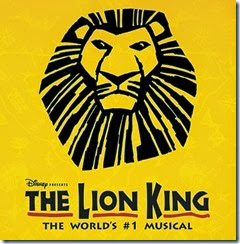 The national tour of Disney’s The Lion King opened at the Broward Center for the Performing Arts on January 7, 2015.

Experience the phenomenon. The most eagerly awaited stage production ever will leap onto the Au-Rene Theatre stage. Visually stunning, technically astounding and with a musical score like none other you've ever heard. Giraffes strut, birds swoop, gazelles leap. The entire savannah comes to life and as the music soars, Pride Rock slowly emerges from the mist.

…as the current Broadway Across America visit of The Lion King to the Broward Center shows (and indeed Beauty and the Beast’s stop at the Arsht Center last month) Disney knows how to keep that magic alive.  The vibe may seem blunted for those hearing “Can You Feel The Love Tonight” on stage for the third or fourth time, but the quality of the material and the indefatigable commitment that the troupe devotes every night keeps this visit to the Pridelands as fresh as it was 18 years ago.

What remains undimmed is the visual and aural banquet – an unparalleled achievement in mainstream theater melding music, voice, dance, movement, costumes, masks, lighting, scenic design, puppetry and several other disciplines into a unified and overwhelming theatrical whole, thanks to Julie Taymor who can be forgiven anything, even Spiderman: Will The Last Person Leaving Please Turn Out The Light…

A dozen other major talents share the honor including Garth Fagan’s choreography, which seems as exhilarating as the first time you saw it, and the score, especially Lebo M’s African-infused contributions. Elton John and Tim Rice’s pop tunes aren’t in the same class, but credit them with that peerless pulsating anthem “The Circle of Life.”

But the sheen that makes it still glow is delivered by this cast, many of whom who have played one or more roles in different companies. Every last one has not just expressive singing chops, but mellifluous and distinct speaking voices — starting with the outstanding performance of Patrick R. Brown’s Scar…

L. Steven Taylor embodies strength and wisdom in a Mustafa who is the kind of father many folks dream of having or having had. His baritone intoning “They Live In You” is deeply stirring. Jordan A. Hall (alternating with Tre Jones) is a bundle of gleaming energy as Young Simba. Jami Remy makes a plausibly callow Simba who grows into his mantle. Tshedi Manye’s Rafiki is a delightful collection of cries, clicks and twitches. Drew Hirshfield’s Zazu, Ben Lipitz’s Pumba and understudy Tony Freeman’s Timon were classic vaudevillians.

Even coming around one more time, The Lion King succeeds as a charming evening of pure storytelling.

Few shows have such a long touring life — or hold up as impressively — as The Lion King. But hold up it does, thanks to the care lavished on it by Disney Theatrical Productions and the often stunning work of its creative team, particularly Julie Taymor.

True to its animated roots, the script by Roger Allers and Irene Mecchi is simple enough to keep kids entertained. But its themes — the circularity of life and inevitable death, ruthless scheming for power, the importance of courage and responsibility — create a Shakespearean undercurrent that makes The Lion King thought-provoking for adults. And the show’s visuals, music and dance are simply dazzling for theatergoers of any age.

The magnetic and amusing Manye, the droll Brown, the commanding Taylor and the funny Lipitz have played their roles on Broadway, and with their fellow actors make for an uncommonly strong touring cast. As young Simba, Hall has charisma and dancing skills to burn, so that you do miss him when the grown-up Remy (who’s a fine singer-dancer-actor) takes his place. The ensemble singers and dancers contribute glorious sounds and movement that conjure Africa.

The Lion King does have some scary moments, and at Friday’s official opening, there were a few wails from upset little ones. But for the vast majority of those who will join the more than 75 million who have seen the show, the best of the Disney stage musicals should prove a captivating, visually sumptuous and thoroughly entertaining experience.

The national tour of Disney’s The Lion King plays at the Broward Center for the Performing Arts through February 1, 2015.