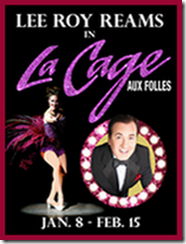 Before there was the popular movie The Birdcage, there was the smash hit Broadway musical, La Cage aux Folles. With music and lyrics by Jerry Herman and an incredibly inspired book by Harvey Fierstein, it tells the story of a flamboyant gay couple who must pretend to be straight for one night – with one of the men in drag – to dupe the conservative political family of their son’s fiancé. Broadway’s Lee Roy Reams stars as “Zaza” in this Tony Award-winning musical that features songs like La Cage aux Folles, I Am What I Am, Song on the Sand and The Best of Times.

The Wick Theatre’s revival of La Cage aux Folles has everything that its last musical, Mame, was missing – beginning with showbiz pizzazz. If its aging leads Lee Roy Reams and Walter Charles are not as powerfully vibrant as some of their predecessors (although they have done the show before), they more than make up for it with a career’s worth of well-honed theatrical chops that will make many audience members choke up or swell with vicarious pride.

The production’s success is owed in no small part to director/choreographer/stager Norb Joerder. As much as he struggled with Mame, this is a welcome return to the razzle dazzle he brought last season to The Wick’s 42nd Street. He still isn’t particularly inventive staging non-musical scenes other than lining people up across the stage. But his dance routines for Les Cagelles were as strong as you see in most regional theaters and an infectious joy to watch.

Joerder elicits from Reams, Charles and the cast all the comedy, poignancy and sentiment in Harvey Fierstein’s well-crafted adaptation of the French film. The lengthy book scenes are so deftly attended to by all involved that they don’t seem like interludes between production numbers and power anthems.

Reams is clearly having a blast as the effusive, tender-hearted Albin/Zaza. Provincial audiences may not know Reams’ name, but Broadway aficionados savor his past as one of the premier tap dancers in such productions as the original 42nd Street and Applause… Reams throws every iota of stagecraft he knows into every moment whether it’s deftly negotiating comic bits in a spoken scene or making up for not being able to hit every note in “I Am What I Am” by speaking lyrics with a stirring passion.

Charles, another Broadway vet, looks like a frail grandfather and, frankly, doesn’t have that zing you expect from a club emcee. But when he opens his mouth, he nails the comic timing of the script and his fine strong singing voice smoothly embraces his musical numbers, especially selling the sincerity of the love song “Song on the Sand.”

Phil Young rightfully get the license to chews up every bit of scenery as the way out there butler/maid Jacob. Aaron Young delivers a credible callow son Jean-Michel. Troy Stanley makes a comically despicable bigot and Angie Radosh nails her fleeting moments as his befuddled wife. Christina Laschuk makes a comely fiancée and Jodie Dixon-Mears is the nose-tweaking, singing restaurateur.

…here we are with the sturdy and handsome production at the Wick Theatre in Boca Raton, which opened the same week that Florida's constitutional ban against same-sex marriage was struck down by the courts.

This staging by director-choreographer Norb Joerder absolutely nails the traditional elements. The catchy and melodic tunes are sung with voltage. The dance numbers blaze the boards. The costumes are spectacular. And the jokes are Borscht Belt badass. At times, they're even great.

If ever there were actors who could pull off this Sisyphean (sorry) feat, it is this group of performers, led by Broadway veterans Lee Roy Reams ("42nd Street," "The Producers") and Walter Charles ("Sweeney Todd," "Anything Goes")…  Reams carries the show like one of the many feather boas he tosses around his shoulders, which is to say casually and flirtatiously. Charles is excellent, singing with palpable passion.

They, along with their supporting cast, put heart into "La Cage" and keep it real and relatable instead of being just another cute curiosity.

For this production, executive producer Marilynn Wick and director Norb Joerder have cast Broadway vets Lee Roy Reams as Albin (Zaza) and Walter Charles as nightclub owner Georges.  At first glance, both stars seem miscast, each easily 25 years too old for their roles…

Reams channels a feisty Harvey Fierstein in his performances as Zaza, even though Fierstein never performed the role. His stage numbers are sung and acted with panache...

Despite his slender frame and careful movements, Charles sings with a powerful baritone, demonstrating the value of talent and experience in an industry that relishes youth. He is at his heart a song-and-dance man from a bygone era, but it works for Georges, especially “Song on the Sand.” Together, Reams and Charles perfectly conjure up the chemistry of the old married couple they portray.

Joerder walks a careful line throughout the production, allowing his cast, especially Phil Young as the butler/maid and the Cagelles, to subtly camp up their performances without getting too ridiculous. There is always some truth in stereotypes, but as LGBT people become more accepted, the camp is not as necessary to disarm homophobic audiences anymore.

…Reams and Charles are the stars, but they are supported by solid performances from Aaron Young (son Jean-Michel) and Christina Laschuk (fiancée Anne). Among the familiar faces in the cast are locals Shane Tanner (Francis) and Angie Radosh (Mme. Dindon).

Resident musical director Michael Ursua capably leads the eight-piece orchestra, live music a wonderful addition in The Wick’s second season. And, of course, the costumes are dazzling, featuring some of the Broadway collection from the The Wick Costume Museum and also very sparkly originals for Reams.