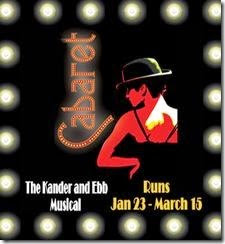 The Broward Stage Door Theatre opened its production of Kander and Ebb’s Cabaret on January 23, 2015.

Set in Berlin’s seedy Kit Kat Klub in 1931, under the ominous presence of the growing National Socialist Party, the show revolves around cabaret performer Sally Bowles, a jaded good-time girl and her relationship with young American writer Cliff Bradshaw.

Cabaret features show-stopping choreography, dazzling costumes, and some of the most iconic songs in musical theatre including Money Makes The World Go Round, Two Ladies, Maybe This Time and the renowned title song.

Broward Stage Door’s courageously adult and resplendently lewd production of Cabaret ain’t your condo grandmother’s musical comedy. The only thing missing from this vision echoing the Sam Mendes revival is the nipple ring.

The unspoken but certain knowledge that she is selling that soul gives the required depth to the characterization delivered so well by Katherine Amadeo. Even at her devil-may-care gayest, Amadeo’s Sally is camouflaging a terror that someday she be unable to evade a truth she will not even allow herself to define… Amadeo is a proven dramatic actress ... So it’s no surprise that she fully inhabits the sybaritic Sally and injects her with the sad pathos of the already compromised. But under the titanium shell Sally has constructed, Amadeo exposes the yearning for something better in her rendition of “Maybe This Time.”

Ronen Bay, a newcomer to Florida, is just as good as the profligately louche Emcee, a dissolute creature damned long ago. His arching eyebrows over piercing eyes are complemented with a sickening leer.

Saddled with the difficult role of Cliff is Pierre Tannous... He exudes enough charisma to make us care about someone who starts off a buttoned-down observer but whose emerging social conscience forces him to care about what is happening around him.

Elissa D. Solomon does a fine job as the pragmatic survivor Fraulein Schneider… Michael H. Small portrays yet another his patented affable uber-mensch as the Jewish grocer Herr Schultz.

For all the effort being expended, the overall production seems noticeably muted, even falling a shade short of what it aims for. Some of this may be that Stage Door is using a pre-recorded digital orchestra. While they could not afford a large enough live band to matter, the immediacy and clarion sound of on-stage musicians usually elevates the electricity further.

Kelley’s take on the show is, like that of revival director Sam Mendes, erotically charged and reflective of Berlin cabaret performers’ lives (onstage and off) as the Nazis rose to power.  One key difference is that the Stage Door cast doesn’t double as the orchestra at the show’s fictional Kit Kat Klub… all the performers sing along to recorded tracks, shutting down any in-the-moment give and take between actors and musicians. Go to any show with live music — Slow Burn Theatre’s Bonnie & Clyde and Ragtime at Actors’ Playhouse are just two currently running — and you’ll feel that difference.

Ronen Bay, flirtaceous and pointedly androgynous, is appealing and in control as the Emcee…

Waif-like and strikingly lovely, Amadeo has a sweet, small voice, one that works best when she’s singing with the Kit Kat gals... Selling her solos on Maybe This Time and the title song is a bigger challenge, but Amadeo paints with all of Sally’s colors in the show’s non-musical scenes. She creates a woman who is sexually voracious, pragmatic, exploitative, self-deluded, impractical and irresistible.

…Pierre Tannous is a riveting presence. The audience sees the decadence and danger of prewar Berlin through his eyes, and he’s convincing in every moment of that journey. Sadly, he sings just part of one song — Perfectly Marvelous, sung with Sally — and Tannous’ terrific voice makes you wish Cliff had more to say musically.

Elissa Solomon and Michael H. Small are appealing as Fräulein Schneider and Herr Schultz, the older couple whose attraction is doomed by the rising Nazi tide…  Katrina Michaels luxuriates in the brazenness of Fräulein Kost, and Ben Prayz finds the balance of charm and menace in Ernst Ludwig.

With feelings of menace and unease so widespread in the world today, with the ugly resurgence of antisemitism, Stage Door’s Cabaret may seem particularly relevant and resonant to many who see it. Yes, it’s a musical, and it’s entertaining. But it endures because it is an insightful piece of art.

Cabaret plays at the Broward Stage Door Theatre through March 15, 2015.