David Goldyn is the first to benefit from the new handling of reviews, since he alerted me to the review in the comments on another post. 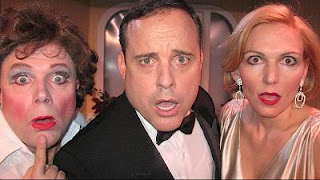 The first review up for Roll with the Punches at Rising Action comes from the Sun-Sentinel. Rod Stafford Hagwood reviews. I have to preface this by pointing out that I think Rod's an awful reviewer; nothing to do with the quality of the show, but rather Rod's writing.

The cast — out of New York — really commits to taking nothing seriously, playing the camp with all the steely determination of a Douglas Sirk movie...

This review is thick with references to movies and movies stars. Of course, not everyone has seen all the movies being referenced, which means a lot of parenthetical information. It makes for a hard read. If you have to include an explanation of what you said to be understood, you probably should just cut the whole thing.

Those weepy "women's movies" of the 1950s — a sub-genre overripe for the plucking — inspire the play by Garet Scott.

Ah. That explains the long list of old movie references. I still think that less references and more description of the performances would aid Rod's review tremendously.
Rod loved the performances, and of the other aspects:

If you're willing to overlook the thrift store set and the almost-right costumes, then the cure for whatever ails you is in the ham being served up at Rising Action.

Just don't choke while you're laughing.

So it's a positive write-up for Rising Action. Honestly, when I read Beau Higgin's, article I thought this would be a good one. It got raves at the Fringe Festival.

Roll with the Punches winds up its brief engagement at Rising Action Theatre Company in Fort Lauderdale on Sunday. It features the cast of the New York Fringe Festival production. Beau Higgins supplies some background for you.

Christine Dolen plugs the show on her blog, but it is not a review.