Well, it's been a busy week on the Scene. Now that the air is clearing, we can see there's still a lot going on.

The season is in full swing! 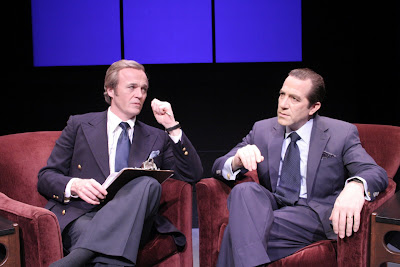 Christine Dolan reviewed the show for the Miami Herald, and found it absorbing, but not perfect:

Director Michael Hall and company plumb many of the fascinating qualities in Morgan's script yet don't fully realize its poignant power.

And while she found the casting to be imperfect, she still describes the production thus"

...the Caldwell's Frost/Nixon provides an absorbing behind-the-scenes look at how Frost managed to pull off interviews that would resuscitate his career.

Kevin D. Thompson's review of Frost/Nixon for the Palm Beach Post is similar in tone;

Morgan's play, although well-written and wonderfully acted thanks in large part to Michael Hall's direction, won't exactly grab you by the lapels from the outset. For starters, it might take you at least 20 minutes to fully invest in (Bruce) Sabath as Nixon. Although Sabath perfects Nixon's awkward body language, he doesn't look like much like the former president. But that little distraction becomes less of a factor as Frost/Nixon moves along.

And again, Kevin's ultimate take on the production is positive:

...two men engaged in an extremely high stakes cat-and-mouse game, you won't be able to take your eyes off them...

Hap Erstein wrote up the production for the Palm Beach ArtsPaper. He touched on the issue of Sabath's lack of physical resemblance mentioned by Kevin D. Thompson of the Post:

Most actors avoid direct impersonation when portraying a figure like Nixon, lest they drift into caricature. Still, Bruce Sabath is making little effort to evoke our 37th president, offering instead a cooler, more comfortable in his own skin character. When Tom Wahl as one of Frost’s coaches mimics Nixon in a mock interview, it is the Nixon we know, not the one onstage, and the difference is disconcerting.

Hap also mentioned the technical aspects of the production:

Tim Bennett’s scenic design is sparse and sleek, to allow the numerous cinematic location changes. Instead, the stage is dominated by Sean Lawson’s projections and live closed-circuit video of the interviews.

Ultimately, Hap seems to share the opinion of Thompson and Dolen:

Despite some of director Michael Hall’s casting missteps, it is hard not to become involved in the central tug-of-war or to root for the confession that the nation so needed.

Hap also underscores the relevance of the piece:

Nor is it hard to see a link between this period more than 30 years ago and today, as another disgraced president prepares to leave office, perhaps to slip into the history books without being held accountable for his own abuses of power.

Frost/Nixon plays at the Caldwell Theatre in Boca Raton through February 8, 2009.


Hap Erstein's review of Barnum! at the Maltz Jupiter Theatre. This is a co-production with the Asolo Theatre out of Sarasota. And a good one, at that:

Those who suppressed their childlike dreams of joining the circus are likely to have that urge renewed by the lively, colorful, thoroughly winning show now on view at the former dinner theater in north Palm Beach County.

And it's not all about the circus routines: Erstein finds a capable cast:

The problematic casting of the title character has been triumphantly solved by Broadway veteran Brad Oscar, an ingratiating performer who plays Barnum with childlike enthusiasm.

Oscar dominates the evening, but Misty Cotton is a strong presence as Chairy, even if she is a party-pooper most of the time. Kevin Kraft is a one-man balancing act playing nine supporting roles, Debra Walton stands out as creaky-then-powerful 160-year-old Joice Heth and Renee Brna is a soaring soprano as Swedish nightingale Jenny Lind.

And Hap's ultimate statement about the production?

Like Barnum himself, the Maltz Jupiter is intent on being a crowd-pleaser and it succeeds with this bundle of bombast.

Barnum plays at the Maltz Jupiter Theatre through Sunday, January 25. 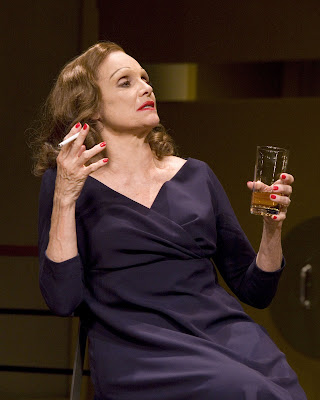 Last week, Mary Damiano raved about Looped, playing at the Cuillo Center, while Hap Erstein thought that Valerie Harper wasn't served well by a flawed script. This week, Bill Hirschman wrote his tie-breaker for the Sun-Sentinel.

...Harper deftly portrays a profane, vibrant iconoclast bedeviled by self-disgust. Despite the serious undertone, the evening is a cascade of PG-rated zingers, R-rated retorts and X-rated anecdotes so funny that the opening-night audience's laughter drowned out the dialogue.

As Bankhead, a scandal-drenched actress who would be a tabloid editor's dream if she were alive today, Harper is magnificent and gives a Tony-worthy performance that will have you rolling in the aisles. Harper doesn't just chew the scenery, she devours it, regurgitates it and then devours it all over again.

Lombardo's brilliant script crackles with a number of zingy one-liners, 99 percent of which can't be repeated in this review. Which is too bad, because all of them are funny.

I conclude that three out of four critics recommend Looped, playing at the Cuillo Center in West Palm Beach through February 15.

Promethean Theater opened Mario Diamente's A Report on the Banality of Love last week. It's a tale inspired by the true story of Hannah Arendt, a young jewess who became one of the 20th Century's most brilliant political theorists, and her affair with phenomenologist Martin Heidegger that started while she was his student in the 1920's. The play's title is a spin on th title of her treatise "A Report on the Banality of Evil," a piece ostensibly about Adolph Eichmann that many now assert was written in an attempt to excuse Heidegger's eventual involvment in the Nazi Party.

Christine Dolen was there, and found that the play succeeded on more than just the merits of Diamente's script.

In putting A Report on the Banality of Love in front of audiences for the first time, director Margaret M. Ledford has the incalculable blessing of two great, inventive actors in the roles of Heidegger and Arendt.

(Colin) McPhillamy seems every inch the preoccupied, absent-minded professor when (Amy) McKenna's timid Hannah first enters his office. Soon, though, he's using his plummy voice as an instrument of seduction, the married man with power convincing his besotted student to have an affair on his terms.

Through five encounters played out in Brechtian fashion against shifting black-and-white cityscape sketches, the two discuss their careers, relationships (including Arendt's two marriages), and what the Nazi rise to power means for Germany.

Brandon K. Thorp reviewed A Report on the Banality of Love for the Broward/Palm Beach New Times. And as always, Brandon tells it like you'd never think it would be told:

Nothing in the execution of this naughty thing suggests that these are two of the 20th Century's great minds.

Quite a contrast, isn't it? But eventually, Brandon accepts McPhillamy's portrayal of Heidegger:

On McPhillamy's face, you can read Heidegger's Nazi tendencies as rooted less in some savage impulse than in Heidegger's naive belief that no one could be as nasty as the Nazis were rumored to be. Nazi or not, he's quickly believable as a kindly (if grabby) old crank that you'd rather like to have tea with.

He takes longer to warm up to McKenna's character:

Only as McKenna's Arendt begins to understand the depths of Heidegger's betrayal does the historical and literary Arendt begin to inform McKenna's performance.

But in fact, Brandon ends up with a strong endorsement of the piece:

A Brief Report is an excellent play that's not quite as excellent as Arendt fans would
wish: a blow to the head where we might hope for a knife to the guts.

A Report on the Banality of Love plays at the Promethean Theatre in Nova Southeastern University's Mailman Theatre through January 25th.

The idea of free outdoor Shakespeare in January is lovely. On Saturday, for example, several hundred people brought blankets, beach chairs and picnic fare to Miami Beach's Flamingo Park. Fanned by cool breezes, watched over by a full moon peeking through tall palm trees, the crowd was attentive and polite, clapping after each of the play's numerous scenes.

What the audience experienced, however, wasn't quite so lovely: subsidized Shakespeare of widely varying quality.

The large cast contains some good actors, some adequate ones and some challenged amateurs.

Technically, the sound is erratic (microphones cut in and out). And placing key action in that ground-level pool obscures it, if you wind up with anyone taller than a child sitting on the blanket in front of you.

But Christine's biggest complaint may be the tenor of the piece:

Shakespeare Miami's productions are touted as plays for the whole family, but multiple-partner romantic relations and bloody child murders may not be what you envision as kid-friendly entertainment.

Shakespeare Miami presents MacBeth this weekend at Coconut Grove's Peacock Park. Directions are available on their website. Next week they're in Miami Gardens. Wherever you see it, it's free admission.

Jan Sjostrom of the Shiny Sheet Palm Beach Daily News weighs in on The Chairs, the play at Palm Beach DramaWorks that everyone's been raving about. And does Ms. Sjostrom concur with all her colleagues?

Bradshaw delivers an incandescent performance as the adoring wife who nonetheless repeatedly reminds her husband that he hasn't amounted to much and unabashedly cuckolds him with one of the guests. Leonard inhabits his role with daffy fervor.

The Chairs treads a fine line between the comic and the tragic — rather like life itself. This production, steered with precision and heart by J. Barry Lewis, plays up the humor, which makes the absurdist disenchantment go down easier. It's wild ride and a splendid piece of theater.

That's six for six! It's official, The Chairs is a critical slam-dunk. I'm seeing it Sunday; don't you miss the most celebrated show in South Florida!

Bombshells opens Friday night at the Actors' Playhouse at the Miracle Theater in Coral Gables.

New Vista opens Avi Hoffman's Still Jewish After All These Years. This is the replacement for their previously announced production of The Producers.

passing through
Laughter and Reflection with Carol Burnett this Saturday only at the Kravis Center.

last chance to see...
The Reduced Shakespeare Company's production of The Complete Works of William Shakespeare (abridged) [revised], plays at the Arsht Center through January 18.

for kids
A Very Old Man with Enormous Wings at the The Playground Theatre
Posted by C.L.J.