Baby, it's cold outside. But don't worry, it's warming up for the weekend, and it's always hot in the theatre scene.

One of the best shows of 2008 closes Sunday.

Go read the review for the rest of it.
Christine Dolen had doubts about the new musical Bombshells, which premiered at Actors' Playhouse last week. But in her own words, she was "pleasantly surprised."

Bombshells! is unlikely to be the next Broadway smash, and it can use further tweaking and tightening. But composer-lyricist-playwright Jeanette Hopkins has created one of the better examples of the let's-hear-it-for-the-girls musical genre, and in the show's first-ever production, Actors' Playhouse has served the piece well.

She liked the performances: but she also liked the artistic elements of the show:

Be sure to click through to Dolen's review. It includes a couple of audio clips of the show. 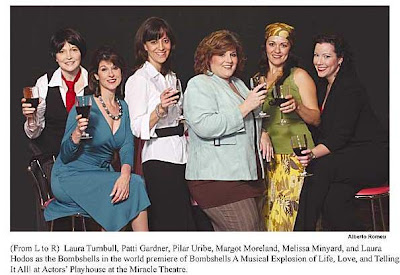 Bombshells! A Musical Explosion of Life, Love and Telling It All plays at Actors' Playhouse at the Miracle Theatre through February 8th.

Billy Crystal covered similar ground in his great solo show 700 Sundays, the differences being the particulars of the two men's lives, Crystal's greater fame, and the younger Ehrenreich's past as an aspiring rocker. But like Crystal, Ehrenreich knows how to work a crowd, and the audience at Miami's Dave and Mary Alper Jewish Community Center (the first of the performer's three South Florida stops) gets happily hooked before he's barely sung a note.

This is a mini tour, so check out the show website for times and directions.


Meanwhile, Brandon K. Thorp wrote a new review of the new play at New Theatre for the New Times (Miami).

Kissing, a brand-new play now making its world premiere at the New Theatre in Coral Gables, is so precious it ought to trigger your gag reflex.

Jeez, that Brandon can turn a phrase, can't he? But wait - I interrupted!

It doesn't. It bypasses the alimentary canal altogether and burrows straight to the heart. Cynics and hipsters might feel annoyed, but they shouldn't. Kissing was written for them.

Quite a turn, eh? For a moment, weren't you transported back to biology class? Anywho, Brandon liked the script and the performances:

For a simple play, Kissing is packed with a great many eccentricities — weird parallels, synchronicities, sudden eruptions of weirdness. Good writing, in other words.
...

Kissing is uncannily well acted, and Kyle A. Thomas, Larry Buzzeo (who plays Sam), and Jessa Thomas (who plays Tess) will come out of this thing with their SoFla theater cred deeply enhanced. Barbara Sloan (who plays Helen) delivers her best performance in several seasons...

But that's not to say that Brandon found it without flaw:

Kissing is not a perfect show. Caisley's dialogue occasionally overreaches and becomes too self-consciously poetic to work as believable drama. The meandering interactions between Sam and Tess can get tiresome and, if you're not hip to the weird time traveling they appear to be doing, confusing.

Kissing runs at New Theatre in Coral Gables through February 15, 2009.

Jan Sjostrom of the Shiny Sheet Palm Beach Daily News finally got around to seeing Looped at the Cuillo Center. She liked Valerie Harper has Tallulah Bankhead, but found that the play needs work.

See Looped for Valerie Harper's superb performance. The show has little else to recommend it. But Harper's no-holds-barred portrayal of Tallulah Bankhead is almost enough.

But like Hap Erstein, she found the script to be weak.

But (playwright Matthew) Lombardo never gets beyond pop psychology, and the situation he uses to develop the story is so unlikely that it's impossible to swallow.

So the count is now three out of four five critics recommend Looped, playing at the Cuillo Center in West Palm Beach through February 15. 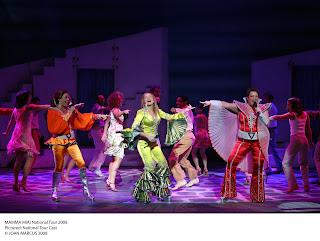 The Sun-Sentinel did their best to hide it, but I found the review of the National Tour production of MAMA MIA hidden away in the Lifestyle section, where Rod Stafford Hagwood parades his ignorance of the genre he's attempting to review by complaining about missing elements that were never there to begin with.

Gone are the townspeople as a Greek chorus. Gone are the sun-bleached lighting effects...

That's right, Rod is comparing the original staging to the movie. Tip for you, Rod; the movie version of a stage musical will always be drastically different from the original. You're complaining that an apple is different from an orange. Well, DUH.

For a proper review of Mama Mia, we must turn to Christine Dolen and the Miami Herald. And she knows what she's talking about;

The ... colossally successful stage version of Mamma Mia! -- which earns over $8 million a week in worldwide ticket sales, for a total of more than $2 billion since its 1999 London debut -- will never claim a place in the pantheon of brilliant musicals. But people love it, as gleeful crowds at the show's return engagement at Broward Center for the Performing Arts would attest.

The touring cast at the Broward Center ably delivers all the elements of the sure-fire show, from choreographer Anthony Van Laast's moves (some charming, others ridiculous) to booming versions of 22 ABBA songs, plus some curtain-call bonuses (you must stick around for those).

If you like ABBA, you'll love Mama Mia. It plays at the Broward Center for the Performing Arts through February 1, 2009.


Roll with the Punches opens at Rising Action Theatre Company in Fort Lauderdale. It features the cast of the New York Fringe Festival production.

Still Jewish After All These Years! A life in the Theatre plays at the New Vista Theatre through February 8th, 2009.

The Valerie Harper vehicle Looped plays at the Cuillo Center in West Palm Beach through February 15.

passing through
Mama Mia! the Broward Center for the Performing Arts through February 1, 2009.

The Aquila Theatre Company presents Homer's The Iliad at the Kravis Center for the Performing Arts in West Palm Beach, January 22 and 23, 2009. This touring company will also present William Shakespeare's The Comedy of Errors on January 24 and 26 in the Rinker Playhouse.

Promethean Theatre's A Report on the Banality of Love winds up its critically acclaimed run at the in Nova Southeastern University's Mailman Theatre on January 25th.

Shakespeare Miami concludes up its mini-tour of MacBeth this weekend in Miami Gardens. Directions are available on their website. The weather will be perfect to see outdoor theatre this weekend, and the price is perfect for the times; free.

Barnum plays at the Maltz Jupiter Theatre through Sunday, January 25.


for kids
Schoolhouse Rock Live! at the Miramar Cultural Center, in Miramar

A Very Old Man with Enormous Wings at The Playground Theatre, in North Miami.