Happy New Year! A lot of shows are winding it up on Broadway in the next few weeks, but things are still cooking on the South Florida Theatre Scene.

So choke down that alka-seltzer, and celebrate the New Year with a show!

Last week, only Brandon Thorp of the New Times had a review out, and now a few others have caught up with him, at least as far as Palm Beach DramaWork's production of The Chairs goes.

To be fair, I missed Hap Erstein's review because I didn't know about the Palm Beach ArtsPaper at the time. It's great to have Hap Erstein's voice back on The Scene.

Ionesco, a major figure of the Theater of the Absurd movement, took a dim view of human existence, but at least he did so with a wry sense of humor.

The lauded Broadway production of last year was described as a "laugh riot," but Hap found that J. Barry Lewis established a "melancholic mood" with "occasional outbreaks of comedy." Much of the humor comes from Pekinese-coiffed Bradshaw, one of the few area actors who can induce giggles by shuffling her feet....

Leonard is a cut below Bradshaw, but he will do, notably when asked by her to do February and he launches into an endearing impersonation of Stan Laurel. If that is not a definition of absurdism, what is?

And lest we forget, DramaWorks has an entire design team:

Michael Amico does his usual first-rate job with the scenic design, a room with enough doors and floor-to-ceiling windows to suggest the farcical potential in the play. Todd Wren’s lighting sets the autumnal mood and conveys a few of the script’s specified special effects...

Kevin D. Thompson covered The Chairs for Hap's former employer, The Palm Beach Post. But he starts out with a warning:

A theater of the absurd production is a lot like sushi: It's not for everyone.

If you're the kind of theatergoer who likes his plays to make sense and for them to follow a traditional narrative structure, well, then you should steer clear of absurdist plays which don't do either.

But that's the point.

Kevin then describes the point of Theatre of the Absurd, and if he's not defending it, he's at least making sure you understand that this isn't Neil Simon.

Even if you're having a difficult time grasping the play's deep meaning, you will nevertheless enjoy the performances under resident director J. Barry Lewis.

Bradshaw is especially impressive. Whether she's shamelessly flirting with an imaginary guest, consoling her whining husband or rearranging a group of chairs seemingly at the speed of light in one of the play's funniest scenes, Bradshaw knows how to command the stage and hold your attention. Meanwhile, Leonard, who looks a little like Christopher Lloyd's kooky Dr. Emmett Brown character in the Back to the Future movies but with less hair, has more of a straight-man role and doesn't get to shine as much as his co-star.

Kevin winds up his review with an observation that sums up the point of Theatre of the Absurd quite nicely:

The Chairs is the kind of play that will make you think long after it's over as you let the existential messages marinate in your brain.

And even after you've thought about it for some time, you're still not quite sure what to make of it.

The Chairs runs through February 1 at Palm Beach DramaWorks.

GableStage opened its production of Adding Machine right after Christmas. This is only the second musical the company has produced in its history, and the last one was a stunning success. It's a 2007 musical adaptation of a 1923 play by Elmer Rice.

Christine Dolen of the Miami Herald weighs in with her review.

...even given the cyclical nature of history, it is sure to strike you that Rice -- whose subjects include technology rendering certain jobs (and the humans who do them) obsolete, workplace violence, miserable marriages, religious fanaticism and reincarnation -- was downright prophetic.

And what's a musical without a score? Christine finds this one worth discussing:

The music of Adding Machine is closer to the work of Stephen Sondheim or contemporary opera than it is to classic American musical theater. For the most part, the largely through-sung show's music and storytelling are one and the same, devilishly challenging (but often strikingly beautiful), artful in linking the mathematical nature of music with the inner thoughts of its tormented central character, a sad little nothing of an accountant aptly named Zero.

And she also recognizes the challenges of mounting such a piece:

Pulling off a piece as complicated as Adding Machine is a challenge for any company, let alone a small one that so rarely does musicals. Adler, collaborating with his gifted musical director Eric Alsford, delivers the goods with drama, clarity and simplicity (except for Lyle Baskin's lavish rendering of Elysian Fields, in the style of Maxfield Parrish).

Christine concludes her review with a cryptic remark:

If a show like My Fair Lady is your cup of tea, Adding Machine may seem rather odd. But it is undeniably dramatic musical theater, excellently realized and of a piece with GableStage's edgy fare.

...it's doubtful any GableStage punter would claim this musical is bad or even mediocre. In fact it is good in all the standard ways: well written, well directed, well sung, well acted, trenchant, unpredictable. But it is not entertaining, which is only proper. For GableStage's executive artistic director, Joe Adler, it is a bad day when he does not make somebody squirm...

Yes, this is the kind of review only Brandon can bring us.

...at the bleeding, oozing ass-end of 2008, who in the audience really wanted to spend their Saturday night watching some poor bastard chewed to a pulp by the grinding gears of capitalism? Nobody, that's who. It would be like Barack Obama unwinding with some popcorn and the Zapruder film.

Brandon goes on relentlessly about the relentlessness of the play, but he does slip in some review of the performance:

Even those rare characters who show a hint of human emotion — such as Mr. Zero's fellow death-row inmate, Shrdlu (Jim Ballard), who sings with all the desperate grandeur of a late-Seventies Elvis, and Mr. Zero's paramour, played with gorgeous wistfulness by Stacy Schwartz — cannot see beyond their own guilt, station, or particular hangup. They are all marionettes, controlled by something we cannot see.

Overall, Brandon finds this to be a dark piece, but despite it all, he still manages an endorsement, of sorts:

But it still has power as art. Let's hope we can respect it as such, despite our fear that Loewith and Schmidt's choice of source material won't prove prescient. Our fear is useless in any case. Canaries, after all, do not kill miners.

The Adding Machine plays at GableStage through January 25th, 2009. 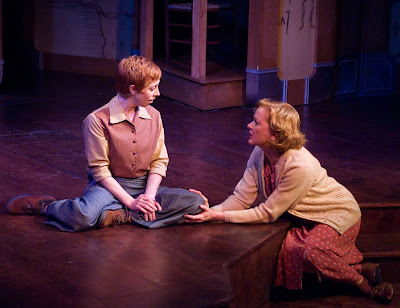 Since I've discovered Hap's reviews, and since Mezzullah is still playing, it's only right that I mention Hap's review of Mezzulah, 1946 in this week's Scene.

Director Louis Tyrrell renders this world with affection, glossing over some of its potentially cloying elements, and moving it along effectively on Richard Crowell’s slide-out sets, decorated with bits of the notebooks of Leonardo Da Vinci -- Mezzulah’s inspiration.

Although it loses a few points for neatness, Mezzulah, 1946 eventually coalesces into an evening worth savoring.

Frost/Nixon opens at the Caldwell Theatre. It's the powerful play that has since been turned into a major motion picture.

But film can't do justice to a play. See it live, and then see the movie at your leisure.

Looped, a biographical play about Tallulah Bankhead, is in previews this week at the Cuillo Center. This is a pre-Broadway engagment of a new one-woman show featuring Valerie Harper. It opens January 7th.

Regrets Only at the Waterfront Playhouse in Key West runs through January 10.

Avenue Q is now playing at the Broward Center for the Performing Arts. Christine Dolen reviewed it for the Herald.

...leave the younger kids at home. Just go and enjoy a masterful, funny, touching musical about young adults trying to piece together the puzzle of post-collegiate life.

But don't wait too long: it loads out January 11th to go to the next stop. And to sweeten the deal, they have a lottery going that gives you a shot at tickets for $25!

Meanwhile, Broadway Across America presents CATS at the Adrienne Arsht Center for the Performing Arts. It plays now through Sunday, January 4th, so you don't have a lot time left to see this legendary musical.