The Talk About Town

There's quite a number of theatre-related stories in the local press this weekend, in addition to the various reviews. The Miami Herald has blurbs about Dead Man's Cell Phone and The Glass Menagerie. And on top of that, Christine Dolen blogs about a casting opportunity for Billy Elliot the Musical, one of Broadway's hottest properties. Yes, they are holding auditions for Young Billy in Orlando, and Christine tells you everything about it.

Christine also plugs a new album from a South Florida veteran, Rachel Bay Jones. Rachel has performed at every major theatre in South Florida (Most recently in Urinetown at Actors' Playhouse), following in the footsteps of her parents, themselves veteran actors: Dennis and Mona Jones. Rachel has played Broadway (Meet me in St. Louis, The Boys from Syracuse), and toured extensively on top of appearances in regional theatres around the country.

And now she's added recording star to her resumé; she's recorded her favorite songs from musical theatre and given them a folk twist on ShowFolk. You can click through and hear samples of the tunes: and it's worth doing so.

Mary Damiano at Miami Artzine interviewed playwright Michael McKeever about Dangerous and its production at the Caldwell Theatre. It's a little edgier than recent fare at the venerable Caldwell, but Caldwell cut its eyeteeth on edgy plays in its youth.

Hap Erstein at Palm Beach ArtsPaper also has a preview piece on Michael McKeever's racy new play, Dangerous, opening this weekend at the Caldwell. Here we learn that not only is there nudity in the play, McKeever is insisting on it. But it's not for shock value or titillation; nothing makes you more vulnerable than nakedness, and the intent is to literally strip away any sense of armor the characters might have. And that's not new ground for the Caldwell.

uVu is PBS Channel 2's video blog. Among their offerings is an interview with the cast of Caldwell Theatre's production of Michael McKeever's Dangerous.

It includes some footage of the performance, and part 2 is with Michael McKeever and director Clive Cholerton.

The audio isn't great, but we don't often get to see the inner workings of the play and the performance like this.

Dangerous is also included in the ArtsPaper's Weekend Arts Picks, along with Lake Worth Playhouse's production of Arthur Millers The Crucible.

“At the end of the day I’d go get on the bus, and I would watch my friends drive by in their very expensive cars, and it was humiliating. And then I’d get off the bus and all the kids at Allapattah would be waiting to beat me up because I talked like a little white girl,” Thompson told the group.

The ever-sloppy and incompetently edited Sun-Sentinel website managed to hide Bill Hirschman's blurb about Liberty City from us for an entire week, but we found it while the show's still playing. HA! We FOILED you, Sun-Sentinel! We found a relevant news story despite your best efforts! 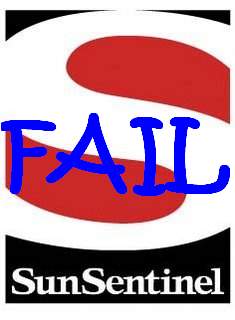 Disapointingly, the Sentinel is ripping off its readers by re-treading a Christine Dolen review previously published in the Herald instead of sending out Bill Hirschman. Guys, you have to do your own reviews: using someone else's is completely unacceptable, and it's costing you readers. Theatre isn't like film or TV: it's only here, and it's only now, and the only way we can determine whether it's worth the bother is by reading all the different reviews and then making a choice. By failing to live up to its journalistic responsibility, the Sun-Sentinel is failing its community.
Posted by C.L.J.

Email ThisBlogThis!Share to TwitterShare to FacebookShare to Pinterest
Labels: news