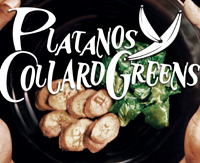 David Lamb's Platanos and Collard Greens opened at the Adrienne Arsht Center for the Performing Arts on February 17, 2010. It was previously staged off-Broadway in New York back in 2003.

Spicy, sweet and delicious, Platanos and Collard Greens is the long-running off-Broadway hip-hop romantic comedy that asks if love between blacks and Latinos can survive. College kids Freeman and Angelita give it a try—until her Mom finds out and has a heart attack. It's a star-crossed love affair guaranteed to make you think while laughing out loud!

A patron's view: Midtown Chic-a caught the show, and blogged about it. It's just what you want to hear from your audience:

...this past weekend, Juan and his cousins, Jessika and Jared and I all walked over to the Arsht (best part of living in midtown – you can walk there!) to catch the Friday night show. Needless to say, from the moment we sat down to the moment it ended, we were all doubled-over with laughter and reciting memorable lines from the show.

I personally loved the combination of spoken word, hip hop references and musical talent shared amongst this clever cast. There were definitely times when I would look at Juan and whisper “Did she just say that?!” or “Oh yea, I’ve heard that one before!” that give it this element that was all a bit too close to home. But by the end of the show, we were all walking out with huge smiles on our faces.

...kudos to the Arsht for taking chances with features such as this. It opens the whole theatre experience to a broader audience.

(h/t to Rick at the South Florida Daily Blog)(and no, I'm not counting it as an official review, but since Artzine's write-up fell into the gutter, I thought I'd include it).

Though it has been compared to a modern-day West Side Story, it is in no way as polished or moving as its grand musical predecessor.

But it is, more often than not, an experiment in form that is a blast to watch.

Playwright Lamb, an attorney who turned his novel Do Platanos Go Wit Collard Greens? into a play that has found ongoing success on the college theater circuit, doesn't work from any kind of traditional dramatic structure. Instead, Platanos and Collard Greens is a mash-up of poetry slam, hip-hop, comic scenes, history lessons and the occasional flavoring of dramatic tension.

Platanos and Collard Greens becomes a crazy-happy evening of theater because of its deft performers. Smith originated the role of Freeman seven years ago, and he nails all of its humor and style. Preston Taylor plays OK, a wannabe superstar of the music biz, and the roar he gets as the cast takes its bows is completely deserved -- he is broadly but riotously funny. Comas, who also staged the show at the Carnival, makes Pops the kind of goofball dad who's completely fine with embarrassing his son.

...the two women who really seize attention in Platanos are, unsurprisingly, the ones with the funny roles. Florida International University grad Raven Garcia is a hoot as two different friends of Angelita's, terrible would-be singer Nilsa and club girl Julia. And Krystal Farris is stylized perfection as Malady, an ambitious girl who once crushed on Freeman but proved too much for him to handle.

Platanos and Collard Greens plays at the Adrienne Arsht Center for the Performing Arts through February 28, 2010.
Posted by C.L.J.