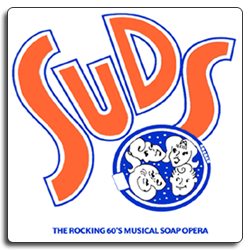 The Stage Door Theatre opened its production of Suds on April 16, 2010.

SUDS is a bubbly 60's musical about romance in a Wash-O-Rama. From Chapel of Love to Don’t Make Me Over, SUDS is the show critics have raved about. "Joyous songs that will take you back to the first kiss, the last dance and making out under the boardwalk". The story of three girls trying to find love in a laundromat, SUDS bubbles over with fluffy!

Justin Michael Lore shows his versatility in a myriad of roles.

Emily Senn (Cindy) is tireless in a demanding role, and she has a nice singing voice. Rebecca Cesario is sweet as DeeDee, and plays well off of Marissa Rosen as Marge. Her voice is almost as pleasant to listen to as a soloist as Senn's... Marissa Rosen's voice is the most interesting, though her character is the least inviting.

Bill Hirschman reviewed for the Sun-Sentinel:

Awash in pony tails and references to icons such as the Corvair, the nostalgic humor of Suds is intentionally broad, augmented by director/choreographer Dan Kelley's classic comic staging.

The energetic cast nails most of the numbers written before they were born. Rebecca Cesario as the novice angel torches "Today I Met the Boy I'm Gonna Marry." Marissa Rosen as the acerbic veteran croons "You Don't Have to Say You Love Me." Justin Michael Lore appropriately hams up several parts from Johnny Angel to a washing machine repairman, but it's weird watching a white guy in a white tuxedo singing James Brown's "I Feel Good." Emily Senn is an appropriately winsome heroine and she fearlessly dives into every pity party ballad.

The vitality is significantly amped up because Stage Door has abandoned its usual taped accompaniment and brought in David Nagy's drumhead-tight pit band. Even though the music is pumped through the auditorium's speakers, the difference in energy is noticeable.