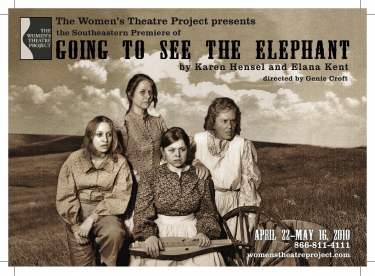 The Women's Theatre Project opened its production of Going to See The Elephant on April 23, 2010.

At a sod hut in the Kansas wilderness of the 1870's, four frontier women wrest a living from the stubborn soil.  As they cope with wolf attacks, a constant fear of Indians, and the dismal isolation of the prairie, they talk of "going to see the elephant" - crossing the next hill to see what lies on the other side.  It is this sense of striving to achieve all that life can offer that gives the play its power and beauty - and makes it clear that the wilderness was not tamed by men alone.


There's a lot of sweet humor in Going to See the Elephant. There's terrific suspense when the wolves, or maybe it's the Indians, come prowling in the night. And there's great emotion...

Anne Chamberlain is so grounded on stage she locks the show in place from start to finish. And Jackie Rivera's Etta, traumatized by her kidnapping by the Cheyenne, is jittery rock solid as she tells of her wedding plans and then, later, bravely speaks for the first time of her life with the Indians.

Jodi Dellaventura gets cheers for the realistic set.

Despite minor annoyances such as abrupt music and light cuts, director Genie Croft has presented an entertaining production of a show that has a little singing, some blood and guts, high emotion and some good performances.

Under Genie Croft's direction, the cast members vividly etch their characters, sometimes narrowly escaping becoming frontier stereotypes, but escaping all the same. Bondi is salt-of-the-earth solid as a wise woman who is (as she points out to Sara) not dead yet. Chamberlain, who beautifully delivers snippets of old-time folk tunes, is empathetic as a woman who must grapple with challenges both from the outside and from within her little family. Vivanco makes Helene as starchy as her fancy dress, and Rivera conveys both Etta's sweetness and her deep emotional damage.

The Women's Theatre Project production, though set in the past, offers plenty of still-resonant insights into the human mystery.

The Women's Theatre Project presents Going to See the Elephant at Sixth Star Studios through May 16th, 2010.
Posted by C.L.J.