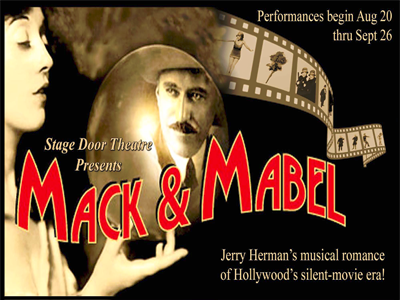 The Stage Door Theatre previewed its production of Mack & Mabel for a week starting on August 20, with the Grand Opening on August 27, 2010.

The musical story of the tumultuous relationship between Hollywood director Mack Sennett, and his biggest star, Mabel Normand (a waitress from Flatbush Ave). With a blockbuster score by Jerry Herman, “Mack and Mabel” was nominated for 8 Tony Awards, including best Musical.

Roger Martin, who was the first to review the show, discovered he reviewed a preview.  So he went back and re-reviewed for Miami Artzine:


...reviewers seldom attend previews. It's not fair to the theatre. Or the critic.

Did the extra two weeks make a difference? Sure they did; just what you'd expect. A tighter, brighter show with actors having fun and audience members not saying things like: “It was drearier than I thought it would be.” But the sound mixing is still off with too often the singers being drowned by the accompaniment.

The standouts now are still the terrific Shane Tanner, Mara Gabriellle. who's found the humor in her role and Ken Clement as Fatty Arbuckle. The good news here is that Cusimano is now looking at the people to whom she speaks but the bad news is that you still can't hear the the first, second or third words in her big number.

So was it worth going back to Mack and Mabel? Very much so. The wonderful Jerry Herman music and the strong performances from the principals make this a constantly entertaining piece.


This production has crisp choreography by Chrissi Ardito. She makes the most of the stage space in "Hundreds of Girls" and in the Keystone Cops chase scenes. "Tap Your Troubles Away" is beautifully danced by the ensemble, led by Kelly Cusimano as Lottie.

Mara Gabrielle is sweet as Mabel...


Shane Tanner is undeniably commanding as Mack Sennett. His singing voice is polished, and his acting provides a Mack that is driven, masculine and unapologetic. Tanner's performance is a force to be reckoned with...

Jeffrey Funaro is perfect as the slick and handsome William Desmond Taylor... While Kelly Cusimano dances Lottie well and looks the part, she seemed tense on the night attended, as if she was concentrating very hard on smiling. Ken Clement is icing on the cake (or in this case whipped cream on the pie) as Fatty Arbuckle. His size and comedic flavor fit the role as though it were written for him.


After first-rate productions of‭ ‬A Little Night Music and‭ ‬The Drowsy Chaperone,‭ ‬and now a very credible mounting of the problematic‭ ‬Mack and Mabel,‭ ‬we are going to have to stop being so surprised when the Broward Stage Door Theatre delivers satisfying entertainment.

Less successful in an even less-dimensional assignment is Mara Gabrielle‭ (‬Mabel‭)‬,‭ ‬but she too knows her way around a song...

Director Michael Leeds builds scenes from the script outline,‭ ‬managing a more cohesive narrative than exists on the page.‭ ‬And whenever the story starts evaporating,‭ ‬he relies on choreographer Chrissi Ardito to cover up the plot holes with dance flash.‭ ‬


As Mack, Shane R. Tanner is a big booming delight and Mara Gabrielle's Mabel has everything — ringing voice, energetic dancing — but not that sprightly spirit an ingenue needs.

And the lack of chemistry between the two leads is a problem (in that vacuum Ken Clement as Fatty Arbuckle almost waddles away with the show), even though you'll hardly have time to notice...

So, if we'll "hardly have time to notice," why is it a problem?

Which is slick-looking writing that avoids actually communicating anything meaningful about the show.  Another worthless review from the newspaper that's fit only to wrap fish.


Herman’s beloved show has been resurrected by Broward Stage Door Theatre under the loving guidance and a few tweaks from director Michael Leeds, who performed in the first national tour.  ...while Leeds assembled a perfect cast, it is the detail and timing in his direction that makes this production shine...

The dashing Shane Tanner as Sennett had more than a few ladies—and a few men, too—swooning... His soaring voice helps him carry the production...

...Maya Gabrielle... a New York import, perfectly captures the naivete of a girl swept into the glamorous world of Hollywood’s heyday.

Local favorite Ken Clement is perfectly cast as Fatty Arbuckle, the “butt” of the gags in nearly every Sennett film and he is supported by a strong comic ensemble including Stacie Johnson as skeptical pianist Ella, Kelly Cusimano as tap dancing chorus girl Lottie, and Bob Levitt as the “straight guy” producer Kleiman.

As Mabel, Mara Gabrielle exudes the perfect combination of pluck and radiance.  Gabrielle is the kind of performer who draws your attention whenever she’s onstage. She and Tanner have real chemistry...

Ken Clement is funny and endearing as silent movie comic Fatty Arbuckle, especially in his Act Two opener, When Mabel Comes in the Room. As Sennett actress Lottie, Kelly Cusimano is a straight-talking, tap-dancing tornado.

Director Michael Leeds deftly switches gears between the comedy, drama and slapstick of Mack and Mabel,  weaving all three into a seamless tapestry of entertainment. Kudos to music director Kevin Coughlin and sound designer Wayne Sherman, for making Stage Door’s pre-recorded tracks sound as if an orchestra were in the house.

Mack and Mabel is one of Stage Door’s better musical productions in recent years, a delight from start to finish.

The problem with this show is not only the darkly clichéd book by Michael Stewart. It's that the Broward Stage Door production simply doesn't sparkle. It's a messy show with too much business and poor sound mixing.... We get to see the staging of the two-reel comedies, the Bathing Beauties and the Keystone Kops but no one's having any fun.

Chrissi Ardito's imaginative choreography works well and the ensemble dancing is a strong plus.

...the only standout is Shane R. Tanner as Mack. He acts, sings and moves well, almost carrying the show alone. Mara Gabrielle as Mabel lacks any air of innocence as a young woman. Hers is a one-note performance, hard edged and unsympathetic. And second lead Kelly Cusimano... not only breaks the fourth wall with every speech but in her big number “Tap Your Troubles Away” swallows the first words of every line she sings. We are left wondering if she doesn't know the words or simply can't tap and sing at the same time. Ken Clement's many talents are under-utilized in the role of Fatty Arbuckle.

Mack & Mabel plays through September 26 at the Stage Door Theatre.
Posted by C.L.J.