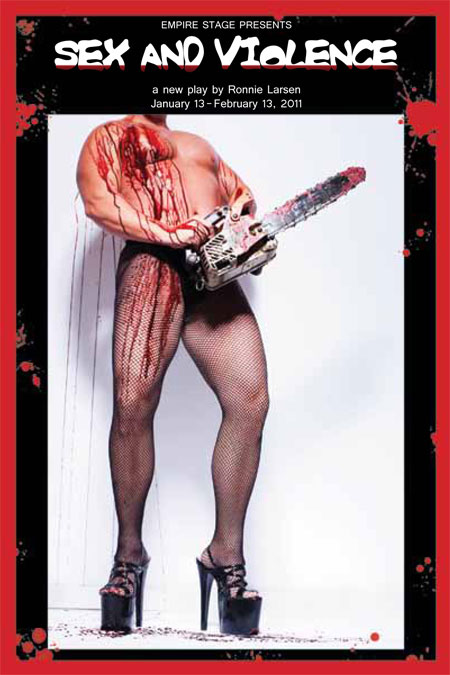 
Larson’s play essentially follows the twists and turns in the life of a straight, best-selling author after he becomes obsessed with the true story of a troubled Harlem transsexual  who murders her lover and stores his body in her closet.The writer, Jack, must fend off conniving homophobic publishers while researching the story with trannie Sezette, a relationship that soon becomes romantic.


A night at Empire Stage is like a night at some Off-Off-Off-Broadway theater.The space is an intimate black box in a former warehouse, everything is held together with bubble gum and duct tape, and the company resourcefully stretches every tight budget dollar. In fact, on opening night, an electrical connection blew delaying the curtain (if they had one), but cast and crew alike held their composures and the show went on, despite the glitch.

Gordon, Perez and especially Marsh all deliver the solid performances local audiences have come to expect and the weakest link in the boring Sezette (Betto), who delivers every line in a droll monotone that is completely out of character for a larger-than-life female impersonator.

The biggest challenge for Empire Stage is Larson’s script.The first act is choppy and bounces between present day and 1979. Scene changes are way too long (perhaps in deference to the sound designer), at times halting the story, and the flashbacks are not clearly delineated.While the first act sets up a plausible, engaging premise, Larson loses focus and wanders all over the place in the second...

Despite the structural downfalls,Sex and Violence at Empire Stage will provide a fun evening out if you remember Fort Lauderdale is Off-Off-Off-OFF-Broadway.

Sex and Violence plays at Empire Stage through February 13, 2011.  The producers have extended a special offer to Theatre Scene readers; $20 tickets, which is $10 off, to anyone who mentions SouthFloridaTheatreScene.com when reserving or purchasing tickets. This is for cash tickets only.  Online and credit card tickets are always $30.  This is the first time anyone has made this offer to Theatre Scene readers, and I'm curious to hear how it turns out.
Posted by C.L.J.