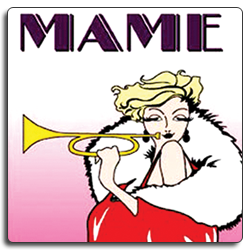 The Stage Door Theatre opened their production of MAME on December 24, 2010.


Some of Mame's wild, adventurous spirit is inside everyone who lives for the moment and believes that "life is a banquet!" It's the height of the 1920's and Auntie Mame becomes the guardian for her ten-year-old nephew, Patrick. Special songs include Mame, It's Today, Open a New Window, If He Walked into My Life, We Need a Little Christmas, Bosom Buddies and That's How Young I Feel.


...when Newinsky opened her mouth to sing Jerry Herman’s rousing and touching score Saturday, the audience felt itself in strong, capable hands. Her clarion voice has a deep warmth that caresses a song when she croons it... She makes you glad you bought a ticket.

Unfortunately, as an actress, she fails to put over the emotions simmering under Mame’s brio. It results in a flattened feeling...

The same can be said for the entire production under Dan Kelley’s direction. When the 19-member cast melds for a full-throated chorus number or a spirited dance break, you’re grinning with pleasure.

But the cast fails to make much of the witty dialogue by Jerome Lawrence and Robert E. Lee, adapted from their even funnier play. Laugh line after laugh line fly past without anyone even sticking their mitt out to catch the opportunity. There’s little electricity and little heart but plenty of dead air between what should be rapid-fire zingers.

Still, there are plenty of plusses: Jill Anthony Taylor’s woebegone nanny/secretary delightfully details her dilemma as an unwed mother after following Mame’s exhortation to go out and live in Gooch’s Song.

Even more crucial to the success is Brian Inerfeld. The rarely spoken secret is that very few local child actors can carry their weight in a major role. Inerfeld is an exception. As the penny-bright young sponge for Mame’s plunge into the marrow of living, Inerfeld is a winsome, winning personality with bright eyes and a strong, expressive voice.

Chrissi Arditto’s high-stepping cakewalk choreography is unassailable as usual, but the scenic design that involves a turntable cuts the stage area so shallowly that she and Kelley work hard to keep people from bumping into each other. That design also replaces the long staircase center stage used for Mame’s grand entrances, instead cramming a flight of steps onto the left side of the stage.

Mame plays at The Stage Door Theater through February 6, 2011.
Posted by C.L.J.