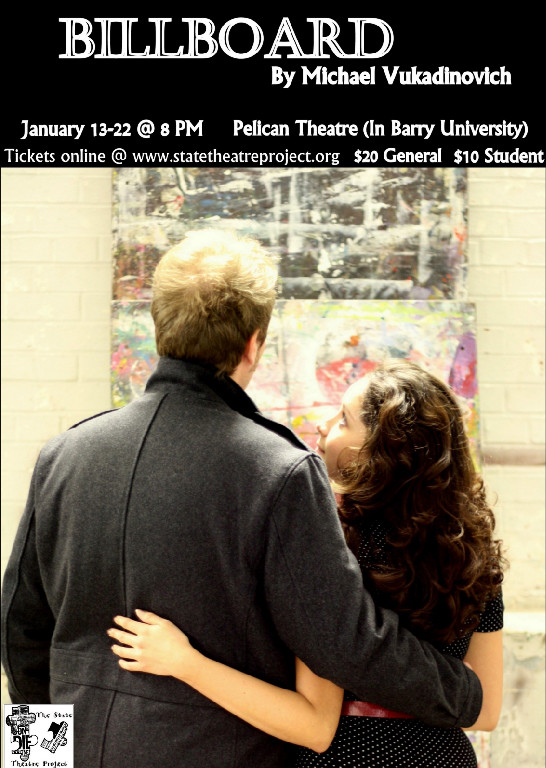 
Andy, a recent college graduate weighed down by student loans, gets paid a great deal to tattoo a corporate logo on his forehead. His artist girlfriend Katelyn is not impressed, his liberal best friend [Damon] thinks he's crazy, and now he has to live with it. The decision has both tragic and comic consequences as he comes to learn that the logo is more than just ink on his skin. But Katelyn sees a very unique artistic opportunity. She sees his body as an example of the extent to which consumerism has permeated our daily lives. Billboard is a comedy about the battle between commercialism, fame, art and love


A learning curve comes with almost everything in life, including the creation of a theater company.

The State Theatre Project, a troupe consisting mainly of New World School of the Arts drama graduates, has spent a little more than a year building toward its first full-length production. The group's choice, Michael Vukadinovich's Billboard, certainly fits within its mission of producing socially conscious, issue-oriented work aimed at a younger audience. But the play and State Theatre's production at Barry University's Pelican Theatre aren't nearly so dramatically polished as their creators intended.

The artists behind the State Theatre Project are a talented bunch. And with better choices, greater resources and movement along that learning curve, there's a good chance that they'll evolve into the edgy company they envision.


The State Theatre Project was founded just over a year ago with a stated mission to present socially relevant works. Vukadinovich’s Billboard, the company’s first full-length play, is a fitting selection, presented here in its regional premiere.
Billboard is a bit of a tough sell, a three-person dramedy with a single sparse set. The play’s biggest flaw is that it works too hard at conveying its message... nothing ever quite hits a fever pitch.

The three actors, Scott Douglas Wilson as Andy, Gladys Ramirez as Katelyn, and Justin McLendon as Damon, deliver earnest performances, and are at their best when allowed to dig deeper into their individual character’s psyches

David Hemphill, founder of The Project, directs Billboard with a comfortable ease, ideal for the intimate setting he’s chosen at Barry University’s Pelican Theatre..  However, he could have worked a bit more to help the three actors form a tighter ensemble. At times, it feels as if they are each fighting each other for single attention, rather than working as a cohesive unit.

Still, Billboard provides a worthwhile chance to experience a new play performed by a young troupe that holds great promise.


There are the usual arguments about art and commercialism, the freedom of the artist, what is art and so on but nothing really happens...  It's as if the playwright, Michael Vukadinovich, knew he didn't have much going apart from the original forehead idea and needed to somehow fill out two hours.

The actors do what they can with this cluttered piece.  Justin McClendon and Scott Douglas Wilson certainly belong on the stage, but Gladys Ramirez shows her inexperience.  Had not director David Hemphill been acting in another show during the rehearsal period he surely would have tightened this rather loose production.

It's a shame to have to knock the first efforts of a young company but Billboard with it's 1960s higgldey-piggldey feel and which presumably reads better that it plays, is not the piece to showcase blossoming talent.

The State Theatre Project production of Billboard plays at The Pelican Theater through January 22, 2011.
Posted by C.L.J.