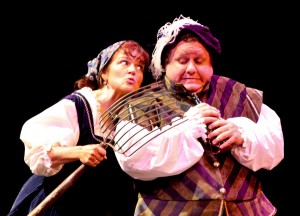 Mea Culpa
Last week, I utterly failed to mention that Ken Clement was playing Sir Toby in Twelfth Night in Pensacola.  Here, the Pensacola Shakespeare Theatre itself talks with him, and the Pensacola News-Journal had a very brief story.

Neither Dead, nor UnDead
The Drama Queen tells us that the opening of Promethean Theatre's Song of the Living Dead was pushed back a week due to its lead getting strep throat and/or tonsillitis.  We hope that Matthew William Chizever has a quick recovery, and remind him that gargling with warm salt water REALLY REALLY helps.

Ring a Ding Ding
The Jerry Herman Ring Theatre at the University of Miami  will presenting the world premiere of Forever 54, a new musical by Mark Saltzman to be directed by Tommy Tune.  The Ring will also be collaborating with The Arsht Center on Nilo Cruz's Night Train To Alba, written and directed by the playwright.

Hot from the Herald
The Miami Herald recaps GableStage's next season.  It also reminds us that Conundrum Stages is presenting On the Boards: Our Alternative Theater Festival this week, and gives the line-up.  A lot of good stuff.  And Mad Cat is back with So My Grandmother Died, Bla Bla Bla.

Speaking of  Mad Cat
Miami Artzine has a sit-down with Artistic Director Paul Tei, who also wrote their current offering.

Speaking of New
Theatre Mania reports that the South Miami-Dade Cultural Arts Center will be holding its grand opening in October.

Among the theater highlights of the Center's inaugural season is The Asolo Repertory Theatre's Hamlet Prince of Cuba (May 17-20), adapted from Shakespeare by Michael Donald Edwards, with Spanish translation by Eduardo Machado. Asolo Rep will also present Hamlet Redux on Friday, October 14.

Sweet
BlackNews.com reports that the African-American Performing Arts Community Theatre has landed the rights to present Jelly Belly, the award winning play by Charles Smith.  Wait, this isn't about candy at all!

It's Not Just A Musical Anymore
Urinetown comes to life.  No, not the production coming from Slow Burn Theatre.
Posted by C.L.J.