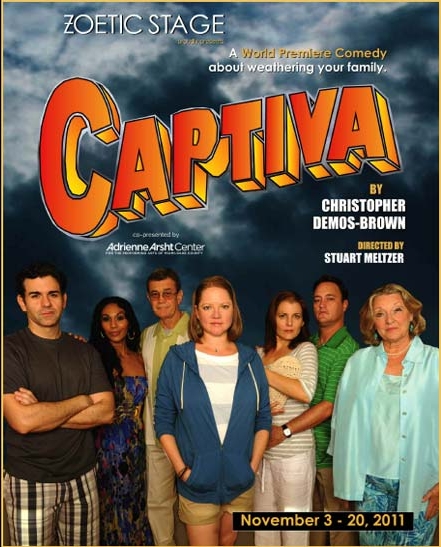 
Over the course of a weekend reunion, three siblings come together in the hopes of celebration and re-connection.When their parents join them, rivalry, sex and a hurricane turn the family upside down. Stranded together, they are forced to face each other with honesty and bottles of wine. Captiva is a smart and stinging contemporary comedy about family, fear and the future. From the Carbonell-Award winning playwright of When The Sun Shone Brighter.


...every once in a while a show like “Captiva” comes along, a play so absolutely extraordinary that it’s hard to imagine it was written by a homegrown Florida writer and not the latest darling from Broadway... this modern masterpiece is worth the drive down; you’ll be able to say you were one of the first audience members to see a show that will surely move to other markets.

...revelations tend to spill from the characters, each one triggering the next like dominoes, in a busy second act that takes place partly in the dark, after a stormy power outage creates emotional pandemonium that is managed with extraordinary aplomb by director Meltzer.

If and when “Captiva” plays beyond South Florida, it will likely earn comparisons to Tracy Letts’ Broadway hit “August, Osage County,” which also explored the collapse of an extended American family. But “Captiva” is better, because it’s funnier and less didactic. I think a stronger comparison would be to filmmaker Robert Altman will a dollop of onetime Altman collaborator Raymond Carver – not just because it borrows the bustling ensemble casting of so many Altman films, with their overlapping dialogue, but in its manner of staging. “Captiva” is a play in CinemaScope, if that makes any sense. The cabana is like a widescreen canvas, where actors emerge from the dressing room simply to relax on set, and the spectator has a degree of control as to what he or she chooses to look at at any given time. It’s a liberating feeling for a play, one of many reasons to experience this wonderful production.


Carbonell Award winner Christopher Demos-Brown’s new script, Captiva, was scheduled to have its world premiere this season at the now-defunct West Palm Beach company. Fortunately, this dysfunctional family reunion play was quickly picked up by Miami’s fledgling Zoetic Stage where it is currently playing and receiving a vigorous, darkly comic production from the troupe’s acting ensemble.

If Demos-Brown’s earlier political drama When the Sun Shone Brighter did not convince you of this lawyer-turned-playwright’s talent, the versatility he shows with the vastly different Captiva should persuade you he is the real deal.

Matthew is handed many of Captiva’s best lines, but Durkin certainly knows how to deliver them for maximum comic effect. Brazda is required to keep Val enigmatic, which works to her disadvantage in forging a concrete character, but she gains and retains audience empathy from the start. And for her non-musical debut, Alvarado manages to hold her own in this accomplished company.

...after seeing Captiva, you are likely to seek out other work by Demos-Brown, as they surface both locally and nationally.


Oh great!  Another family reunion and the clichéd all hell breaks loose.  Done before?  Many times.  But not like Christopher Demos-Brown does it in the world première of his witty, intelligent Captiva...

This is a good cast doing justice to Demos-Brown's literate, funny and engrossing script, but I have to tell you my eyes were never far from Durkin and Richberg.  Todd Allen Durkin is so easy and confident on stage that, no fault of his; he's simply a natural scene-stealer.  And Nicholas Richberg is right there with him.  Where Durkin scores with his slyly blustering, tear everything down performance, the always-listening Richberg delivers a subtly nuanced Luke who's immediately captivating.

It's a good evening at the theatre, watching this unveiling of Captiva, well directed by Stuart Meltzer who puts us inside the family right from the beginning.  The show, as written, is a little too long and loses some of its frantic first act pace after the intermission.  Although the weekend cottage is in the heart of a hurricane, power out, rain, lightning and thunder, little notice seems taken by the family as they drink and bicker and tell their sad tales.  But they're still damn funny.


...it's smart as hell and funnier than a supermodel taking a dump.


...Richberg's performance as the uptight academic seemed forced at the outset of the play, but blossomed by the end of the first act.

Durkin, on the other hand, exhibited comedic brilliance. His imposing beer belly bumbled back and forth across the stage, and his floppy appendages followed, giving him the look of a guy rendered permanently doltish as a result of consuming too many Coors Lights in the direct Florida sunlight. A combination of really funny writing and really well-timed delivery made this Belushi-esque actor (more Jim than John) the unofficial star of the show.

...mother Emily (Barbara Bradshaw) was pretty stellar too. A total headtrip of a performance, she managed to convey a confused, yet nurturing matriarch, made more interesting by the occasional slip of a cyanide tongue. We would go so far as to say that Bradshaw's performance reminded us of Meryl Streep at times.

The playwright's dark and intelligent sense of humor, coupled with some standout cast members, make this show about longing and belonging a stage gem suitable for anyone who likes to laugh out loud, while crying a little inside.


Captiva is a brilliantly observed, finely etched portrait of the familial ties that bind in every sense of the word. It’s also one of the finest works of theater we’ve seen in the strongest 18 months of theater this region has produced in recent memory.

The overlapping dialogue, the simultaneous conversations among different people in the same room is a schematic of the modern family’s difficulty in communicating... The technical skill needed by all parties involved to make the content of these scenes (a) believable and (b) comprehensible amid the cacophony is an underrated but outstanding tour de force.

Demos-Brown’s facility with language – both vocabulary and rhythm — is stunning.

Although every performer is pulling from a deep bag of tricks, the naturalistic acting is amazingly nuanced and skilled. Even newcomer Alvardo is totally believable. It would take another article to adequately praise their ability to master the dialogue and plumb the multiple levels of the script.

But Durkin surpasses virtually anything he has done to date, which is saying something when you consider that includes Thom Pain and Blasted. It’s not that he goes somewhere you haven’t seen him go before. It’s that he does it with a stunning amount of technique carefully smoothed over so it looks completely natural. His ability to express disbelief with a deadpan stare or a raised eyebrow is both deft and hysterical.

Meltzer proves a fine ability to pace and orchestrate the madhouse, allowing for comic timing and dramatic silences. Demos-Brown could not have asked for someone more in tune with the material and able to get that vision on stage.


...Captiva offers further proof of this relatively new playwright’s intelligence, talent and evolving craftsmanship... a treat on multiple levels, from the writing to the performances to the staging and design.

Director Stuart Meltzer’s deft cast makes the most of Demos-Brown’s clever retorts and sudden emotional shifts. Val, Luke and Matt... become combative kids again whenever Bradshaw’s beautifully played Emily delivers a withering expression of her “concern” or Schwartz’s macho-guy Tom does his bull-in-a-china-shop bit in the suddenly claustrophobic living room. The scene in which the combative exes recall the births of their children is one of the best and sweetest in the play, and Bradshaw and Schwartz play it exquisitely.

Among the “kids,” Durkin gets the standout role as the boorish yet likeable Matt. Or maybe Matt is hard to despise, despite his cutting allusions to Luke’s sexual orientation and Val’s lack of success, simply because Durkin makes the guy so interesting. His timing would make a Swiss watchmaker jealous, and he seems to imbue most of his lines with multiple layers of meaning. Watching him work is one of the production’s great pleasures.

...the play (which ran 2 ½ hours on opening night) needs tightening... On the plus side, the playwright gives each character a showcase scene or two, so the audience comes to know and care about all of them.

Just the second production from Zoetic Stage, Captiva underscores the arrival of a company that promises to enrich South Florida’s regional theater scene. With Demos-Brown and his creative collaborators on board, how could it not?

Zoetic Stage presents Captiva at the Adrienne Arsht Center for the Performing Arts through November 20, 2011.
Posted by C.L.J.