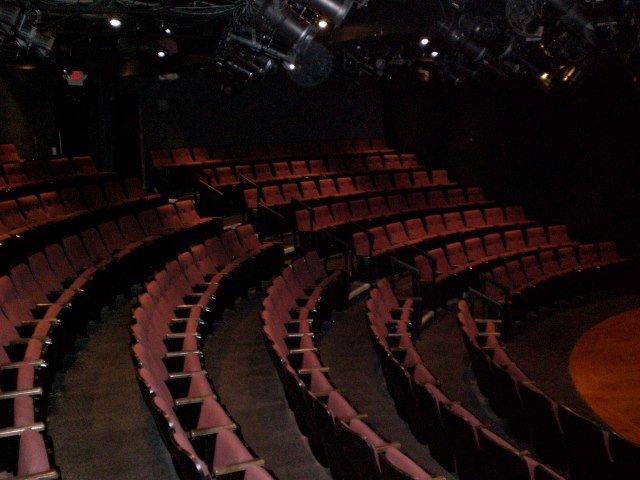 It was actually a slow week for theatre stories in South Florida; not to say that nothing's going on; we'll probably see a lot in the next few days.

Today's 'dark' theatre is The Plaza Theatre in Manalapan.  Originally a gourmet grocery store, the Theatre Club of the Palm Beaches converted it to an intimate venue with help from Lois Pope.  Shortly after opening their new space, the company renamed itself The Lois Pope Theatre in her honor.  But when Pope insisted on a more involved role in programming, the benefactor and the theatre company went their separate ways, and the company re-branded as Florida Stage.  When they moved to Kravis Center to cut operating costs, a lot of us wondered what the future held for this theatre located in prime retail space.  Then Alan Jacobson adopted the space last year, bringing theatre back to A1A and Ocean Boulevard.

It's Not Just For Kids Anymore...
Social Miami talks with Diana Garle, who will be appearing in Chekov's Three Sisters at Miami Theater Center, formerly The Playground Theater. The production marks the launch of the company's adult, um, non-children's, programming.

Speaking of Launches
BroadwayWorld reports that Outré Theatre Company has cast their first full production.  The fledgling company opens Andrew Lippa's The Wild Party on November 23 at the Mizner Park Cultural Center.  That's the same venue used by Parade Productions, and marks a trend towards sharing spaces that includes Boca Raton Theatre Guild and The Womens' Theatre Project (who share The Willow Theater), as well as all those companies that work out of tiny Empire Stage.

Round Up
The Miami Herald stuck a headline about PBS and MOCA over this round up, but the article reminds us that The Naked Stage has a show opening next week, and their 24 Hour Theatre Festival follows on November 12.  Also, playwright Nathan Englander is in town, and Blue Plate Special: Episode 41 at Broward College.

Speaking of Naked Stage...
The Naked Stage blogs about its upcoming production of A Man Puts On A Play and this year's iteration of The 24 Hour Theater Festival.

Oh Yeah, Theaters and Titles and Deeds
Of course, the biggest story last week was the auction of the Caldwell Theatre Company's home and the word that the company really is dead.  Read our recap of Caldwell stories to find links those articles, as well as our recap on The Hollywood Playhouse.

Looking to the Future
The Miami Herald reports that the winner of a $20k grant from the John S. and James L. Knight Foundation will be decided by the public. Among the five finalists: The Arts Garage, which is home to Louis Tyrell's latest theatre venture.

Oops, You Missed It
Zoetic Stage's critically acclaimed production of I Am My Own Wife closed on Sunday, but you can get a taste of Tom Wahl's tour-de-force performance on WLRN's website.  It's  shame you missed it - it was excellent on every level.  Bill Hirschman was moved to say that it should win the Carbonell for "Best Ensemble."  High praise indeed for a one-man show.

Something New
When the Broward Center for the Performing Arts opens its renovated Au-Rene Theater with the Miami City Ballet this week, they'll be unveiling their new Club Level.
Posted by C.L.J.