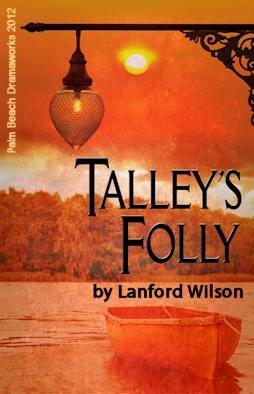 
In this beautifully wrought Pulitzer Prize-winning "no-holds-barred romantic story," two mismatched, wounded souls open up to each other and grab their last chance at love.

Set in 1944 in Lebanon, Missouri, Talley’s Folly is part of the trilogy of Talley plays that also includes Fifth of July and Talley & Son.

Hap Erstein included it in a meta-review for Palm Beach Artspaper:

Palm Beach Dramaworks prides itself on serving up “theater to think about.” True, there are plenty of heady plays on its schedule this season, but it begins instead with Lanford Wilson’s Talley’s Folly, a charming two-character romance from 1979, more like “theater to sigh over with a constant smile on your face.”

...director J. Barry Lewis orchestrates this awkward two-step with heart-on-the-sleeve romanticism, a task made easier by the talents of company veteran Erin Joy Schmidt (Dinner With Friends) and New York actor Brian Wallace in his area debut. Schmidt has the more subdued assignment, taking Sally through a box step of emotions from anger to vulnerability, and back up to rage before arriving at acceptance. Wallace gets the showier role, constantly reaching into a bag of tricks to amuse, distract and persuade Sally, all the time barely concealing his own anxieties. Together they have that essential, indefinable quality known as chemistry.

As usual, resident scenic designer Michael Amico all but steals the show with his atmosphere-rich, dilapidated boathouse ― the “folly” of the play’s title ― where love first blossomed for Matt and Sally a year earlier. Ron Burns lights it expertly, charting the evening’s many moods and Brian O’Keefe costumes the two actors in simple, character-revealing period clothes.


Dramaworks’ new production of Talley’s Folly, now launching the company’s second season in its larger yet still intimate home on Clematis Street in West Palm Beach, is a perfect example of what this theater does so well.

Both deliver energetic, layered performances under the skillful direction of J. Barry Lewis. Wallace finds the funny, driven exterior of a man who has lost everything but itsn’t about to let his unexpected chance at happiness slip away. Schmidt, though outfitted in a particularly unfortunate print dress by costume designer Brian O’Keefe, makes quicksilver shifts from discomfort to anger to glimmering thoughts of what “yes” might mean.


In this delightful production, everything does go well as Palm Beach Dramaworks presents a thoroughly enjoyable and dramatically rich interpretation of Wilson's tender, romantic story about two lonely people and the boathouse that brings them together.

The play is magical in so many ways, and director J. Barry Lewis allows the lyrical beauty of the author's words to weave their spell. It starts with the monologue, which breaks theater's fourth wall as Matt speaks directly to the audience pointing out the set pieces, making note of the "footlights," basically informing us that we are about to see a play. As Sally (Erin Joy Schmidt) nears the boathouse, she's calling Matt's name — the lights dim and when they come up, the play begins. Magic.

Wallace is charming as Matt. It's enthralling to see the actor inhabit this spirited character — nosily examining every inch of the rickety boathouse, beautifully rendered by scenic designer Michael Amico.

Schmidt has a balancing act as Sally. In lesser hands Sally could end up as a supporting character to the Wilson's more robust Matt, but Schmidt understands the idea of completing the picture that Wilson wants to create of this couple, so she works hard at keeping Sally on equal footing.


...Talley’s Folly doesn’t ask you to turn off your brain even as it embraces you with an enchanting pas de deux of emotions, at least in Palm Beach Dramaworks’ charming seduction starring Brian Wallace, Erin Joy Schmidt and the crucial third leg of the stool, director J. Barry Lewis.

We’ll praise the actors soon enough, but first acknowledge how expertly and invisibly that Lewis has helmed this piece. Once again, Dramaworks’ resident director has broken down the script moment by moment, helped his actors analyze every beat and then reassembled it with a marvelous pacing crucial to an intermissionless evening.

Wallace, a Jacksonville native who works up and down the East Coast, is mesmerizing as Matt, a man whose affability instantly wins over the audience by deploying a gentle and self-deprecating humor with a quick-witted and nimble patter.

Schmidt, with Lewis’ guidance, only allows Sally to melt by millimeters.  It is only when she is facing away from him that we occasionally see her yearning seep out through watery eyes... Schmidt creates a independent-minded Sally that any man would be a fool not to fall in love with.

Set designer Michael Amico, lighting designer Ron Burns and sound designer Matt Corey have outdone themselves by creating an atmosphere that is both refuge and crucible.

Leslie Gray Streeter wrote for the Palm Beach Post; either she lost her program, or an editor "corrected" it, but either way Erin Joy Schmidt's name is spelled wrong:

Over the approximately 90-minute proceedings, director J. Barry Lewis guides his two leads through what becomes one extended conversation about expectation, disappointment and the folly of hope, the whole of which takes place in that crumbling, once-grand structure.

Both Wallace and Smith (sic) adapt well to the physical constrictions of the play - watching a 90-minute real-time conversation might be incredibly tedious if you weren’t interested in both the conversants and the conversation. Wallace sells Friedman’s romanticism by selling the back story that grounds him, while Smith (sic) inhabits a woman who is at once prematurely embittered and girlishly hesitant.

Of course, we suppose it's possible that Ms. Schmidt as an understudy named "Erin Jo Smith," but we doubt it.  Far more likely this is just another entry in the long list of reasons people are no longer reading the Post.