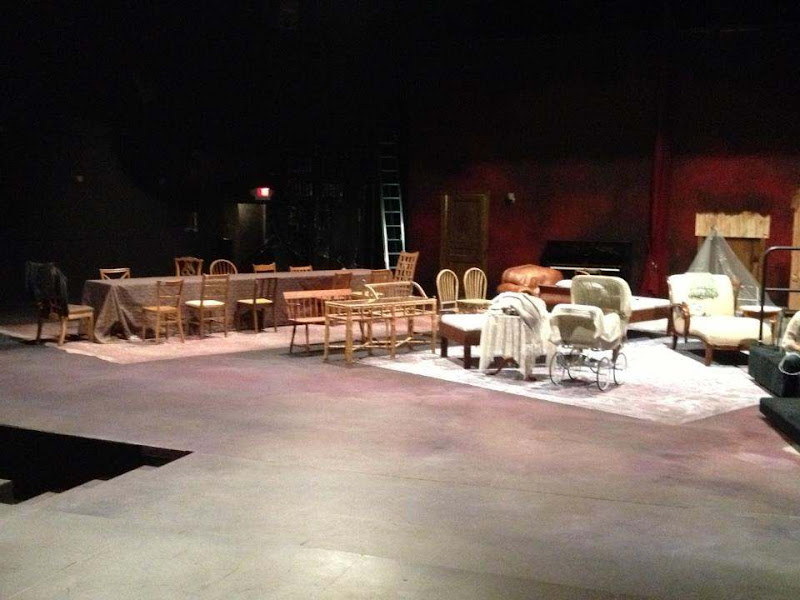 We've had a lovely break in the weather over the weekend, and now the weather's breaking bad all over the northeast.  We hope that Hurricane Frankenstorm Sandy diminishes before landing; but keep our friends and families living in the storm's path in your thoughts and prayers.

Today's "dark" theatre is Miami Theater Center.  This is the set for their upcoming production of Chekov's Three Sisters.  This company recently rebranded itself after building a reputation for opulent children's theatre productions as The Playground Theater.  In days of yore, this was the Shores Performing Arts Theatre, which brought us such productions as The Rocky Horror Show, Chaplin, Bat Boy the Musical, and Blood Brothers, among many others.

Holiday Programming
The Drama Queen notes that two different area companies are catering to the Halloween enthusiasts with productions of The Rocky Horror Show.  And a hometown couple returns to teach us what they learned as cast members of In The Heights.

Speaking of Halloween
The Broward/Palm Beach New Times sits down with Jim Hammond of The Puppet Network to talk about his Day of the Dead project in Fort Lauderdale.

They're Back
BroadwayWorld brings us up to date on The Women's Theatre Project, which will be opening DelVal Divas this week at their new venue, the Willow Theater in Sugar Sands Park.

Arsht Sponsors Collaboration
The Miami New Times fills us in on Girls Vs. Boys, a collaboration of The House Theatre of Chicago and the theatre department of the University of Miami that opens this week at the Adrienne Arsht Center.


Writers Chris Mathews, Jake Minton, and Nathan Allen tested Girls vs. Boys at Northwestern University as they wrote the story, culminating in a 2010 workshop production of the musical in Chicago. But they thought it still needed some tweaking, so when the Arsht asked to restage Girls vs. Boys this season with the University of Miami's Department of Theatre Arts, they saw it as a chance to finally put on the finishing touches.

About Those Tickets
We caught the story on NPR last week, and then someone asked us about it, so we thought we'd point to this great article on The Next Web about Louis C.K.'s fight against ticket prices being driven up by excessive fees - and scalpers.  And remember; if you bought your tickets to see Louis C.K.'s shows at the Broward Center from any other source than Louis' website, you've probably just been ripped off.