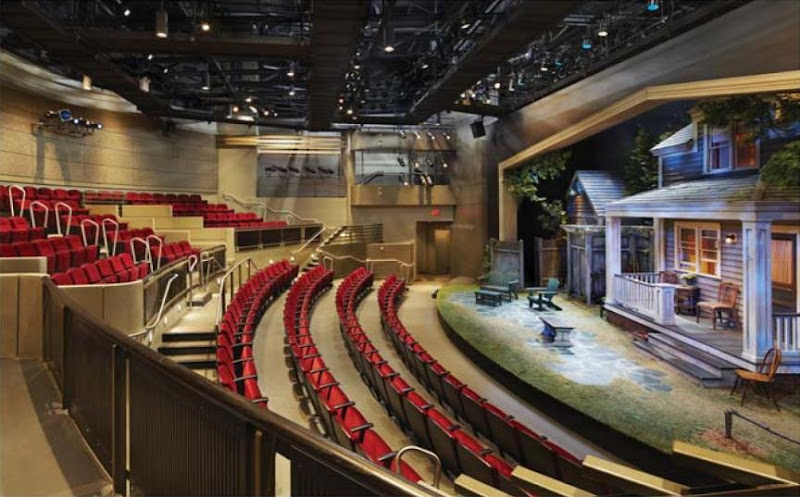 It's already November, and the theatre season is in full swing in South Florida.  The critics are running themselves ragged trying to get all the shows reviewed.

This week's "dark" theatre is Palm Beach Dramaworks.  This was originally a movie theater that opened at the end of the 1940's. It was first converted to a live production house in the 1980's as The Stage Company.  It was a minimal renovation that entailed putting a stage at the front of the auditorium, and hanging a few pipes from the ceiling for lights and scenery - they didn't even build a prosenium.  Florida Rep took over the space with nothing more than a new sign over the door.  After that company folded, the Burt Reynolds Institute for Theatre Training gutted it to do a real conversion.  That company folded after one production, and it more or less sat empty until it reopened as the Cuillio Center.  A few years later, the theatre was again dark until the City of West Palm Beach worked out a deal to renovate it completely for Palm Beach Dramaworks.

Don't forget, Election Day is this week; be sure to vote.  Remember that PBS's entire yearly budget costs the same as only four surface-to-air missiles.

If it's Theatre Season, That Means...
..that it's time for Palm Beach Dramaworks' Master Playwrights Series to begin!  BroadwayWorld tells us about it.

The Age Old Question
The Miami Herald speaks with several local theatre companies about strategies for bringing in new patrons - a younger demographic.

While We're Waiting...
...for the reviews to come out, you can read up on The Women's Theatre Project on BroadwayWorld.  The company returned from its hiatus with The Delval Divas over the weekend.

Investment in Arts Pays Off
The South Florida Business Journal reports that Broward County arts groups contribute millions of dollars to the economy:


The study, whose findings were presented at the event by Randy Cohen, vice president of research and policy at the Washington, D.C.-based Americans for the Arts, also found that nonprofit arts-related organizations funded 6,402 full-time jobs in Broward and generated $22 million in local and state government-related revenue.


Palm Beach County nonprofit cultural organizations and their audiences spent nearly $250 million in 2010, according to the report, and supported the equivalent of 5,782 full-time jobs. That’s up from $209 million spent in 2005 and 4,812 jobs generated.

So next time someone questions why we're funding arts groups, you know the answer; because the dividends are great.

A Family Puts On A Show
The Miami New Times looks into "the hectic lives of Antonio and Katie Amadeo."  They are the force behind The Naked Stage.


... this month is a typical one for the Ama­deos: a world-premiere play, a sleepless fundraiser, and a sleepless baby. "I thought the 24-Hour Theatre Project was difficult last year when I was pregnant with a broken wrist," Katie says. "But it's a piece of cake compared to doing it with a 10-month-old baby and a husband in rehearsals. I don't know what kind of maniacs we are to attempt this."

You're the kind of maniacs we love, Katie.

The Elephants in the House
No, we're not talking about Congress.  Butts in Seats finds that patrons remember unpleasant experiences for a long, long time.


... I received an email from a patron stating the last time she attended she had an unpleasant experience due to people being allowed to be loudly interactive with the performers. Because she did not want to chance another bad experience, she wouldn’t be attending our performances any time soon.

I looked up her purchase records to try to discern what show might have offended her and found that our last attendance record is 4 years old. ..

Take Care of the Fundraisers
The Chronicle of Philanthropy outlines how to lose your development director.  Not that anyone sets out to do this on purpose, but it's funny how often they do it.


On Sept. 28, the NLRB issued a consolidated complaint that combines a $2.6 million order for back pay and benefits contributions, plus interest, in a case the Kravis lost in a federal appeals court ruling in December 2008; a second complaint issued in July accusing the Kravis of acting illegally when it declared an impasse in fall 2010 and imposed the terms of its “final offer” in January 2011; and elements of a third charge the union filed in April.

Meanwhile...
...in Palm Beach, the Royal Poinciana Playhouse is still closed.  The Shiny Sheet reports that the Theatre Guild is hosting a forum on the matter on November 13.  We have to note that not a single South Florida theatre professional will be on that panel; they're flying in some strangers from Massachusetts. Meanwhile, a one-time supporter of the cause speaks out.
Posted by C.L.J.