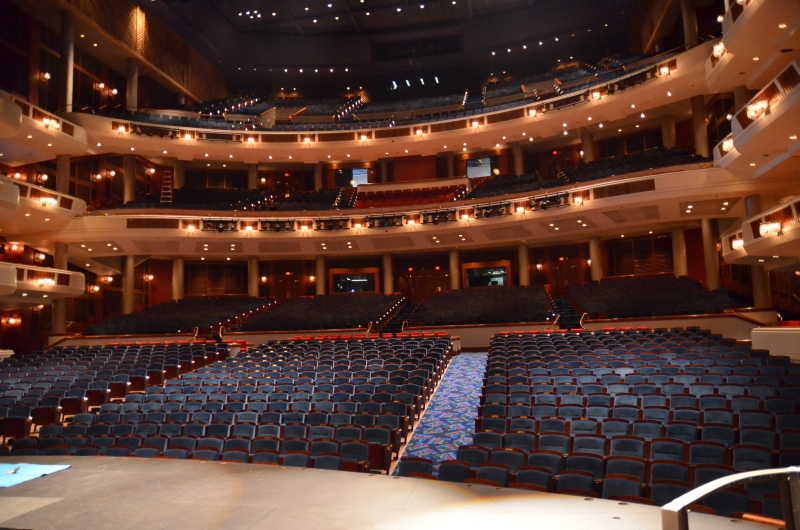 This Monday isn't as dark as most; tonight is the culmination of the 24 Hour Theater Project. Last night, the playwrights selected the theme of the play they would write.  By the time this article posts, they should be turning over a complete script to their directors for production and rehearsal.  The curtain goes up tonight at 8pm at GableStage.

Today's dark theater is a repeat; it is the newly renovated Au-Rene Theater at the Broward Center for the Performing Arts.  We last saw it September 10, while it was in mid-renovation.  Now it's open to rave reviews.  You're looking at 2,660 brand new seats, new theater lighting, an orchestra pit/thrust lift, and the Club Level Lounge in the middle of the Mezzanine.  You can't see the audio enhancements; you'll have to come out and experience them.

Club Level A Hit
While it's a bit of a trick to sort out what's article and what's advertising, The Examiner has nothing but positive things to say about the new Club Level at the Broward Center for the Performing Arts.

Private boxes have always been a huge sell for the arts, opera, theatre and concerts. Broward Center for the Performing Arts is cashing in on that idea but taking it to the next level, like many profit making sports arenas. Club Level opens 60 minutes prior to curtain, throughout the performance and for 45 minutes after the final bow, allowing guests to relax, linger and chat after the show. Enjoy a night cap, evening coffee, dessert and maybe a star two will make a VIP Club Level back stage appearance. This truly is a one of a kind VIP experience.

There are also sentences in quotations attributed to "Broadway Global" that take you to a web page that doesn't have any material to quote.  Very strange.  Anywho, the article includes a slideshow of the Club Level, with at least two photos of the complimentary ceviche they serve up there.  Yum!

Enter Stage Left
The Palm Beach Post reports that Boynton Beach just approved a plan that would allow a theatre to operate out of the city's Madsen Center.  Stage Left Theatre, formerly the Royal Playhouse, would produce 5 shows a year.

Enter the Center
The Playground Theatre has grown from a quality children's theatre operation into the Miami Theater Center, a multifaceted organization that kicks off with their own original adaptation Chekov's The Three Sisters.  The Miami Herald talks with Stephanie Ansin, the company's founder, as well as several actors involved with the production.  And there's an interesting difference in perception between Ansin and Howard Elfman, a local actor working at MTC for the first time:

“This is the fastest we’ve created a show,” says Ansin, the adaptation’s coauthor and director.

“It’s incredible. I’ve never rehearsed this long, ever,” says Elfman. “They have a different process here, involving some physical training, some improvising. … Normally, you get 2 1/2 weeks of rehearsal. Some details don’t even register until the end of a show’s run.”

MTC does spend a luxurious amount of time on their productions; a practice common in Europe, but almost unheard of in American regional theatre.

Florida Theatre On Stage starts off by discussing the innovative staging of The Three Sisters:

What will likely have people talking as they walk into the Miami Theater Center this weekend for its new adaptation of Chekhov’s Three Sisters is where they’ll sit: a black riser taking up a third of the stage itself.

What will likely result in squeals of surprise is how, between scenes in the four-act play, the riser will pivot with the audience still in their seats to face a different part of the set

All's Right at the Colony
The Examiner reports that Avery Sommers will be kicking off the cabaret season at The Colony Hotel's posh Royal Room Cabaret in toney Palm Beach.

Will the Flop Flip?
The Palm Beach Post takes a look at Catch Me If You Can, the musical adaptation of the Spielberg film that flopped on Broadway.  The creative team re-tooled the show for the national tour, which stops at the beleagueredKravis Center this week.

Am-Dram steps up in UK
The Independent reports that some British community theatre groups are giving professional companies a run for their money.

There are more than 2,500 such groups in the UK, putting on a staggering 30,000 productions every year. That's no niche interest; that's a huge swell of creative endeavour, important to people from all walks of life.

Perspective
Butts in Seats has a perspective of last week's elections that any producer would envy:

Now that the election is drawing to a close, I think all non-profit arts organizations, especially those in battleground states, should go out tomorrow and ask media companies for donations. There has been so much money spent on advertising during the campaigns, those companies are going to have a big tax burden this year if they don’t find some worthy cause to donate to!

A Look Back
The Minnesota Playlist was also moved to reflection by the recent election, and recalls the Federal Theatre Project:

A generation of actors, directors, writers, composers and designers got their start with the FTP - Orson Welles, John Huston, Joseph Cotten, Arlene Francis, Will Geer, Canada Lee, Virgil Thomson and George Izenor among them.

Government can indeed create jobs, and those who hold them can go on to influence a generation.

Meanwhile...
...in Palm Beach, the Royal Poinciana Playhouse is still closed, and the Palm Beach Daily News says it's time for the town council to take stand.

All that should come to an end Thursday when the council - at the behest of member Bill Diamond - is scheduled to finally answer the question that seems to be on the minds of everybody interested in the theater: Does the agreement require the plaza’s management to lease and maintain the Playhouse as a theater, or does it mean the Playhouse’s only permitted use is as a theater but doesn’t bar leaving it vacant?

It’s a question that should have been answered a long time ago...

We can only point out that there's not a lot of point to having a vacant theatre; empty theatres do not draw audiences, and thus do not boost the economy.  The PB Theatre Guild wants to lease the space; let them prove that they can make it work, or let them try and fail.
Posted by C.L.J.