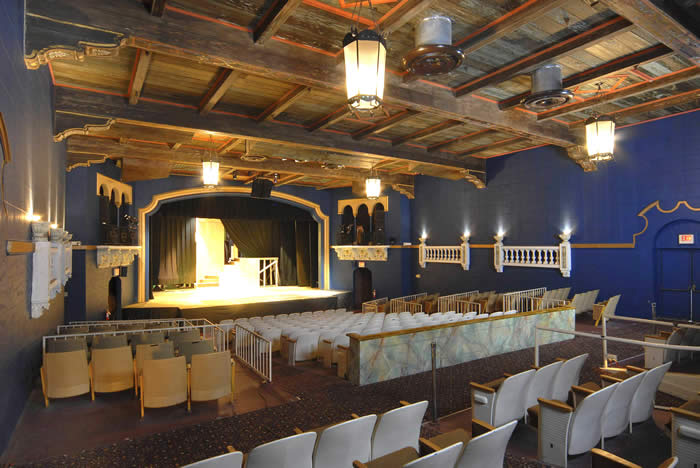 This theatre season is racing by - it's already Thanksgiving!  And yes, there will be shows this coming weekend, so The Scene will be out on schedule.

This week's "dark" theater is the venerable Lake Worth Playhouse.  While not the oldest community theatre group in South Florida - or even in Palm Beach County -their home is " the oldest building on the register of the Art Deco Society of Palm Beach County."  They do an amazing array of work; in addition to the usual community theatre fare, they have a black box studio in an adjacent building where they produce edgier work.

Exiting the Stage
Last week's big news was sad; Don "Bunny" McArt, actor and brother of impressario Jan McArt, passed away.  Florida Theater On Stage traced his career back to his debut in 1943, The Miami Herald included some personal reminisces from his sister, Jan, and The Palm Beach ArtsPaper spoke with Rupert Holmes, who wrote the last play McArt performed, Say Goodnight, Gracie, the one-man biography of George Burns.  But it was The Boca Raton Tribune that posted the most extensive review; McArt had spent the last few decades as a resident of Boca Raton.

News Roundup
Florida Theater On Stage tells us why Stage Door's production of Six Dance Lessons in Six Weeks was pushed back a week, and that the staged reading of Christopher Demos Brown's Our Lady of Allapattah at GableStage will occur Tuesday instead of tonight.

The Miami Herald also mentions the reading of Our Lady of Allapattah, which is being produced by Zoetic Stage.

They Brought Down The House For Nutcracker
BroadwayWorld fills us in on THE NUTCRACKER, A MAGICAL NEW PLAY.  It's another invention of Chicago's House Theatre, presented in partnership with The Adrienne Arsht Center for the Performing Arts.  The production includes local favorites Renata Easltick and Mary Sansone in featured roles, and Anne Chamberlain and Mark Della Ventura in the ensemble. And it's NOT a BALLET.  There may be sugar-plu fairies, but it's a fair bet they won't be on pointe.

Much Ado about a Miami playwright
Miamian Tarrel Alvin Mcraney has been mentioned a few times in the last month or so, but we've been remiss in reporting those stories. The Drama Queen reported that his Choir Boy was a hit in London, and that we can look forward to his take on Hamlet at Gablestage this January.  Florida Theatre On Stage reports that he will have his adaptation of Shakespeare's Anthony and Cleopatra produced at GableStage NEXT January. Now TheaterMania reports that The Public Theatre and The Royal Shakespeare Company are collaborating with Gablestage to present Anthony and Cleopatra at Stratford-upon-Avon before it plays Coral Gables.

The Future of Arts Marketing
Well, maybe.  Mission Paradox takes a look at a new approach to marketing being taken by Coca-Cola that may be worth considering.