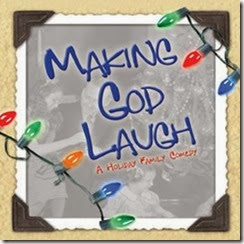 Actors’ Playhouse opened its production of Making God Laugh at The Miracle Theater on December 4, 2013.

Sean Grennan's new comedy follows one typical American family over the course of thirty years worth of Holidays: Thanksgiving, Christmas, New Years and Easter, as we learn that despite what we all may have in mind for our lives, we often arrive at very unexpected destinations. As Woody Allen once said, "If you want to make God laugh, tell him your plans". Making God Laugh is that rare play that manages to be absolutely genuine, deeply moving and unbelievably funny all at the same time.

If casting is half the battle in crafting an effective production, director David Arisco has surrounded himself with terrific actors…

Part of the fun of Making God Laugh is the way it walks theatergoers down memory lane via Ellis Tillman’s era-evocative costumes, Gene Seyffer’s rendering of the parents’ home with its floral wallpaper, Luke Klingberg’s effective lighting and Elmo E. Lanclos III’s sound design, which bridges scenes with once-huge hits and memorable news reports.
But what makes the play much more than the goofy comedy it initially seems to be is the skillful, detailed way that five fine actors take the audience on a journey through the evolution and aging of a family. Thanks to Radosh, Haig, Weiner, Sherman and Focas, Making God Laugh is funny, moving and genuinely resonant.

Making God Laugh may not be Eugene O’Neill or even first-rate Neil Simon, but it is undeniably effective and affecting as well as quite funny – the kind of evening in which you nudge your seatmate knowingly at a shared recollection of some familiar family folly like the offhandedly judgmental mother.

The reason these less-than-subtle proceedings work so well here – the broad comedy and the touching drama – is they’re delivered by some of the best actors in the region led by artistic director David Arisco who sets the evolving tone in each successive scene.

Sherman, who has been sorely missed while she took some time off, roars back into her role as the disaffected daughter. Her Maddie growls, grimaces, glowers, gloats and pouts at Richard’s jibes and her mother’s slights… What Sherman achieves beautifully, as Grennan must have wanted, is to show that if Maddie’s dream did not come true, she always had within her the potential for greatness in that field. Poignant, indeed.

Radosh, who has had an amazing run of performances over the past couple of years, has the best-written role but it still is a challenge. Radosh conquers it by totally inhabiting her character, never stooping for laughs.

Haig has the least to work with in the script, but he’s a veteran actor who knows how to convincingly portray a husband thoroughly in love with his prickly wife.

Weiner has done comedy often, but people think of him more for his dramatic work at GableStage. So this serves as a solid reminder that his toolbox is deep and wide…

A final nod for costumer Ellis Tillman who has been having a few terrific seasons here and at GableStage. He is tasked more than anyone with charting the changing decades and he has captured the evolving styles with note perfect outfits that are a witty commentary in themselves on transitory fashion.

Sit com? Soap opera? Touches of both abound, but what saves this piece is the acting. Angie Radosh is going to do something wicked, she knows it and she loves it and you can see it in her eyes. Peter Haig will do anything to keep Ruthie's love, he's happy to be her carpet but keeps his love for his daughter foremost. Gregg Weiner has the bluff heartiness of the loser who cannot show regret. Deborah Sherman steals scenes just by being there. Fortunate that her fellow actors are such that this is not a hanging offense. She can be so far over the top all you can see are the soles of her shoes but in an instant she'll break your heart with one silent stare. And Michael Focas, with the least showy role, is entirely believable as the priest who finds the flaw in religion.
Well directed by David Arisco, this piece by Sean Grennan is well served by the costuming of Ellis Tillman, and the, as usual, fine set by Gene Seyfer, with lights by Luke Klingberg and sound by Elmo E. Lanclos 111.

…in Actors' Playhouse's production of Making God Laugh — thanks to the direction and a quintet of uniformly superb performances — each of these frozen fantasies becomes a snapshot of the characters' emotional states at the time of the photograph. The hurt and the longing show through, defiant and truthful, so that we can, perhaps, peer into their souls.

This production is a triumph for Actors' Playhouse….

These characters' evolutions are marvelous to watch, thanks to performances that are rife with poise, subtlety, and intelligence. Weiner is terrific at portraying an uncouth slob, but he's even better at revealing his character's sensitivities — the vulnerabilities masked by his putdowns. Sherman is so real in this part it's frightening, from her first appearance as a 20-something rocker to her powerful recitation of a Shakespeare monologue in the final scene. Haig has the yeoman's job of making three-dimensional a character who so often blends into the background as an amiable peacemaker, but he delivers what might be the play's most emotionally stirring catharsis.
And Radosh, channeling the sort of deluded turmoil she brought to her performances of Tennessee Williams plays at New Theatre, is once again a master class in and of herself. Watch her just be in the play's most affecting scene, where she becomes a marginalized figurehead in the family and ultimately earns our pity. The color drains from her face, and she's as white as a ghost and as limp as a deflated punching bag.