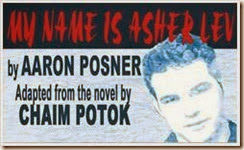 Gablestage opened its production of My Name Is Asher Lev on November 23, 2013.

This huge hit, still running Off-Broadway, tells the powerful story of a young student in post-WWII Brooklyn who is torn between his Hasidic upbringing and the desperate need to fulfill his artistic promise ~ against the will of family, community and tradition. A stirring adaptation of a modern classic, it presents a heartbreaking and triumphant vision of what it means to be an artist.

…those who don’t know much about the Hasidic Jewish community in Brooklyn in the 1950s may be a bit baffled by GableStage’s new production of My Name Is Asher Lev, not because of anything director Joseph Adler or his talented cast have done but because the play itself doesn’t make that involving, transcendent leap.

In the GableStage production, Hoffman gets to demonstrate his versatility as he plays the unyielding Aryeh, Aryeh’s warmer brother, the elderly Rebbe and the outspoken Jacob Kahn, a non-observant Jew who becomes Asher’s artistic mentor. The actor uses a number of Hebrew words and phrases, only some of which are clear in context (the repeated Ribbono shel Oylom is not). Turnbull has a brief turn as a nude model and a far more interesting one as Anna Schaeffer, a gallery owner who becomes Asher’s enthusiastic dealer. As Rivkeh, she is somewhat constrained by the way the character is written, fussing and mourning and worrying as Rivkeh tries unsuccessfully to please her judgmental husband and headstrong son.

Except when he’s playing Asher as a child, BenShlomo paints a portrait of a tightly wound artist, an observant Jew determined to follow the dictates of his “gift” no matter what the cost. Feeling empathy for this Asher, in the face of his emotional coolness and hurtful behavior, becomes difficult. Nor does it help that, despite all the talk of his genius and controversial subject matter, none of the character’s art makes an appearance in the play.

Like walking toward a great work of art at the end of a hallway, the magnificence of GableStage’s production of My Name Is Asher Lev grows slowly as you approach it, as you spend time with it, delving deeper until the accumulated detail of its brushstrokes reveals its full splendor.

…director Joseph Adler and a trio of actors — Avi Hoffman at the top of his game, Laura Turnbull and a revelatory performance by young Etai BenShlomo – elevate the raw material into a night that audiences will talk about several seasons hence.

As usual, GableStage’s reliable roster of designers deliver an evocative environment that is essential but never calls attention to itself.

I celebrate no particular deity although I understand the need. Which means I watched My Name is Asher Lev at GableStage with less enthusiasm than 95% of the audience... And this raises the question: should a piece be critiqued solely as it stands for a particular sector of society or should the ramifications of its appeal to a broader audience determine its worth?

Etai Benshlomo, Avi Hoffman and Laura Turnbull are three terrific actors and they are at their best in this tale of parental disapproval in an Hasidic Jewish family.

The play's structure and its insularity aside, My Name is Asher Lev is typical of GableStage productions: excellent.

It is an empowering idea for an Hasidic Jew struggling with the conflict between the faith he was brought up in and the artwork which pours out of him and offends his parents and the orthodox community.

Those seemingly polar opposites of art and religion are at the core of Chaim Potok’s 1972 novel, My Name is Asher Lev, adapted for the stage by Aaron Posner and now receiving an evocative production at GableStage. It is easy to see why this spare, but potent play became an off-Broadway hit, steeped in the struggles of a young man blessed — or cursed — with a gift for drawing.

The play’s success rests on the shoulders of the actor playing Asher, and BenShlomo handles the assignment with assurance.

Hoffman is aptly stern and unbending, yet loving as Aryeh and, in contrast, passionate and ebullient as Kahn, Asher’s surrogate father. Rivkeh could get lost in the war of wills between father and son, but Turnbull manages to leave her mark on the production as a woman caught in the crossfire.

Joseph Adler directs the play’s Southeastern premiere with a gentle touch, knowing that the familial emotions are so potent they need no underlining. My Name is Asher Lev may be steeped in Judaism, but its personal drama brims with universality.

My Name is Asher Lev plays at GableStage through December 22, 2013.