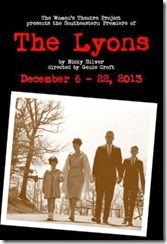 The Women’s Theatre Project opened its production of The Lyons at the Willow Theatre on December 6, 2013.

THE LYONS is an outrageously funny Broadway hit about Rita Lyons and her family trying to find a human connection in a most unusual reunion,  as secrets are revealed and accusations are made.
"Hilariously frank, clear-sighted, compassionate and forgiving..." -  NY Times
"Smart and funny and moving." -NY Observer
"...a funny, furious little tale of family annihilation with honesty, savagery, and humanity..." - NY Magazine

…Silver’s wickedly hilarious satire about self-centered souls, on display at The Women’s Theatre Project, hides a deeper portrait of wounded people still seeking the affirmation that they never got from the people who society says should have been their primary nurturers.

Croft has elicited pitch perfect performances out of her cast and encouraged them to dive into the caustic darkness without flinching. She prevents them from becoming cartoon caricatures we can’t care for; they may be comic figures, but they’re multi-dimensional.

Leading the pack is Jessica K. Peterson who played a troubled mother this season in Brighton Beach Memoirs. But that role didn’t pose the challenge that she triumphs over here in her portrayal of Rita, a woman who has already moved past her marriage even though her husband still breathes… Peterson makes credible the crux of why Rita stayed with Ben for 40 years when she never ever loved him.

Kevin Reilley gives one of his best performances as the toxic curmudgeon, a grizzled burned-out crabapple.

As the walking wounded siblings, Jacqueline Laggy is a wonderfully woebegone daughter whining about her parents’ neglect, and Matthew Korinko delivers her brother as a man never comfortable in his own skin.

If you are in tune with Silver’s sense of humor, all of this is terribly funny, but these are downright horrid people. That may explain why this 2011-2012 play was a critical success in New York with a bravura performance by Linda Lavin as Rita, but has played only a handful of times in regional theaters since then.
Not for everyone, certainly, The Women’s Theatre Project delivers a tasty cup of holiday eggnog laced with arsenic.

In Nicky Silver's The Lyons, comedy and tragedy are as inextricably linked as the two heads of conjoined twins; where one turns, the other follows. There is no joke that isn't soaked in hurtful battery acid, and rare is the moment of unabashed sorrow that isn't tempered with an acrid laugh line.

…the Women's Theatre Project struggles to bring fluidity to the playwright's unorthodox choices. There is much to be admired about the cast, especially from Cartland, who displays a heretofore unseen intensity in his small supporting role, and Korinko and Laggy, who help create the only characters in the show who are genuinely worth caring for. Reilly accurately conveys the gesticulations of a dying man — wheezing, sighing, groaning, clutching his body in discomfort. But while Peterson relentlessly inhabits an archetypal character — the meddlesome Jewish mother — she does so to a fault. Aside from one isolated scene, she lacks the soft edges necessary to temper her character's abrasiveness, and she's so loud and rough that when her character finally exits the stage, it becomes a more breathable place.
Such heaviness dilutes the short-lived charms of The Lyons, leaving us with a dark comedy that is too much dark and not enough comedy.

The Women’s Theatre Project presents The Lyons at the Willow Theatre in Sugar Sands Park through December 22, 2013.