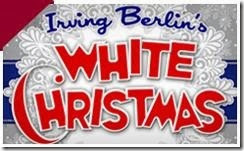 The Wick Theatre opened their sophomore production of White Christmas on November 14, 2013.

(sorry – no blurb from The Wick, because apparently they are assuming that you’ll know what this production is.)

The success of this work, like the movie, depends on a quartet of lead actor/singers who effortlessly exude a personality that would enchant the stoniest heart. In that, director Stephens has perfectly cast his two sets of lovers, from the square-jawed charmer Cichewicz and loose-limbed whimsical Starnes to the lovely if skeptical Shook and, best of all, the effervescent Kleiner.

…the most crowd-pleasing performance is McArdle as a fifty-something Broadway almost-star now incognito keeping the inn running despite a mountain of bills among other headaches. She unleashes a Merman belt on the song “Let Me Sing and I’m Happy” and a host of whipcrack wisecracks that sound like Thelma Ritter come back to life.

Stephens’ direction is smooth and nearly invisible. He and choreographer Wendy Hall use the aisles and even the top of the low wall in front of the loge as performing space.  Musical director Michael Ursua guided the cast  through the iconic numbers making them sound both fresh and familiar at the same time.

Once again, the orchestra is digital but the Wick’s refurbished sound system and the quality of the “performance”  of  Lance Blank’s orchestrations provides a lush razzamatazz sound that makes the fiscally-sensible choice almost forgivable. A couple of singers actually weren’t in perfect sync with the tempo of the tracks and it wasn’t intentionally alternative phrasing. And on some the tracks, you might think you hear a singer’s voice faintly like an echo.

In the end, literally and figuratively, White Christmas is a “forget your troubles, c’mon get happy” production whose finale should melt not just snow but ice-cold hearts.

There are two words to sum up the Wick's White Christmas – Holiday Extravaganza. With director Stacey Stephens' romantic vision, Wendy Hall's inspired choreography, costumes that rival Radio City, and a talented cast, the show is a gift to South Florida. Take advantage of this delightful holiday goodie.

What the Wick's production captures in perfect effect is playing the production in "real time." And it was necessary to have a strong cast and the right resources to execute director Stephens’ notion of honoring the era true to its day. Audiences shouldn’t feel as if they are watching a tribute to White Christmas, but instead should be transported into the period as if it were the present.

James Cichewicz… ends up making this Wallace’s story. He’s a triple threat actor – he can sing, dance, act and he commands the stage. His rendition of Blue Skies is a beautiful keeper. Kelly Shook as Betty Haynes brings on the heartbreak in her torch song Love, You Didn’t Do Right By Me. It’s a moment that you wish could be frozen in time. Cannon Starnes… adds a manic sense of comedy to the role of the ladies’ man of the duo. It’s a good approach as it creates levity in places where the book starts to lag.

Julie Kleiner as the other half of the sister troupe, Judy Haynes, is the perfect fit as the woman who finally tames Phil. Kleiner shows off her dance talent in the rousing tap number that kicks off the second act, I Love a Piano

Missy McArdle as the innkeeper's assistant, Martha Watson, is given the big, brash showstopping number, Let Me Sing and I'm Happy. There's no way to not bring down the house with this number and McArdle pulls out every trick in her veteran's acting bag to make sure Happy steals the show.

The Wick uses recorded music, but the track is rich and doesn't distract from the proceedings, and hats off to resident musical director Michael Ursua who is able to balance the tracks with having his singers create the live vibrancy of Berlin's wonderful tunes. Truth be told, a full orchestra backing this production would be the quintessential icing on this luscious holiday offering.

Coming close on the heels of the Wick’s impressive debut with The Sound of Music, White Christmas had the proverbial hard act to follow. But even without that comparison, one cannot miss how lackluster and listless this naturally ebullient musical now seems

In the Crosby role, James Cichewicz is a capable crooner, but seems at sea whenever the music stops. Cannon Starnes takes on Kaye’s part, but misses the humor in it. Similarly, Kelly Shook (Betty) has a pleasant singing voice and Julie Kleiner (Judy) dances proficiently, but they must have been absent for personality rehearsals.

Fortunately, the charisma void is filled by Mermanesque Missy McArdle in the relatively minor supporting role of Martha, the inn’s bookkeeper. For no particular reason, she belts Let Me Sing and I’m Happy and the show momentarily comes to life.