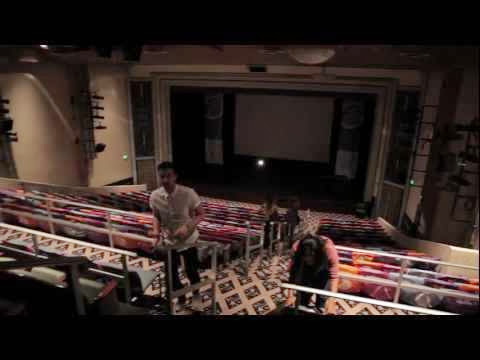 No, we weren't copping out with the post about the Holiday Party.  A lot of news stories have come out, and we've been remiss in getting them to you.

But first, we want to point out that a lot of theatres are offering Cyber Monday deals; check in with your favorite companies to see if you can get a great deal.  Tickets make great gifts!

Today's "dark" theatre is the Colony, in Miami Beach.  In January, GableStage will be presenting Antony and Cleopatra there, instead of in its tiny venue at the Biltmore Hotel.  And you can help get it on stage!  You'll read all about that, and more, on your Monday reading list:

Must Be The Season
It's absolutely the height of the theatre season, as Florida Theater On Stage counts down everything that's playing in the next week or so:

There may be 12 days of Christmas, eight days of Hannukah and seven days of Kwanzaa, but there are 31 days of theater in South Florida underscored by the coming week in which at least 11 shows are opening in
addition to at least 11 already open and at least seven more are opening later in the month.

If you're looking for Holiday related fair, The Drama Queen runs those down for you.  For kids, for grownups, for the whole family, Jewish or otherwise, and even in Spanish, you'll find something playing that will suit your holiday mood.

Shiny....
We mentioned the Remy and the Silver Palm Awards in our earlier post, but Broadway World is collecting votes for its own Miami Broadway World Awards.  Vote for your favorite South Florida actor now!  Of course, BWW doesn't have a firm grasp on what constitutes "south Florida," but you'll recognize most of the names. And the judges are YOU, the theatre-going public. Vote early, and vote often.

Speaking of Reaching Out to The People
Florida Theater On Stage fills us in on GableStage's Kickstarter campaign to fund its portion of Antony and Cleopatra, their co-production with New York's Public Theater and The Royal Shakespeare Company. These two much larger companies have raised the stakes for tiny GableStage; for the first time, they are not only having to find housing and rental cars for actors, but they are also staging it at the Colony Theater in order to accommodate larger crowds, and to allow more students to see it during its run.  We suspect that their share in this one production is probably greater than their usual yearly budget - or darn close to it.  It would have to be, with the participation of actors and creative teams based in New York City and London, England.

Kick in a few bucks; it's good for your soul.

But Will It Make US Laugh?
uVu Video Blog interviews the director and some cast members of Making God Laugh, opening this week at Actors' Playhouse at the Miracle Theater.
Posted by C.L.J.