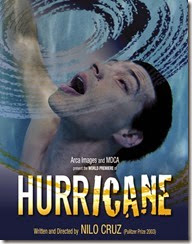 A severe tropical storm displaces the soul of a man and the lives of his family when Forrest Hunter, a catholic missionary, living in a Caribbean island suffers an accident that leaves him injured not only physically but also mentally with a case of amnesia. Will his wife Ria and his adopted son Aparicio help him recover his memory so he can lead a normal life?  Or is his past unreachable and unattainable?  The answer is revealed through an unexpected sacrifice, a path of redemption, which turns out to be a celebration of humility, generosity and kindness.  Hurricane is an uplifting allegory that soars beyond the limits of existence to the immense power of human will and the rediscovery and reconstruction of life.

The meteorological tempest dies down, but the emotional tumult rages on at a Cat 5 level in Nilo Cruz’s superbly staged world premiere of Hurricane, getting a criminally brief run at Arca Images in Miami.  Rarely do South Floridians see such a highly polished and boundlessly inventive alloy of words, sounds, movement and stage pictures as Cruz does here directing his own expansion of a previous short play into a full-length work.

…savor Cruz’s ability to create poetic metaphor out of the most everyday vocabulary, his ingenious use of set pieces… his endlessly varied use of body language bordering on modern dance, his ability to help his three actors wrench glowing emotion from their souls.  This is precisely what so many non-traditional companies aim for and only occasionally come close to achieving.

The level of performance can be seen in the actors’ eyes ablaze with pain, love, fear, joy, guilt and agony. Each embraces Cruz’s lyrical vocabulary and rhythms. Elam, in particular, makes the stylized dialogue and speeches sound absolutely organic when they are decidedly not naturalistic at all. Words pour from her mouth in a lilting torrent like the runoff after a storm and she aches so profoundly for her family that you can almost touch it.

Falcón’s extensive experience on stage and film allows him to inhabit Forrest as if it is a suit of tailored clothes. He is especially skilled physicalizing Forrest’s injuries, the left foot dragging under a wheelchair, the jutting chin, the curled shoulders, the nervous twitch of the head as if he had palsy. Above all, his piercing dark eyes are awash in Forrest’s confusion and pain.

Barbosa convincingly plays an adolescent consumed with an inferno of guilt. He courageously throws himself into Aparicio’s unending angst. It takes a skilled actor like Elam and Falcón to sustain this heightened level of emotion convincingly for 80 minutes. Barbosa, who never operates at anything lower than 8 or 9 on the scale the entire evening, doesn’t have the chops yet to pull this off and, after a while, you may wish he would just dial it back a little bit.  On the other hand, he excels in one of the production’s greatest strengths – Cruz’s choreographic staging of movement.

Fernando Teijeiro’s simple set encompasses the swirling eye of the hurricane that remains swirling on the floor of the stage and a backdrop of rent-apart debris from the storm. That extends to the Juan Carlos Velasquez’s two-story tall projections of roiling swells in an angry sea of almost mythic proportions.

Under Cruz’s vision, the costuming by Gema Valdés and mercurial nimble lighting by Gary Lund is peerless. Kevin Kennedy’s sound design provides the frightening aural hurricane with its raging winds and pounding surf as well as a musical soundtrack brimming with Caribbean percussion and ancient chants.

Nilo Cruz tested the often stormy waters of bringing a new play to life with a short version of his imaginative drama at the 2010 Ringling International Arts Festival in Sarasota. …a full-length Hurricane is getting an official, if fleeting, world premiere at the On Stage Black Box at Miami-Dade County Auditorium. The third collaboration between the Pulitzer Prize-winning Miami playwright (who doubles as director) and producer Alexa Kuve, Hurricane is markedly different in style from their Spanish-language Hortensia y el museo de sueños and the haunting English-language Sotto Voce.

…the new play’s still-slender story is told as simply rendered physical theater. A few of its effects — the roiling, projected sea; the swirl of hurricane-like lights — are impressive. But a worse-for-wear luggage cart, milk crates, umbrellas and a wheelchair constitute the “set.” Hurricane is far more interested in the internal struggles of its characters than anything that doesn’t belong to the natural world around them.

The script contains whimsical humor, poetic imagery and plenty of emotion for the actors to play. Falcón’s striking Forrest is tormented and tender. Elam’s Ría is a protective mama bear determined to restore order to her familial world. And the Havana-trained Barbosa makes Aparicio a physically and emotionally impetuous kid burdened with guilt over his father’s condition — Forrest was, after all, looking for his missing son when disaster struck.

At the top of the show, with the hurricane hitting full force, the sound of the storm all but drowns out the dialogue. Yes, hurricanes do roar, but in a play, words need to be heard. Or read: The supertitles need to be visible to all. Cruz the playwright should have a chat with Cruz the director before Hurricane winds up its brief run Sunday evening.