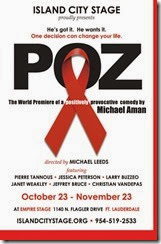 Island City Stage opened its production of POZ at Empire Stage on October 23, 2014.

Island City Stage presents the world premiere of the comedy POZ, the story of Edison, a handsome young man with leukemia who can only get insurance to cover his chemo if he's HIV+. Robert is an older man, HIV+, and a self-proclaimed "sex pig" trying to change his life. Each has what the other wants. But what will they do to get it? Toss in an aging stage star, an eccentric medium, an old-school queen and a ghost and you get POZ, an extremely funny, thought-provoking, totally unconventional love story.

The premise of POZ, a play by Michael Aman now getting its world premiere in Fort Lauderdale thanks to Island City Stage, may be off-putting or barely believable to some.   But know this: Aman’s comedy (yes, POZ is most definitely funny, as well as insightful, touching and deftly written) is a largely wonderful new work that is likely to have a life beyond this first production.

Performed at Empire Stage, the play blends realism with other-worldly fantasy in a script that’s fresh, smart and laced with inside-theater references — not surprising, given that Aman has a doctorate in theater history.

Director Michael Leeds, Island City’s associate artistic director… has cast POZ beautifully, and the actors tap into the piece’s lighthearted, stylish spirit. The one character that doesn’t quite work is Arthur, though that’s through no fault of actor Christian Vandepas. Arthur is both a link among the others and a symbol of the time before effective treatment commuted what was too frequently a death sentence. He is meant to be comforting, but tonally, Arthur seems to be in another play, and this one might be better off without him.

Peterson, a Carbonell winner too seldom seen on South Florida stages these days, grandly owns the role of Catherine, an actress who has seen it, done it and played it all... Likewise, Jeffrey Bruce as a caseworker (and proud theater queen) named Oscar and Janet Weakley as Maia, a kooky lesbian medium who happens to be Oscar’s ex, ride the waves of Aman’s comedy like champion surfers.

…Tannous is sweetly charismatic and captivating... He also shares a small sample of his fine singing voice as Edison belts Mary Todd’s Song (with music by Leeds), supposedly a fondly remembered solo from the only musical Catherine ever attempted.

As Robert, a once sexually voracious Log Cabin Republican lawyer who might represent the solution to Edison’s problem, Larry Buzzeo conveys the humor and crumbling defenses that just might make an unlikely pairing work.

With POZ, Island City adds to its reputation as a company whose work is significant and engaging.

Michael Aman’s play is getting its world premiere... Loaded with lots of laugh lines and inside theater jokes, POZ has some supremely likeable characters. You’ll root for whatever they toss at you during a multitude of vignettes (10 in the first act, 10 in the second).

The playwright… knows how to create comedy. Yet there’s just something a little bit too snappy about POZ. For all of its positives, it has one negative — it tries just a bit too hard, especially when it comes to convincing the audience that this lively cast of characters are real people with real problems. They feel paper thin and as airy as the sky blue of Michael McClain’s beautifully cloud-filled painted set.

Peterson and Tannous are the standouts with Peterson winning the audience over in the first five minutes as she barks at the non-existent building’s superintendent (you may detect a bit of Lauren Bacall).

Weakley wears the character of Maia as comfortably as the floppy clothes Peter A. Lovello has her dressed in.

Buzzeo and Bruce are at their best when they banter as old buddies at a gay bar, reminiscing in Act One, vignette 7, about days gone by, but Buzzeo is not wholly convincing of Robert’s checkered sexual past. Christian Vandepas has one of the most difficult roles... Aman has him passing in and out of scenes, yet never really fully connecting with the other characters. The actor does so with a light as a feather approach and it works.

Director Michael Leeds is the foundation of this play — taking a script that is built on vignettes and finding a way to make each segment seamless. If not for the directorial talent here, the potential for POZ under less skilled hands could have been choppy. But Leeds moves his actors through the scenes at a solid pace which keeps everything consistent.

The brilliance of this world premiere by Island City Stage is in the script, which alternates its humor between a warm glow and sharp, laser-like bursts. And then, there's the near-perfect cast, fairly beaming with joy at getting a crack at such carefully carved characters. It all adds up to something simultaneously dark and light that, for the audience, feels so good to bask in.

…playwright Michael Aman finds the most unlikely path, constantly surprising with the off-ramps he chooses, each of them shockingly funny and breathtakingly beautiful. It's as if he looks at the chessboard he has populated with different eyeglasses, seeing moves and points of focus in the varying lenses that the rest of us might not even glance at.

Director Michael Leeds hits us with his whole arsenal, shaping the pacing and laughs into something that comes off equal parts flighty fantasy and hardcore reality. He even writes a song, a rib-tickler from a long-ago musical in which Catherine played a dirge-singing Mary Todd Lincoln. In fact, the only misstep is with Arthur, who is sometimes way too close to the living on Michael McClain's airy cloud-strewn and bright-blue set. But that's a trifle that can be easily fixed with blocking.

This is the first full staging of "Poz," but no doubt you will see it again. The piece is irresistibly theatrical and inevitably cinematic.

It's first time up for POZ at Island City Stage and it's up with a bang. It's funny, it's tender, and it rings with truth.  Written by the witty Michael Aman, directed by the super Micheal Leeds and with a strong cast, POZ is a love story with people we care about. And did I mention it's mostly hilarious? And when it's not hilarious it's merely funny.

If there's such a thing as farce with a heart, then POZ is it. Michael Aman's story of a young man with cancer would be a two hour depressant in lesser hands but the writer, director and cast have produced an intricate show with complex relationships that despite the need for a little editing here and there is a banging success.

Island City Stage presents its production of POZ at Empire Stage through November 23, 2014.