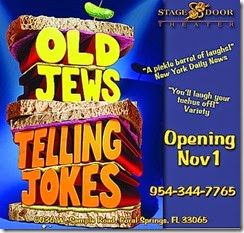 Get ready for an outrageous evening of one-liners, double-entendres and hysterical routines sure to triple you over with laughter! OLD JEWS TELLING JOKES showcases five actors in a comedy that pays tribute to and reinvents classic jokes of the past and present. The show also features comic songs—brand-new and satisfyingly old—as well as tributes to some of the giants of the comedy world and to the Old Jews Telling Jokes website, which inspired the show. Like rye bread, kosher pickles and bagels, this show is for everyone! You'll laugh 'til you plotz.

Showbiz is unpredictable, and while Stage Door’s production provokes its share of laughs, giggles and smiles, it’s a long way from the perfect fit the producers must have imagined.

Some of the problem stems from the show itself, which is filled with hit-and-miss material. Some comes from the execution under Peter Loewy’s direction. At the moment, at the beginning of a long run, Old Jews Telling Jokes is gently funny, but it’s more often a letdown than a laugh riot.

Just watch the black-and-white footage of the late Alan King working a joke to grasp the kind of timing and delivery that fueled decades of Catskills comedy. Showing those snippets in the second act is a little jarring, and juxtaposing King’s masterful style against jokes that land with varying degrees of success doesn’t help the actors.

Chisnall and Brooke are the brightest spots in the cast, besting their elders in terms of quickly morphing into different funny characters with spot-on timing. Small plays the blustery old guys, particularly one named Morty, with an appropriate world weariness. Prayz is more of a character guy than a comedian, and Byer often struggles with timing and style.

Old Jews Telling Jokes at Broward Stage Door is precisely what it wants to be and precisely what you think it will be. If it sounds mildly engaging, you will be delighted, for what they want to do, they do very well. The three busloads of condo commandos attending Wednesday’s matinee were rapturous. But if this isn’t your cup of kreplach, stay far away because you’ll feel this brand of humor is close to its past due date.

The ludicrous conceit is that someone starts to tell a joke, but the others act it out… This sounds ponderous and unworkable when written out here on the page, but this cast delivers this material with such unbridled abandon and joy, that it sort of works. So a tip of the yarmulke to the indefatigable Gail Byer, Ben Prayz, youngsters Adam Chisnall and Ashley Brooke. First among equals though is Michael H. Small who gladly immerses himself in this silliness, channeling Zero Mostel, Mel Brooks and a dozen other legends. With his luxuriant beard, balding pate, round eyes and Brooklyn-Bronx brogue, he seems born for the part.

If anyone in this cast didn’t already know the timeless rhythms of comedy honed in vaudeville up through ’60s sketch comedy (pointedly avoided by Saturday Night Live), director Peter Loewy made sure that every bit was beat perfect and that the whole thing moves swiftly.

So if you like your humor with a bit of mileage on it and marinated in borscht and chicken broth, this show was meant for you. Otherwise, well, Hedda Gabler is playing at the Miami Theater Center.

Few shows are titled so accurately and succinctly as the off-Broadway hit, Old Jews Telling Jokes, unless, of course, it’s Cats. But I digress. Nor is there a show more suited for South Florida. For we certainly have Jews in abundance and, judging from the audience at the Stage Door Theatre, we also have plenty of old people. Just wait long enough; you could become one of them.

Some of the jokes are so old, you will surely — “Don’t call me Shirley!” — be able to come up with the punchline before you hear it from the stage. But in many cases, it is the way the performers milk the set-up, tossing in amusing details, that makes the punchline all but irrelevant. Still, bring along a pencil, for you will want to scribble down some of these jokes so you can be the life of your next dinner party.

In fact, even the cast is not particularly old. Well, Michael H. Small, whose performance career has spanned more than 40 years, probably qualifies, but Ashley Brooke and Chisnall are comparative youngsters, while Gail Byer and Ben Prayz are somewhere in the middle age-wise, made up to look older than they are. And whatever their religions are, it is easy to accept them as all as Jewish, for they understand the cadence of jokes and know how to deliver a punch line.

If you had an Uncle Irv or a Cousin Jake who had a pipeline to funny stories, you wouldn’t need Old Jews Telling Jokes. But go anyway, have a little fun and gather some material for when the family gets together for the holidays.

Either this is your thing or it is not. It's as simple as that. If you prefer Henny Youngman over Chris Rock and don't mind your funny just a little less than fresh, then settle back and let it wash all over you in wave after wave of nostalgia. The cast of Michael H. Small, Gail Byer, Ben Prayz, Adam Chisnall and Ashley Brooke sell it as hard and adeptly as anyone can hope for. And the shows creators, Peter Gethers and Daniel Okrent, clearly have a feel for the material, even if the revue needs a rim shot almost as much as it needs pianist David Nagy.

But be forewarned, this show is decidedly blue with plenty of blush-worthy fare. It's no accident that "Old Jews Telling Jokes" started out as a website. You know the kind of raunch you can find on the Internet these days.