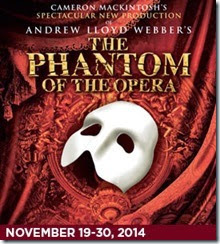 The new national tour of The Phantom of the Opera opened at the Broward Center for the Performing Arts on November 19, 2014.

Following an acclaimed sold-out tour of the United Kingdom, Cameron Mackintosh's spectacular new production of Andrew Lloyd Webber's phenomenal musical success, The Phantom of the Opera, is coming to the Broward Center as part of a brand new North American Tour. Hailed by critics as "bigger and better than ever before," this production boasts many exciting special effects including the show's legendary chandelier, new scenic and lighting designs, new staging and choreography. The beloved story and thrilling score will be performed by a cast and orchestra of 52, making this Phantom one of the largest productions now on tour.

For all the derision and adoration that the basic material has engendered over 28 years, the thoroughly-retooled The Phantom of the Opera gliding over a fog-shrouded lake into the Broward Center remains a sturdy craft buoyed by a soaring muscular score delivered by a talented crew.

The scenery is markedly different but no less grand, the choreography has been inventively expanded; the atmospheric lighting is superb; the acting seems better than in recent visits; the overall direction is strong with some asterisks and it has been many years since we’ve heard the orchestra envelop the audience with such rapturously swelling and soaring sound. The only holdover element besides the orchestrations is the late Maria Bjornson’s costumes that no one could improve upon.
As a result, the production exudes a freshness that will surprise season ticket holders reluctant to see the show one more time.

…as fine as the production is and as admirable as the cast may be, some of the magic has disappeared in the return. For instance, even though Christine and The Phantom are more physical here – he actually touches her a few times – the latent sexiness is AWOL. Because Macintosh has cast a young hunky Phantom (as they did in the 2004 film), the daddy issues that added a bit of frisson are also missing. In fact, returning audiences will feel something ineffable is missing this round.

Grodin has a fine expressive voice, comfortably hitting everything from the subterranean low notes to the near falsetto. He competently delivers “The Music of the Night” and really nails “The Point of No Return,” which drags in other productions. His acting, which seems a bit one-dimensional for the first two-thirds of the show, finally blossoms in the final third to justify why he was hired. But there’s not a lot of sexiness, not much evidence of a tortured soul, nor much mercurial menace.

Praise too is due Ben Jacoby in the eternally thankless role as the cartoon hero Raoul. Jacoby also manages to find some depth in this underwritten role pulled straight from a melodrama…

The outgoing cast that has been together a year is uniformly strong, including Jacquelynn Fontaine’s diva Carlotta and Brad Oscar as Fermin.

Connor has imposed a more intimate, less Grand Guignol comic book feel to the proceedings. Along with choreographer Scott Ambler, the whole enterprise seems to be in motion more than its predecessors… On the other hand, the set design has large empty spaces in the middle of the stage for the dance numbers; that means Connor more obviously keeps his two to three actors in intimate scenes careening around the empty space like pool balls after the break.

The last word or note belongs to the orchestra, a combination of five travelling musicians under the baton of Richard Carsey, plus 10 locals. Perhaps it’s that three of the slots are electronic keyboards that can imitate any other instruments, but the rich confident sound signals once again that this is no gimcrack bus-and-truck tour.

Phantom purists aren’t likely to be as taken with the new production as they were with director Harold Prince’s thrilling original, which is now Broadway’s longest-running show and is also the version playing in London. More casual Phantom fans or anyone new to the musical will probably enjoy director Laurence Connor’s take on the piece, though the tone of the touring production is much more broad and melodramatic. There’s a fine line between period style and cheesiness, and every so often Connor’s cast steps into the fromage.

The outgoing stars are excellent singers with the training and talent to mine the emotions in Lloyd Webber’s soaring music — Grodin especially on Music of the Night and All I Ask of You, Udine on Wishing You Were Somehow Here Again and her duet with the dashing Jacoby on All I Ask of You. In addition to Fontaine and Frank Viveros as the tenor Piangi, both of whom convey their characters’ operatic style and personalities, the production features the fine and funny Brad Oscar and Edward Staudenmayer as the opera managers.

That The Phantom of the Opera is playing the Broward Center for the fifth time is a good thing... The new Phantom, though, also features both literal and figurative smoke and mirrors. The show is opulent, lovely to listen to, but not an improvement on the inventive original.

This version is funny, focused and filmic, a grounded production that makes more sense than the previous four Broadway road tours that have come to Fort Lauderdale, stretching all the way back to 1991, when the show inaugurated the Broward Center.

…The arrangements are less bombastic, revealing snatches of exposition and motivation that once were muffled (shadow puppets help fill in the blanks). Yes, some of the grandeur is gone. This is no rococo rehash. "Phantom" purists will purse their lips over the narrative tweaks and new chandelier, pyrotechnics and sets.

It all boils and roils down to a grittier musical, even though the Phantom seems a little less maniacal, while the prima donna Carlotta (played with zest by Jacquelynne Fontaine) is much more of a diva.

That's not the only change. Sunday night's performance was the last for Cooper Grodin (spellbinding) as the Phantom; Julia Udine (stunning) as Christine; and Ben Jacoby (soulful) as Raoul. They will be replaced by Chris Mann (a 2012 finalist on "The Voice"), Katie Travis and Storm Lineberger, respectively.  It remains to be seen if the new cast can inject songs such as "Think of Me," "The Music of the Night," "Prima Donna," "All I Ask of You" and "Masquerade" with the same delicious, pulpy romance as their predecessors.

Lloyd Webber’s tuneful score and Maria Bjornson’s stunning costumes were retained, but Webber and producer Cameron Mackintosh entrusted fellow Brit Laurence Connor to helm a fresh interpretation, along with choreography by Scott Ambler and a set by Paul Brown, that would focus less on the spectacle and more on the characters and their relationships.

This production is still opulent by road show standards, but it is not the near-Broadway clone that forced performing arts centers across the country to knock out walls just to accommodate the massive sets.

…the biggest flaw in this production, if the emphasis is to be on the characters and their love triangle, is the acting. Cooper Grodin’s Phantom is too young and lacks the gravitas at nearly every entrance. The tortured soul is lost in his performance. His is also by far the weakest voice of the leads, failing to cut through the rich orchestrations performed by a 15-piece pit…

Udine capably handles the massive vocal demands of her role while embodying the naïveté of her young dancer. Ben Jacoby, as Christine’s childhood friend and hopeful suitor Raul, boasts the strongest voice of the three and much more charisma than Grodin.

There is still much to like in this production, even if it is unlikely to make its way to Broadway. The supporting cast is uniformly excellent throughout, the costumes are breathtaking and Connor maintains a brisk pace.

The Phantom of the Opera has become one of the most popular musicals in the history of musical theater. This scaled down version captures some of the beauty of the original version while adding some new charm of its own.

The cast for this tour had some standout performances, some adequate performances and some questionable ones. In the standout category, Jacquelynne Fontaine out-sang every single other person on the stage during her portrayal of Carlotta Guidicelli, the slightly past her prime opera diva. Fontaine has a true coloratura soprano voice with easy high notes and was the only member of the company that sounded as if she might have an operatic background.

…Julia Undine gave an adequate if somewhat uninspired performance. Her big high E flat at the end of the title number was definitely not prerecorded as she did not quite hit it accurately. Her singing overall was overshadowed by that of Fontaine.

In the romantic role of Raul, Vicomte de Chagny, Ben Jacoby was pleasant if somewhat unmemorable. His singing was adequate and he is an attractive man.

As the title character, Cooper Grodin seemed too young and too handsome. Grodin's singing voice leaves much to be desired. His low notes were some of the most unpleasant vocal sounds in the show and his high notes were not much better. As long as he was in the middle of his voice, it was O.K

Overall, this production pales in comparison to seeing "The Phantom of the Opera" in New York, but in the end, it was not the scaled down set but rather the lackluster cast that dimmed the sparkle.

The Phantom of the Opera plays at the Broward Center for the Performing Arts through November 30, 2014,