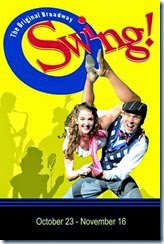 The Wick Theatre opened its production of Swing! on October 23, 2014.

A joyful celebration in both music and dance, SWING! is full of incredible hits from the greatest era like It Don’t Mean a Thing, Hit Me With a Hot Note, Harlem Nocturne, G.I. Jive and Stompin’ at the Savoy. As this enthralling song-and-dance show makes abundantly clear, swing was never a time and place, it was always a state of mind!

Bodies seem to fly through the air and end up in a plethora of entwined positions worthy of a terpsichorean Kama Sutra in The Wick Theatre’s thrilling musical revue Swing… This will spoil South Florida audiences for years to come as to what a musical revue should be. You don’t even have to like this kind of show or this music to be carried away by the enthusiasm and imagination.

Much of the success is due to musical director Paul Reekie (a vet of shows for Arts Garage and Palm Beach Dramaworks) and, even more so, to recent Miami transplant Kelly Shook (in The Wick’s White Christmas) whose choreography and direction is as imaginative and varied as can be conceived. The penny-bright polish, precision and verve that these two have imposed elevates this celebration of music and movement from jitterbugging to country line-dancing.

The lovely Lindsay Bell and knife-sharp Charles South are paired off in some of most outstanding moments of the show, but never better than in an elegant delicate pas de deux that melds en pointe ballet with modern dance in “I’ll Be Seeing You.”

Phillip Attmore and local stalwart Christopher George Patterson leading the group in a percussive tap to Charlie Parker’s “Bill’s Bounce” that threatens to break to the floorboards of the stage.

The rail-thin Ashley Klinger in several numbers in which she does splits, leg extensions and just movements with her limbs that seem impossible.

Although they dance a bit, much of the singing is carried by the solid baritone of Michael Ursua, a frequent musical director at The Wick, and Alix Paige, a Florida native who has returned for shows at Arts Garage and Palm Beach Dramaworks, and who hits stratospheric notes here.  Both caress with these songs assurance, but they deliver a stunning extended showcase of impossibly nimble scat singing while portraying prickly lovers in Duke Ellington’s bebop “Bli-Blip.”

Every dancer can sing, but Shook and Reekie astutely identified Amelia Millar as having one of the loveliest voices in the entire troupe. She proves it with heartbreaking non-dancing renditions of Johnny Mercer’s “Skylark” and later “Cry Me A River.”

But the big news is that The Wick has hired a live band after saving money last season using digital music for all but the last show. The bright, full sound makes all the difference… the most memorable moment of the entire evening is Jason Pyle’s expressive trombone in a musical conversation with Millar’s crooning “Cry Me A River.” (You’ll be humming this for an hour after the show ends).

For years, Sean McClelland has created impressive environments for small theaters with virtually no budget such as his war-torn hell in Outré Theatre Company’s An Illiad. But now, with some money to work with, he has created a gorgeous period bandstand and jazz club under Art Deco arches, evocatively lit by Jose Santiago whose designs snap from one to the other on the opening beat of a segue.

Heads snapping, limbs elevated at every angle, men flipping women around their backs like Hula Hoops, and expressions of pure joy suffusing everyone’s Pepsodent smiles. Swing is an unqualified delight.

"Swing!" — the blast of a show now at the Wick Theatre in Boca Raton — starts out soft.  Michael Ursua sings a few bars of Duke Ellington's "It Don't Mean a Thing if It Ain't Got That Swing" all sweet and sotto voce. And then —bam! pow! — the show goes from 0 to 60 miles per hour...  From then, with high-flying dancing and why-aren't-they-winded pacing by director-choreographer Kelly Shook, "Swing!" rarely shifts below third gear, really earning that exclamation point in its title.

Through all its whiz-bang staging, the revue, which lacks even a word of dialogue, does a remarkable job at keeping the music center stage. If pressed, one could wish for more limber in the timbre of some the vocals. But the band, under the direction of Paul Reekie, is funky and loose enough to compensate for any shortcomings.

The only problem, and it's a good one to have, is the show has nothing but stars. Featured soloists Alix Paige and Ursua really wail. The 12 dancers really swing, and also sing. Even bass player Dave Wilkinson and trombonist Jason Pyle step to the apron of the stage for turns in the spotlight. The production has ruined the grading curve for any other revue by a South Florida theater, because once local audiences see this, expectations will be raised.

Give your mind a rest and just “Swing!”

…yes, "Swing!" is unapologetically nostalgic. What makes it special are the superbly limber, agile, athletic dancers male and female. The stage is set by the 1931 Duke Ellington classic "It Don't Mean a Thing" (If It Ain't Got That Swing), and the action continues non-stop for 24 numbers, with a brief intermission and another 11 numbers concluding with a big all-star finale.

In all there are an even dozen dancers with Lindsay Bell the captain under the overall direction of Kelly Shook. Featured singers are Alix Paige and Michael Ursua and there is an onstage band led by pianist and musical director Paul Reekie. A special tip of the hat to trombonist Jason Pyle, who makes his instrument "talk" with a mute on the showcase number "Cry Me a River" with Amelia Millar and Pyle trading vocal and instrumental licks.

This show transports me back to my formative years when our father, a Big Band fan of the first order, played the music of the Dorsey Brothers, Glenn Miller, Benny Goodman, Woody Herman, Count Basie, Fats Waller and Frank Sinatra at maximum volume, much to the annoyance of our neighbors. There are few things in life as happy and optimistic than music of the Big Band era. If you need a lift, here it is.

The Wick Theatre has jumped into its second season in grand fashion with a pumped-up production of Swing!, a musical tribute to the era of big-name jazz and high-stepping dance.

On the energy scale, Swing! is equivalent to The Sound of Music, the show that excellently kicked off the first season at the Wick. This paean to swing doesn’t have a story line. Each tune blends into the next without dialogue, but the song-and-dance combos seem to be built around internal tales.

Ursua’s rendition of “Throw That Girl Around” is taken quite literally by the dancers. And the nostalgic ballad, “I’ll Be Seeing You” presents Paige singing while Lindsay Bell and Charles South do a Gene Kelly kind of ballet.

“Kitchen Mechanics Night Out” is a delightful fantasy, with Ursua taking over the piano duties while dancers Amanda Myers Tonsilleri and Andy Frank toil in a kitchen setting, downtrodden until they realize they can get out and dance.

You won’t find a better rendition of “Cry Me a River,” than the one by singer/dancer Amelia Millar, standing in the hot spotlight, just in front of Jason Pyle, who plays trombone in fine style.

All those busy feet are the responsibility of Kelly Shook, choreographer and director. Sean McClelland has crafted a visually pleasing set, with the band set on risers in the rear and a frame of lighted panels in front modulating between purple and pink. The musical direction by Paul Reekie is right on point — and very much welcomed.

Even if pulled off perfectly, the Wick Theatre’s “Swing!” would still be what it is: empty calories for Greatest Generation audiences. This nostalgic revue of ‘30s and ‘40s song and dance, which premiered on Broadway in 1999, is fundamentally unadventurous. And while director/choreographer Kelly Shook brings some ambitious ideas to the production, it still has all the edge of a circle and all the bite of a docile Chihuahua. The result lacks the infectiousness and the rambunctious wit that helped turn the Wick’s “Ain’t Misbehavin’” revue into a memorable romp

Shook’s choreography runs an inventive gamut beyond such swing variations as the jitterbug and lindy hop; injections of Latin dance, line dance, ballet and tap add welcome eccentricity to the production. With its ensemble of dancers shedding their work clothes for a night at the clubs, there’s a pulsating bawdiness to “Kitchen Mechanic’s Night Out”—the only bona fide showstopper in the first act..

…Ashley Klinger brings a feline quality to her supple movements, best represented in “Harlem Nocturne,” in which she seems to slink out of a stand-up bass. Other highlights include “Cry Me a River,” in which singer/dancer Amelia Millar harmonizes the rhythm with trombonist Jason Pyle; “Bli-blip,” in which Ursua and Paige engage in a dinner conversation comprised entirely of jazz scatting; and “Bill’s Bounce,” a tap-driven military number in which the dancers impossibly leapfrog over each other from a sit-up position.

The thing is, there are few moments of rousing excitement in “Swing!” Even the show’s pleasures are transient ones, unlikely to be remembered next year or next month. We know what the Wick is capable of, and with such a finite number of productions each season, “Swing!” makes for a questionable use of its resources.

The Wick Theatre presents its production of Swing! through November 21, 2014.