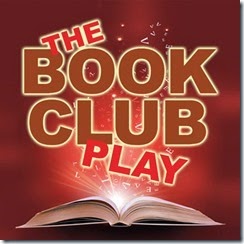 Actors’ Playhouse opened its production of The Book Club Play at the Miracle Theater on May 13, 2015.

THE BOOK CLUB PLAY is a delightful new comedy about books and the people who love them. When the members of a devoted book club become the subjects of a documentary filmmaker, their intimate discussions of life and literature take on a new meaning with the camera rolling. Add in the unexpected arrival of a provocative new member, and the sudden inclusion of some questionable titles, and long-standing group dynamics take a hilarious turn. This engaging new play is sprinkled with wit, joy and novels galore.

Karen Zacarías’ The Book Club Play, the newest Actors’ Playhouse production at the Miracle Theatre, would seem to have everything going for it.  Yet a show that should be buoyed by waves of laughter mostly produces bubbles of giggles and guffaws… this particular script isn’t nearly inventive or insightful enough to turn a craftsmanlike work into a gem.

It’s not that the actors, each of whom gets a solo cameo as a totally different character whose life intersects with books, don’t try. Tei is a master of amiable snark, relaxed yet riveting. Anthony’s deadpan, precisely timed delivery is a pleasure to take in. McKeever’s fussy, sweet Will fools no one but himself. Sloan is radiant and funny as the tightly controlled Ana, Fridh an amusing underachiever as Jen, and Elam an ingratiating yet ambitious woman who’s not afraid of speaking the truth as Lily.

Designers Jodi Dellaventura (set), Ellis Tillman (costumes), Eric Nelson (lighting) and Shaun Mitchell (sound) creatively dot all their “i”s and cross all their “t”s in realizing the world of the play. But in terms of substance, The Book Club Play is more like light reading than literature.


Inarguably, there are several laugh lines in Karen Zacarias’ mild smile of a comedy that has been bouncing around regional theaters for a few years. But what makes this mediocre script bearable is the hard work of the six actors under David Arisco’s encyclopedic knowledge of comedy staging.

Occasionally, it chooses an entertaining rib-tickler or an innocuous musical satire of contemporary life. Other times it chooses something so insubstantial that the audience shakes its collective head in wonder... But this is a pretty tame and predictable offering of a brand more often seen in third-tier amateur theaters. Nothing coming from a corps this solid could ever be awful or a waste of time, but this is an uninspiring evening despite those folks.

On the credit side, watch these six actors and Arisco bring their considerable craft to bear. While you can see them pushing this button and that, thank goodness that they do. No one is coasting and these folks can get laughs out of the Periodic Table of Elements. A special shout-out to Anthony who brings life and credibility to the thankless cartoon role of the everyday hubby who’d likely rather be in his mancave.

Actor's Playhouse has a reputation for producing plays with great production values, even greater casts and excellent directing under the helm of David Arisco, its resident artistic director. Its current offering, The Book Club Play is an excellent example of all of these theatrical elements coming together.

Sloan as Ana owns the stage. From her Nancy Regan dresses to her smile that masks her disapproval yet makes it clear at the same time that she is the epitome of the great hostess, except when the members realize she is writing a tell-all book about them. For his part McKeever has to struggle for laughs in the first act (a script problem) but is hilarious in act two when he discovers he is not the man he thought he was.

Elam and Fridh are as good as ever. Fridh is especially funny …as a New York book publisher. Paul Tei… is a delight. Watching him watching the members of the group as they slowly devolve, coupled with his nonchalant delivery, is a first rate acting lesson.

First among equals is Stephen Anthony...  His Rob is both witty and unpretentious. Contrast that with a laugh out-loud smaller role he plays as a Walmart employee and one can begin to see the depth of Anthony's considerable range.

Arisco's directing is inventive; he obviously enjoyed positioning his actors on the set as well as posing them for comic effect. Most of the cast is onstage the entire time, so this is no small feat. He also directs them to be aware of the camera on the fourth wall.


It takes an extreme mix of personalities to keep a two- hour-plus show entertaining. If the focus remained strictly on books, this would be an entirely different play altogether. But zaniness ensues when the club allows its meeting to be filmed by an unseen documentary filmmaker who not only captures their lively discussions but the personal revelations that inevitably leak out along the way.

…the show’s success lies with the quirkiness of the characters themselves, with surprising revelations coming as an outgrowth of their long suppressed desires. If not for Arisco’s always astute direction and a cast that fully inhabits all the subtle nuances of the people they portray, The Book Club Play would likely descend into an overly talkative academic experience rather than the enjoyable experience it actually is.

Naturally then, the audience becomes quickly enamoured with these characters, particularly McKeever’s Will, whose tentative enthusiasm makes him the most endearing, as well as Sloan’s fidgety Ana, whose devotion to duty becomes way beyond the realm of simply presiding over the meetings. Elam also attracts special notice as the club’s only “Akron-American” (a play on the fact she’s African American but also a former native of Akron Ohio), whose sway, sashay and clear interest in Alex find her practically stealing several scenes. Anthony, Fridh and Tei also deliver their characters’ ticks as effectively as well.

Taken in tandem, The Book Club Play is quite a hoot, a lively diversion capable of keeping its audiences enthralled. Anyone seeking some thoughtful evening entertainment ought to consider club attendance to be mandatory.


There's an all star cast working at Actors' Playhouse right now. And they're stuck in a morass of cliches, weak jokes, and sitcom plotting. It's the 2015 summer season opener, The Book Club Play.

Snatches of books are read and argued over. Moby Dick is the source of dick jokes. Are graphic novels comic books? Hard cover vs PDAs. Twilight books rule. Race. Questions of life are hammered into banality. Etc. Etc.  Someone is revealed as gay. (I'm free, I'm free.) Could it be the guy in the Brooks Brothers' clothing as casually mentioned by Ana? Husband Rob, who goes to the meetings only because they're in his house, watches the movies instead of reading and kisses Jen. On camera. Will kisses Rob. On Camera. Ana gets frazzled.

It's a swell set The Book Club Play is performed on. Large and luxurious, for Rob is a could be vice-president of a drug company. The numerous scene changes are covered by each of the actors showing their chops in cameos; characters hailing books. Good stuff.

And finally, two acts later, the characters pair up before the camera, one after the other, explaining to the reality world how they have now found happiness with their newly chosen partners. Curtain. Thank you.

The Actors’ Playhouse production of The Book Club Play runs through June 7, 2015.
Posted by C.L.J.