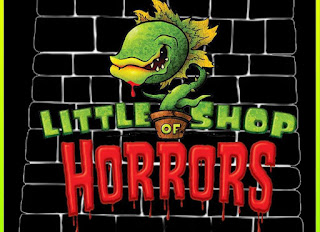 Slow Burn Theatre Company opened Little Shop of Horrors at the West Boca Performing Arts Theater on June 5, 2015.  It is their last production at this venue before moving to the Broward Center for the Performing Arts this fall.

The meek floral assistant Seymour Krelborn stumbles across a new breed of plant he names “Audrey II” – after his coworker crush. This foul-mouthed, R&B-singing carnivore promises unending fame and fortune to the down and out Krelborn as long as he keeps feeding it, BLOOD. Over time, though, Seymour discovers Audrey II’s out of this world origins and intent towards global domination!

Bidding Boca adieu, Slow Burn is doing a start-of-summer production of the 1982 Off-Broadway smash Little Shop of Horrors. Even if that would mean a bit of a road trip for you, the drive is worth it, if only to hear some of the region’s best actors sing the heck out of the Alan Menken-Howard Ashman score.

The stellar vocals aren’t the only thing Little Shop has to offer, though. Patrick Fitzwater’s direction and choreography, Andrew Gilbert’s musical direction, the cast’s acting, and the mad puppet duo of Rick Peña and Geoffrey Short (Peña operates the ravenous Audrey II, Short supplies the booming voice of the man- and woman-eating plant) all live up to the high bar Slow Burn has set for itself.

Westrich is earnest and adorable as Seymour... Miller Brennan finds the sweet, yearning-for-normalcy humor and the darker colors in Audrey, infusing Somewhere That’s Green with precisely controlled longing. Tanner, Miller Brennan’s real-life hubby, makes Orin a goofy yet decidedly unsettling bully with a killer voice, and he’s terrific in a variety of other quick-change roles. Korinko is all conniving bluster as Mushnik, and as the sassy “urchin” chorus, Alexander, Dikun and Dannielle add immeasurably to the droll tone and vocal richness of the show.

Peña and Short create the requisite bloodthirsty magic needed to make Audrey II as viable a character as any of the others.

...Slow Burn Theatre Company’s Little Shop of Horrors delivers a happy ending to its five-year partnership with West Boca Community High School...  to say goodbye, a grateful Slow Burn has delivered a kick-butt production of the not-so-cult-anymore musical hoot. The satire has been on the bucket list of several people in the company for years including director/choreographer Patrick Fitzwater. Their enthusiasm pours off the stage as evidenced by Mike Westrich’s near perfect rendition of the Everynebbish protagonist Seymour Krelborn.

...Brennan is the definitive Audrey seen down here or arguably anywhere else, including Ellen Greene, God bless her. Brennan’s blast-out-the-back-wall belting on “Suddenly Seymour” outshines any version on stage, film or recording. And her rendition of “Somewhere That’s Green” is a master-class melding vocal chops and musical acting. She, with Fitzwater’s guidance, finds that perfect mixture of risible farce and touching pathos of someone who yearns so profoundly for such a modest dream.

The cast is deep in the right groove including Korinko’s opportunistic Mushnik, Geoffrey Short as the basement bass voice of the plant, and Nicole Dikun, Christina Alexander and Elisa Dannielle as the doo-wop Greek chorus urchins... Tanner is hilarious as the ultimate bad boy Brylcreamed boyfriend – plus eight other parts including Life magazine maven Clare Boothe Luce. A special shout out is due to Rick Pena who designed the costumes, built the smaller iterations of Audrey II and operated all versions of the man-eating plant.

As usual, Fitzwater does a faultless job shaping this production. His choreography skills are on display in the girl group moves. But his imagination kicks in big time when Mushnik does a seductive tango with Seymour to bond with his new cash cow – because the steps are mostly drawn from Jewish folk dances and road shows of Fiddler on the Roof.

The fanciful depiction of a Skid Row, complete with a weirdly appropriate Van Gogh surreal sky, was designed by Sean McClelland. The ever-changing lighting was designed by Lance Blank, which must have kept Stage Manager Britni Serrano busy calling cues.

Little Shop of Horrors is a blast from the past.That is quite literally the case with Slow Burn Theatre’s production of the off-Broadway hit, in which the vocalists give the musical plenty of Broadway belt, putting much amp in the show’s camp.

...Slow Burn has become a divining rod for finding local singers with dazzling skills. Here, once again, the company has nailed it, with a cast that gives the score a rocking sock-hop wail with powerful, arching notes that turn the cavernous theater into a smaller, warmer place.